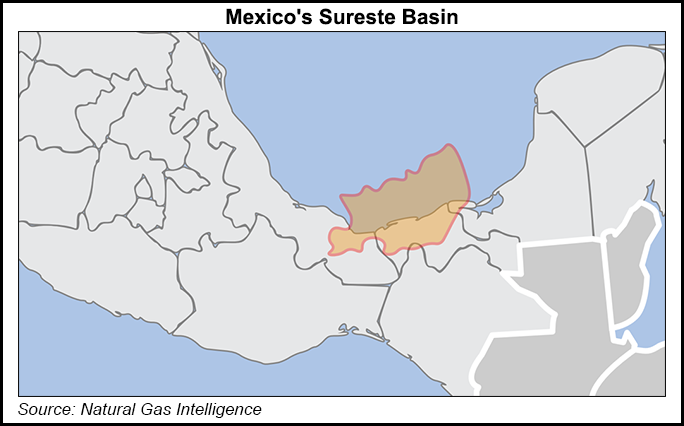 The decision was revealed Tuesday during a session of upstream regulator Comisión Nacional de Hidrocarburos (CNH).

CNH approved a modification of Pemex’s exploration plan for the block, which included scrapping the Asab-1 well.

Asab-1 had been meant to delineate how much of Zama, which a Talos-led consortium discovered in 2017, was located within the Pemex block.

Energy Ministry Sener in July 2020 instructed Talos and Pemex to draw up a unitization and unit operating agreement (UUOA) to jointly develop the project in Mexico’s Sureste Basin.

The parties have not yet reached an agreement, with Talos and Pemex each expressing a desire to be the project’s operator. At stake are terms including initial tract participating interest splits, mechanisms to redetermine those splits in the future, and operatorship.

An evaluation conducted by Netherland, Sewell & Associates Inc. in 2020 found that the consortium and Pemex held gross interests of 59.6% and 40.4% in Zama, respectively – in other words, that a majority of the discovery was located within the Talos block.

Pemex then said in May 2021 that the opposite conclusion had been reached in a new evaluation by an unnamed third party. This evaluation found that Pemex had a 50.4% gross interest, versus 49.6% for Talos and its partners.

The Asab-1 well was supposed to help the companies define the boundaries of Zama with more precision, and therefore help inform the drafting of the final UUOA.

Pemex’s decision not to drill the well means “that probably there won’t be a voluntary unification agreement,” Talanza Energy Consulting CEO Marco Cota told NGI’s Mexico GPI. He explained that the pieces are now in place for Pemex and energy ministry Sener to impose the terms of an agreement “without respecting the opinion of Talos.”

Cota noted that Pemex is under no obligation to drill the well, but that the well had been expected as a show of good faith in the interest of determining the correct gross interest of each party in Zama.

Commissioner Alma América Porres Luna questioned the decision by Pemex, noting that drilling the Asab-1 well would be the most effective way to reduce uncertainty surrounding the extension of the reservoir.

Citing CNH’s legally defined role as a technical advisor as well as a regulator, Porres Luna recommended that Pemex “not discard this well so that it can have greater arguments for the continuity of this discovery…”

Commissioner Héctor Moreira Rodríguez concurred, saying that the lack of a unitization agreement is delaying the start of production in a “high potential” area.

Moreira recommended that unless seismic data can provide the same level of certainty as an appraisal well, that Pemex should reconsider its decision to scrap Asab-1.

He said that as long as the unitization process is delayed, there will be no production on either side of the discovery, “and I think this has a very large cost for the nation.”