Mexican national oil company Petróleos Mexicanos (Pemex) is behind schedule and unlikely to achieve its drilling and production goals at the flagship Ixachi gas and condensate field in Veracruz state, according to new analysis by Welligence Energy Analytics. 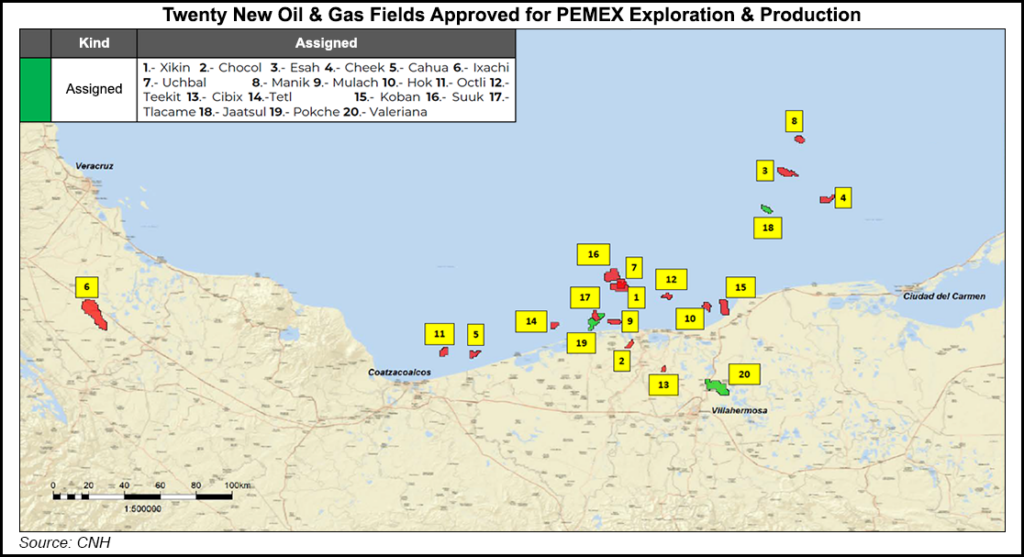 Pemex’s development plan at Ixachi entails the drilling of 24 wells in 2020, a goal that is “impossible,” Welligence’s Pablo Medina, vice-president of research, told NGI’s Mexico GPI.

“We believe they’re going to drill at most 10 wells next year,” Medina said.

Due to Ixachi’s technical complexity, Pemex will be hard-pressed to assemble enough drilling crews with the requisite experience to carry out the work plan in such short order, Medina said.

He explained that Ixachi is a high-pressure, high-temperature reservoir, and that Pemex is planning to drill wells at depths of 6-7 kilometers (3.7-4.3 miles), which would make them some of the deepest in Mexico.

The oilfield services contracts for the drilling of the Ixachi wells were awarded through an opaque, invitation-only process to local firms that do not necessarily have experience working in such unforgiving conditions, Medina said, citing that there have already been structural issues with one of the wells at Ixachi.

“This is the kind of stuff for which you would really want the top service companies,” Medina said.

The current government has set respective crude oil and natural gas production targets of 2.6 million b/d and 4.91 Bcf/d for Pemex by the end of president Andrés Manuel López Obrador’s term in 2024.

The government’s targets are “not doable whatsoever,” Medina said, adding, “it would be a good result if we stay flat by the end of the term.”

Ixachi is one of 20 fields deemed by Pemex as “high-priority” for reversing a 15-year production slide over the short-term.

The problem, Medina said, is that Pemex is “sacrificing certainty for speed” at these fields, in many cases skipping the appraisal stage.

He explained that, “what Pemex is doing, in order to truly speed up these processes, is not even drilling appraisal wells. They are going in many cases from a discovery well…to coming up with a development plan, and this is extremely unusual.”

Upon analyzing the development plans submitted so far for the priority fields, Welligence found that the plans’ assumptions are “quite optimistic.”

“There’s a lot of uncertainty around how much those wells will actually be producing, however Pemex is putting some production curves that look quite aggressive,” Medina said.

He added that, “their drilling schedules allow for no mistakes whatsoever.”

Most of the fields should not even be developed, Medina said, because they are too small to be profitable. The average breakeven oil price for the fields is around $52. WTI crude oil was trading at around $58/bbl as of Monday afternoon.

Pemex has listed a net present value of $0.01 for many of the fields, Medina said, offering further evidence of their unprofitability.

“When you start digging into the assumptions, what they assume for costs, for wells, their operating expenses, a lot of these things start feeling very artificial,” Medina said.

Medina said that Ixachi is the third most valuable field in Pemex’s portfolio, citing Mexico’s attractive fiscal regime for non-associated gas fields, and the high amount of natural gas liquids at Ixachi.

“What’s very interesting is that you have a lot of value living alongside a lot of risk, in terms of execution,” he said. “If Pemex doesn’t execute properly, a lot of value could be lost.”

Wellhead natural gas production by Pemex with joint-venture partners averaged 3.83 Bcf/d in October, down from 3.85 Bcf/d in the same month a year ago.

Dry gas production from Pemex processing centers averaged 2.16 Bcf/d, down from 2.37 Bcf/d in the year-ago month, an 8.6% slide.