Mexico’s Petróleos Mexicanos (Pemex) is moving in the opposite direction of fellow Latin American national oil companies (NOCs) by failing to embrace the energy transition and natural gas, according to a panel of experts. 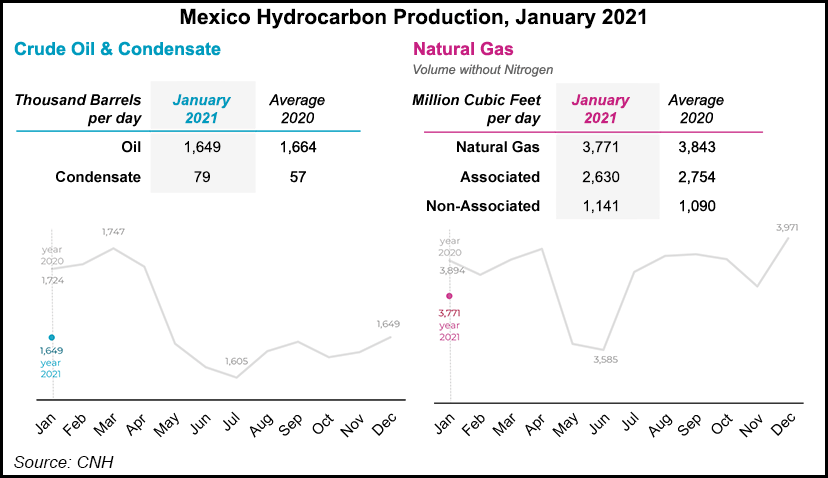 While NOCs such as Colombia’s Ecopetrol SA and Brazil’s Petróleo Brasileiro SA (Petrobras) have embraced diversification and environmental, social and governance (ESG) performance standards, Pemex and the government of President Andrés Manuel López Obrador instead are reverting to the business model of a bygone era, said panelists at an event in late February hosted by Rice University’s Baker Institute for Public Policy.

The López Obrador administration has reversed course to a model “going back maybe to the 1950s,” said Lourdes Melgar, nonresident fellow at the Baker Institute’s Center for Energy Studies. She explained that, “what is really at the center of energy policy in Mexico right now is a view where Pemex, and particularly oil production and oil refining have to be the center not only of energy policy, but also the motor of the economy.”

She cited that a combined 56% of public spending in 2020 went to Pemex, state power utility Comisión Federal de Electricidad (CFE) and energy ministry Sener, which is in charge of building the Dos Bocas oil refinery, López Obrador’s flagship project.

Almeida said that while Ecopetrol and Petrobras are making “at least…some efforts” in ESG, Pemex “is the worst case of all because the company is living in a very adverse business environment and the government agenda is the opposite of where the world is going…in terms of ESG and business itself.”

Melgar, who served as deputy hydrocarbons secretary under the previous government, also said that a recently passed, highly controversial power sector law in Mexico is meant to ensure that CFE purchases and burns at its power plants high-sulfur fuel oil produced by Pemex.

The law mandates that CFE’s hydroelectric and thermal power plants receive priority in the electricity dispatch order ahead of cheaper electricity produced by private sector generators.

The law essentially “eliminates the electricity market,” Melgar said, adding, “What is really at stake here is that Pemex needs to get rid of all the fuel oil that it is producing, which has a high percentage of sulfur…which as you all know, has no markets these days.

“So basically what they are doing is obliging, forcing [CFE] to burn fuel oil in its electricity production and basically they’re putting at the very end of delivery not only all of the private producers, but more importantly the renewable producers.”

Melgar noted that López Obrador has halted the awarding of new exploration and production contracts to non-state firms by freezing bid rounds, opting instead to try and strengthen Pemex through multibillion-dollar capital injections from the treasury and reducing Pemex’s tax and royalty burdens.

She explained that, “all the efforts are put into investing in Pemex and making sure that Pemex on its own can increase oil production.”

Melgar added, “By the way, there’s no effort to produce natural gas.”

The government has instead decided that Pemex should focus its efforts on shallow-water and onshore conventional oil resources instead of partnering with international oil companies to pursue Mexico’s immense deepwater and unconventional resources, Melgar said.

She also noted that Pemex is no longer an active member of the Oil and Gas Climate Initiative, and that the company’s routine flaring of natural gas increased by 68% in 2020.

The panel was kicked off by a keynote address from Ecopetrol CEO Felipe Bayón, who highlighted his company’s plan to reduce its climate footprint and increase the role of natural gas in its portfolio.

Among the core questions driving Ecopetrol’s strategy is, “How can we become a gassier company?” Bayón said, noting that the company aims for gas to account for 35% of its production by 2030, up from 20% currently.

Ecopetrol also aims to eliminate routing flaring of natural gas by 2030, and to monitor fugitive methane emissions at 100% of its production sites “within the next couple years,” Bayón said.