Mexican state oil company Petróleos Mexicanos (Pemex) reported natural gas production of 3.68 Bcf/d in November 2020, down from 3.87 Bcf/d during the same month in 2019. 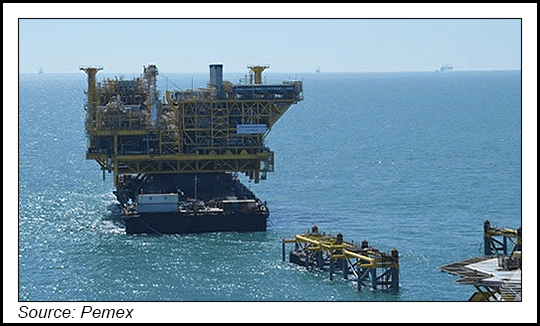 Natural gas output associated with oil drilling, aka associated gas, fell to 1.59 Bcf/d from 1.71 Bcf/d, while non-associated gas production was essentially flat at 1 Bcf/d versus 1.02 Bcf/d in November 2019.

Dry gas from Pemex processing centers averaged 2.2 Bcf/d, down from 2.37 Bcf/d in November 2019. The dry gas figure is a more precise measure than total gas production of the molecules that actually make it to the local market.

Natural gas prices in Mexico, meanwhile, which fluctuate in tandem with the U.S. prices to which they are linked, hit a 21-month high in November. U.S. prices have been boosted in recent weeks by surging demand for liquefied natural gas (LNG) exports.

The production figures come amid forecasts of a recovery in global oil demand and prices beginning in the second quarter of 2021, driven by the rollout of Covid-19 vaccines and substantial draws from crude oil stocks.

In addition to the havoc wreaked by the pandemic on oil prices and demand, Pemex has struggled to contain the spread of Covid-19 among its own ranks. As of Sunday, Pemex had reported a staggering 397 deaths from Covid-19 among its employees, along with the deaths of 941 retirees, 660 family members and nine external contractors.

Pemex had reported 11,544 positive Covid-19 diagnoses among a total population of about 750,000 employees, retirees and family members.

CNH approved Pemex’s exploration plan for the onshore AE-0135-Cuichapa allocation in the Salina del Istmo sub-basin of Mexico’s larger Cuencas del Sureste basin. The plan would entail investment of $17.6 million to $118.3 million, depending on the early exploration results, CNH said.

The regulator also approved a modification to Pemex’s exploration plan for the AE-0121-Tampico Misantla allocation that would target unconventional resources in the Tampico-Misantla basin.

CNH noted that this scenario would only occur “in the case of a change in current energy policy,” since President Andrés Manuel López Obrador opposes hydraulic fracturing. This scenario would see investment of up to $206.4 million by Pemex.

Hokchi’s 2021 work plan includes the drilling of five development wells and the completion of four wells at the Hokchi field off the coast of Tabasco state, and entails a budget of $250.9 million. The Hokchi exploration and production contract was awarded through Mexico’s shallow water Round 1.2 tender in 2015.

Eni, meanwhile, received the green light for its 2021 work program at the Miztón and Amoca offshore fields, with a budget of $722.7 million. The program is to include the drilling of five wells at Miztón and one at Amoca, the completion of one well at Miztón and two at Amoca, among other activities “that contribute to accelerating the development of knowledge of the country’s oil potential,” CNH said.

Both fields are part of Area 1 in Mexico’s Campeche bay. In 2019, Eni became the international company to start offshore production in Mexico after the country’s 2013-2014 energy reform, which opened the sector to competition from companies other than Pemex.

Hokchi is a subsidiary of Pan American Energy (PAE), itself a JV between BP plc and Bridas Corp.

Eni México is a subsidiary of Italian major Eni SpA.