Executives at Mexico’s national oil company Petróleos Mexicanos (Pemex) said in an earnings call Monday that work toward improving natural gas use and lowering emissions is starting to pay off. 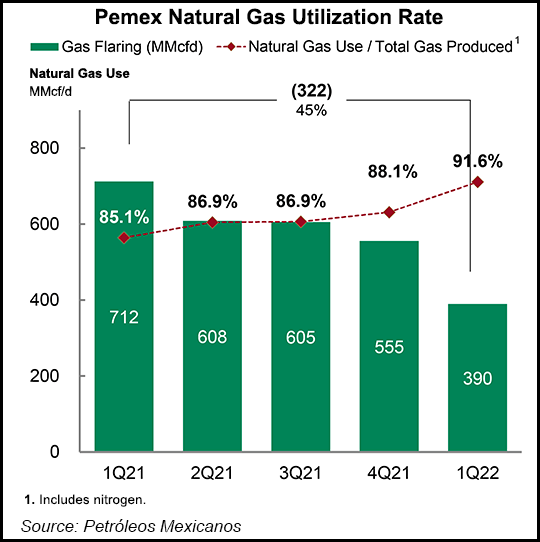 Pemex reported a 42% improvement in natural gas capture in the first quarter. The company was able to use 91.6% of gas produced, flaring off an average of 390 MMcf/d. This is compared to 712 MMcf/d flared in the year-ago quarter.

Executives attributed the gains to “implementing emission reduction activities,” which included the closure of wells, overhaul of compressors and rehabilitation of equipment in its gas processing centers. They said the methane reduction program was showing results less than a year after its implementation.

Natural gas production in the quarter hit 3.821 Bcf/d, up 3.3% year/year. Non-associated gas output rose 5.8% year/year. Natural gas out of Veracruz rose by 51 MMcf/d due to gains at the Ixachi field.

New fields offset steady production decline from the Ku-Maloob-Zaap offshore megafield, Mexico’s main producing asset. Overall, new fields have accounted for 350,000 b/d of production since they started being developed in 2019.

CEO Octavio Romero said that oil and gas production “continues with its upward trend.” He said “this is relevant given higher prices in international markets, which helps the national treasury.”

Mexico’s President Andrés Manuel López Obrador has said the country would look to export more amid high prices, even as the longer term goal is satisfying energy needs with domestic production. During the first quarter, the average price of the Mexican export mix was $88.91/bbl, 57.4% higher than in the first quarter of 2021.

Pemex posted net income of $122 billion pesos ($6 billion), a rare positive result in recent years. This is compared to a loss of 37 billion pesos in the year-ago quarter. The company said that exchange rate gains helped in the result.

Pemex has been allocated 453 billion pesos this year ($22 billion) in its budget, up 15% year/year. As of March 31, 2022, 97.5 billion pesos have been spent, representing 21.5% of the approved budget. The purchase of the Deer Park refinery in Texas and construction of the Dos Bocas refinery account for 45 billion pesos in this total, executives said.

Interim CFO Ántonio López Velarde said the higher oil prices led to “very positive results” which would finance the company’s capital expenditure (capex) and debt program. All capex would be entirely funded by in-house cash flow. He said the government would continue to help the company service its debt either through direct cash infusions or “alternative mechanisms.”

One of these mechanisms is a reduction in the profit-sharing duty, or DUC by its Spanish acronym, which accounts for 80% of the direct fiscal burden. The DUC rate fell from 65% in 2019 to 58% in 2020 and is currently at 52%. That figure is set to fall to 40% this year, executives said.

Mexico is not at present importing any gasoline from Deer Park, the executives said. Its Dos Bocas refinery meanwhile is 88.4% complete as of March. Some 32,000 workers are working on the site with the initial opening slated for July. A testing phase could take up to six months as well as a stabilization phase thereafter, executives said.