Having already downgraded the debt of Mexican state oil company Petróleos Mexicanos (Pemex) to junk status in 2019, Fitch Ratings on Friday lowered the firm’s long-term foreign and local currency issuer default ratings (IDR) another notch to ”BB’ from ”BBB+’ with a negative outlook. 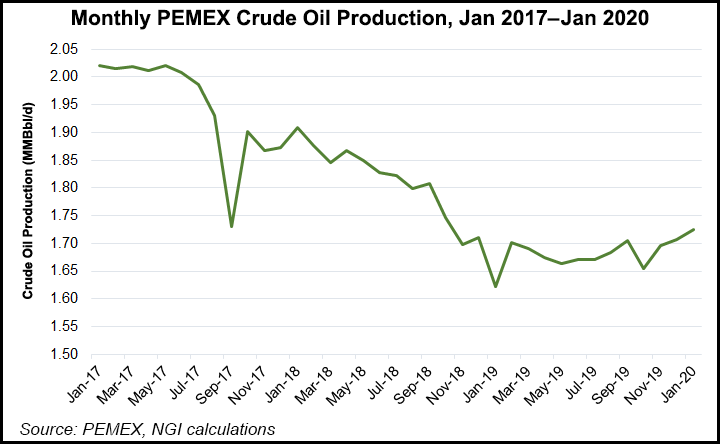 The downgrades, which apply to about $80 billion of notes outstanding, reflect “the downturn in the global oil and gas industry, Fitch’s lower oil price assumptions and the weakening credit linkage between Mexico and Pemex,” said Fitch analysts, who also cited the company’s “limited flexibility to navigate the downturn in the oil and gas industry given its elevated tax burden, high leverage, rising per barrel lifting costs and high investment needs to maintain production and replenish reserves.”

Fitch has also revised its assessment of government support for Pemex to “weak” from “moderate,” citing “the delay and uncertainty of exceptional support from the government towards the company in light of the financial difficulties Pemex will face as a result of the decrease in oil prices.”

Analysts said that additional downgrades could occur “in the absence of proactive and extraordinary government support.”

Fitch estimates that Pemex contributions accounted for about 10% of government revenue or $22 billion in 2019, and that during the past five years, transfers to the government equaled more than 30% of the company’s sales. Government support for Pemex, meanwhile, amounted to $9.5 billion in 2019.

Fitch considers that Mexico’s support for Pemex “has weakened as a result of the delay in implementing extraordinary measures to alleviate the company’s imminent credit quality deterioration resulting from low oil prices.”

The Fitch team said it expects hydrocarbon production and reserves to fall over the medium term “as it will be difficult for Pemex to increase” capital expenditure (capex) in line with its business plan.”

Fitch estimates that Pemex will require annual capex of around $13-$18 billion to replenish reserves based on a finding, development and acquisition (FD&A) cost of $13-$18/boe, and that production could decline 5% annually over the next few years.

In a speech Sunday, Mexico’s president, Andrés Manuel López Obrador, said that Pemex will receive 65 billion pesos, or about $2.64 billion, in new tax breaks this year as part of a larger government response to the economic emergency posed by the coronavirus pandemic.

He said that Pemex will redirect 400,000 b/d to its own local refineries instead of the global market and that construction of the Dos Bocas oil refinery will continue, as will works to rehabilitate Pemex’s six existing refineries. This is despite warnings from analysts of sub-optimal market conditions for investing in the downstream segment, and the multibillion-dollar losses generated by Pemex’s downstream unit in recent years.

In a note to clients on Monday, Bank of America (BofA) analysts called López Obrador’s economic emergency plan “more of the same: social programs, investment in the refinery and other infrastructure projects and more austerity.”

They said the plan puts downside risk to BofA’s current forecast of an 8% contraction for Mexico’s economy in 2020, explaining that López Obrador “did not actually announce a new economic plan and also did not make a strong economic adjustment, which is likely to disappoint business owners who were expecting more decisive support.”

Although analysts have urged Pemex to slash capex and direct funds only to its most profitable fields in 2020 in order to generate positive cash flow, the company has yet to announce any capex cuts.

The president also said Sunday that state power utility Comisión Federal de Electricidad (CFE) has “sufficient financing” to move forward on the construction of previously announced combined-cycle gas turbine plants in the Yucatán and Baja California peninsular regions, as well is in other parts of the country.

He also said that a long-awaited public-private energy infrastructure plan will be announced next week.

“But,” the BofA team said, “the energy program is not new and the announcement has already been postponed for many months.” The analysts said that further rating agency downgrades are likely for Mexico over the coming days and weeks.