While producers in the Permian Basin and Eagle Ford Shale have welcomed the recent completion of pipeline projects on both sides of the U.S.-Mexico border, several projects farther downstream in Mexico, considered crucial to easing a natural gas supply glut in Texas, still face delays. 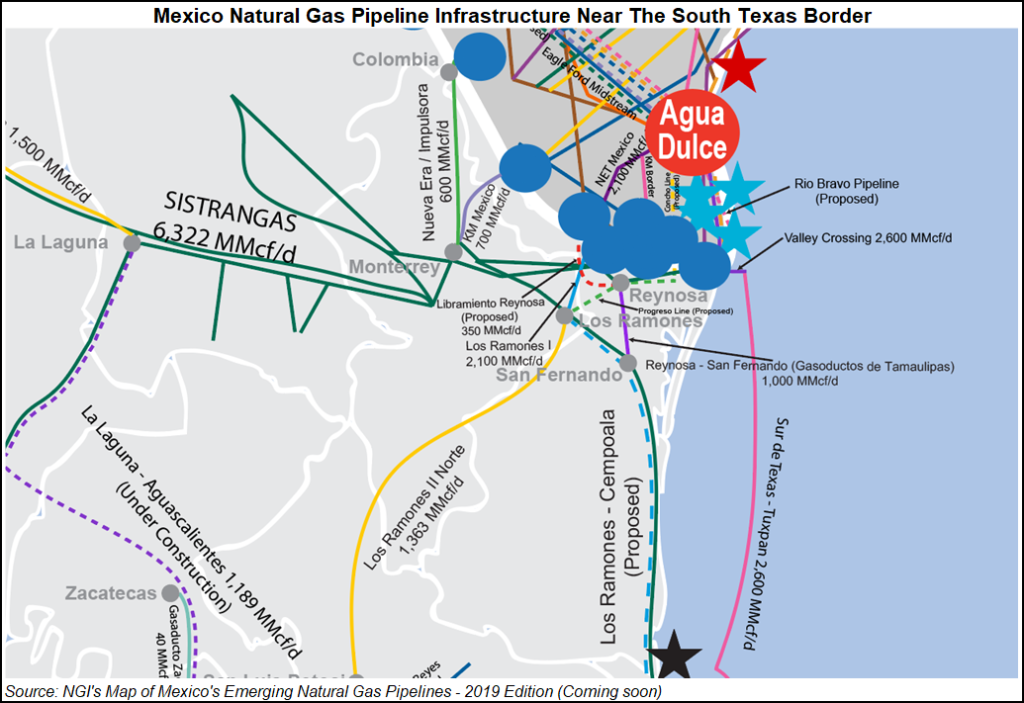 The pending projects are considered especially important to Permian operators, as prices in day-ahead trades dipped into the negatives in recent weeks, a trend that is expected to continue in the near future.

The 168-mile, 2.6 Bcf/d Valley Crossing system extends from the Agua Dulce hub near Corpus Christi, TX, south to the tip of the state in Brownsville, before connecting with the offshore Sur de Texas-Tuxpan pipeline, whose startup is imminent.

Nueva Era, for which Mexican state power utility Comisión Federal de Electricidad (CFE) is the anchor shipper, spans 190 miles from Webb County, in West Texas within the Permian, to the power generation and manufacturing hub of Monterrey, Mexico. The system comprises the 17-mile Impulsora pipeline in Texas and the 171-mile Midstream de Mexico pipe south of the border.

While Nueva Era began operating in June, “flows didn’t didn’t start in earnest until mid-August, and it wasn’t until early November — about a month ago — that volumes really picked up,” RBN Energy LLC analyst Housley Carr said last week.

Peak flows on Nueva Era “have not exceeded 180 MMcf/d, or less than 30% of Nueva Era’s 630 MMcf/d capacity,” Carr said, so “there’s only upside from here.” The pipeline also is to supply gas to a 866 MW combined-cycle gas turbine under construction in Nuevo Leon by Spain’s Iberdrola that is set to come online by the third quarter of 2019.

El Encino-La Laguna, meanwhile, represents a vital stage of Fermaca’s so-called “Wahalajara” system, which when completed would allow Permian gas to be transported from the Waha hub to Guadalajara, Mexico’s second-largest city.

Fermaca’s La Laguna-Aguascalientes and Villa de Reyes-Aguascalientes-Guadalajara pipelines are the final two pending sections of Wahalajara. Genscape Inc. senior natural gas analyst Rick Margolin confirmed this month that Fermaca has pushed back the expected in-service dates for these sections, set for March, to May. The systems should help reduce liquefied natural gas (LNG) imports, he said.

“We expect Wahalajara will flow by pushing out Mexican LNG imports” at the Manzanillo terminal on the Pacific coast, “offsetting Mexican production declines, and serve some moderate demand growth,” Margolin said in a blog post. “Though there will be some pushback on South Texas exports, Wahalajara is expected to ultimately contribute to a net increase in total U.S. pipeline exports to Mexico and Permian exports.”

However, the undersea pipe is only expected to operate at 60% of its 2.6 Bcf/d capacity over the near-term, because of the indefinite suspension of work on sections of TransCanada’s Tuxpan-Tula and Tula-Villa de Reyes pipelines that extend into central Mexico, CFE Energía CEO Guillermo Turrent reportedly told Mexico’s Reforma.

Also facing delays is Carso Energy’s 472 MMcf/d Samalayuca-Sasabe pipeline, which would transport gas from Waha to northwestern Mexico. Carso has pushed back the in-service date to May; it was scheduled to ramp this month.

Genscape expects the Wahalajara and Samalayuca-Sasabe delays to “have a magnified impact on the Permian by delaying more than 1.1 Bcf/d of anticipated debottlenecking relief,” Margolin said.