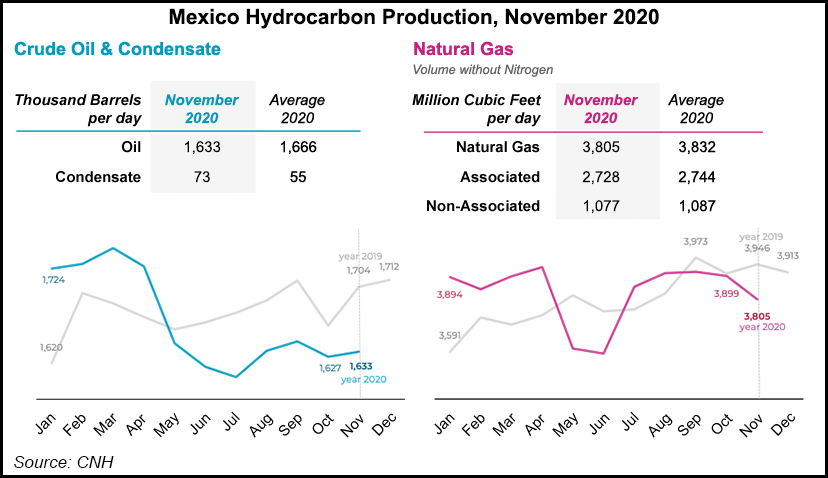 The contract pertains to the Misión block in the Burgos Basin of Northern Mexico. Misión is the leading producer of natural gas among the more than 100 E&P contracts awarded under Mexico’s 2013-2014 market-opening energy reform.

Among hydrocarbon basins in Mexico, Burgos is the leading producer of natural gas not tied to oil production, aka non-associated gas.

In March 2018, Pemex and SMB migrated SMB’s oilfield services (OFS) contract at Misión to a production-sharing contract under the framework of the reform, which was passed by the previous government.

The current administration, however, has suspended further contract migrations, as well as bid rounds and farmout tenders for operating stakes in Pemex acreage.

Mexico’s total natural gas production was 3.8 Bcf/d in November, down from 3.95 Bcf/d in the similar 2019 month, CNH data show.

Amid declining production, Mexico has increasingly relied on pipeline imports from the United States to meet growing domestic demand.

Tuesday also saw the approval by CNH of a $55.25 million work plan submitted by DS Servicios Petroleros, S.A. de C.V., as part of the development plan for the CNH-M4-Ébano/2018 contract.

Like Misión, Ébano was migrated from an OFS contract to an E&P contract, although production has been marginal.

Finally, CNH approved a $4.77 million work plan submitted by a local subsidiary of Total SE for geological studies at shallow water Area 15, which was awarded through the Round 2.1 bidding process in 2017.

The approvals come amid continued uncertainty in Mexico’s private energy sector. President Andrés Manuel López Obrador has pledged to respect the sanctity of E&P contracts awarded under the reform, although the chances of new contracts being awarded during his term appear increasingly slim.

In recent days, he also has indicated he would like to absorb some of the country’s autonomous regulatory agencies into the executive branch. His comments have raised red flags in energy circles, given his history of criticizing CNH and the Comisión Reguladora de Energía, Mexico’s equivalent of the U.S. Federal Energy Regulatory Commission.Despite uncertainty around the government’s policies and the Covid-19 pandemic, Mexico’s main oil and gas trade group Amexhi says that E&P contracts awarded through the reform remain on track to meet their pre-pandemic production targets for 2024.