Mexico’s economy grew 3.6% year-on-year in the third quarter on the back of broad-based growth, including in the industrial sector. The forecast for the year remains steady at 2.1%, according to the Federal Reserve Board of Dallas. 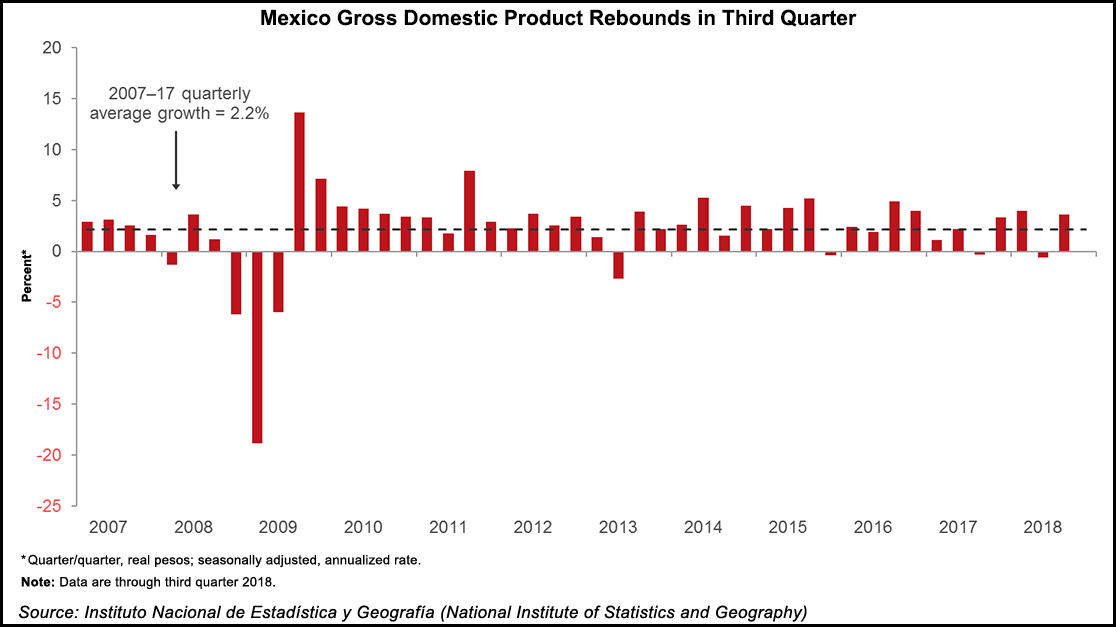 In the first nine months of the year, Mexican oil exports were up nearly 40% from the same period of 2017, mainly because of higher commodity prices.

The positive figures come as welcome news for Mexico, which saw GDP contract by 0.6% in the second quarter, with just under a few weeks to go before socialist and President-Elect AndrÃ©s Manuel LÃ³pez Obrador takes office on Dec. 1.

Late last week, Abel Hibert, an economic adviser to LÃ³pez Obrador, said the incoming president’s recent decision to cancel the partially built Mexico City airport would cost the country 0.7% of GDP. The benchmark stock index subsequently touched a three-year low and left many speculating as to how the new president would handle economic affairs including matters pertaining to energy policy.

On Saturday and Sunday (Nov. 24-25), Mexicans will be asked to vote on whether 10 new policy initiatives should go ahead during the next administration, just as they were asked to do so on the US$13 billion airport in late October.

One of the proposals on the ballot is a US$2.5 billion mid-size refinery set for Dos Bocas, Tabasco, LÃ³pez Obrador’s home state. He has claimed it will be built if he gets the approval by voters to do so.

Building refineries to boost energy self-sufficiency has been part of LÃ³pez Obrador’s energy platform. He has also been critical of Mexico’s energy reform, saying he wants to raise oil production while halting fuel and natural gas imports.

Many analysts, however, suggest that his plans from a practical point of view are unrealistic.

“LÃ³pez Obrador wants to lower natural gas imports, but can he do that?” Tony Payan, director of the Mexico Institute at Rice University, asked the audience at the recent LDC US-Mexico Natural Gas Forum in San Antonio, TX. “No, he can’t, because Mexican manufacturing is competitive because of imports from Texas.”

Similarly, despite calling on a revision of all upstream oil contracts awarded during the current PeÃ±a Nieto administration, the only way Mexico will be able to halt its decade-and-a-half downward trend in production is through private sector participation. LÃ³pez Obrador’s stated goal is to increase domestic crude oil output to 2.4 million b/d in 2024, from the current average of 1.8 million b/d.

“They will not tinker with the energy reform,” Payan said. “But we should expect a system in which Pemex will come to center of the field and the model will be everyone will have to play with Pemex.”

In late October, FitchRatings downgraded the outlook for state-owned Petroleos Mexicanos to negative from stable. Earlier this month, however, credit ratings analysts said they had a positive outlook for Mexico’s gas-dependent electric power sector over the next 10 years.

Regardless of what might change, the economic outlook for Mexico remains solid. Calling Mexico’s economy “resilient,” the International Monetary Fund said growth will hit 2.7% next year. “Growth will benefit from strong economic activity in the United States in both years,” it said in a post on its website in early November.

Although uncertainty remains the name of the game, the economies of the United States and Mexico will remain interwoven. And at the very least, all the recent speculation will cease when LÃ³pez Obrador takes power to serve his sole six-year term.