The Mexican energy reform that opened up the market to private participation remains in place despite President Andrés Manuel López Obrador’s vocal opposition to it, according to experts who spoke Monday at the U.S.-Mexico Natural Gas Forum in San Antonio, TX. 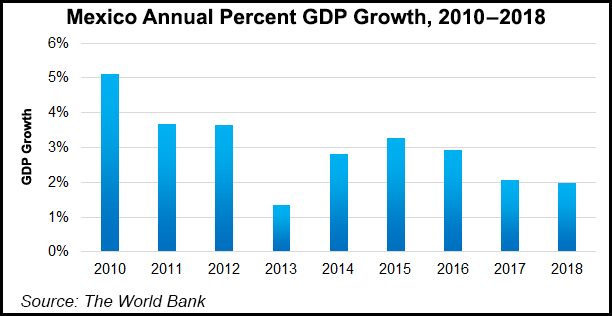 “President López Obrador knows overturning the energy reform would be financial suicide,” said the director of the Wilson Center’s Mexico Institute, Duncan Wood. “At a certain point energy nationalism is going to wear thin. The Mexican economy is doing horribly right now. We are at 0% growth. The most optimistic predictions are 0.4% growth for this year. The U.S. and Mexican economies have become delinked for the first time in decades.”

Even López Obrador’s once-soaring approval rating has dropped from its stratospheric highs, to about 60% today, further squeezing the room of the president to tinker with the reform. Moreover, López Obrador is adamant on ratifying the proposed revision to the North American Free Trade Agreement, i.e. the U.S.-Mexico-Canada-Agreement (USMCA), in which the energy reform is a pillar.

Although the administration might still try to “reverse the reform in practice,” it will not be able to follow through, said Tony Payan, director of the Mexico Center at Rice University’s Baker Institute for Public Policy, especially as it pertains to the burden being placed on state oil company Petróleos Mexicanos (Pemex).

“There is no way, structurally speaking, that the government will have the resources to reverse the decline in oil production,” Payan said. “There is no way. But by the end of 2020, we will see a Pemex saddled with debt. Pemex is unsalvageable. And then Mexico will start implementing the energy reform, and it will be there, because it is baked into the USMCA.”

For Wood, the most worrying change in the first year of the López Obrador administration has been seen in the energy sector regulators including the Comisión Reguladora de Energía (CRE), and the Comisión Nacional de Hidrocarburos (CNH), where budgets have been slashed and new political appointees ushered in.

“The playing field is no longer level; it is now decidedly slanted in favor of whoever is in the government’s good books,” Wood said. “Just recently one of the new commissioners at the CRE said the CRE would not issue permits for private gas stations because Pemex would want its own gas stations with the construction of the new refinery.”

Wood added, however, that as a result of preference being given to Pemex, short-term production gains could be had. “The drillbits are going into the ground quicker thanks to government facilitation. So, in the short-term Pemex is probably going to have some success because the company is going back to some of the abandoned oilfields using enhanced oilfield recovery to get out those resources, which could mean an extra 100,000 b/d in the next couple of years. From a political point of view, it will look good. But they are going to be very expensive barrels.”

Payan argued that personnel changes at Pemex will also make increased production difficult. “I think Pemex is hemorrhaging talent and skill. It’s being populated by individuals that have a steep learning curve. Many of these talented people are now ending up in [other energy companies in] Houston. Pemex is making lots of mistakes. All this is setting up the landscape for future opportunities for the private sector in Mexico. In a couple of years reality is going to hit, and they are going to start changing their tune.”

Wood said, “The president as a politician is brilliant. He understands how to get the results on politics. On the economy and energy sector it is something else entirely, though.”