Mexico’s Energy Ministry Sener has announced it will appeal the decision by a district judge that pauses a proposed change to the rules of the game in Mexico’s natural gas market. 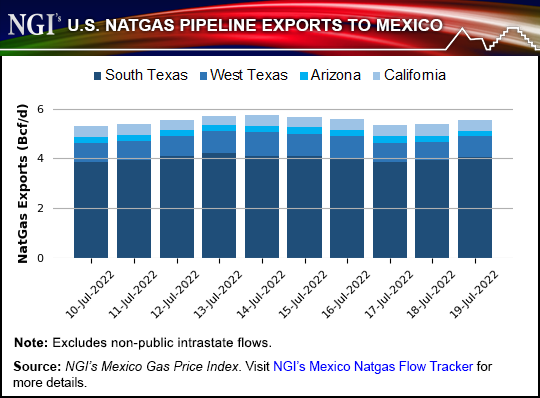 The changes pushed by Sener would mean that all users of the natural gas pipeline network Sistrangas would have to use imported gas sourced either by Mexican state giants Petróleos Mexicanos (Pemex) or Comisión Federal de Electricidad (CFE).

District Judge Juan Pablo Gómez Fierro ruled in favor of the definitive suspension of the policy. The judge is specialized in matters of competition.

Sener responded by saying that “the control and planning of hydrocarbons are part of the exclusive powers of the federal government.” The criteria issued by Sener for natural gas transport is part of the nation’s energy policy, which is “coordinated together with the different agencies of the sector,” Sener said.

The ministry plans to file a motion for review and will appeal the resolution, calling the injunction “illegal.”

In a recent column for NGI’s Mexico GPI, Gadex consultant Eduardo Prud’homme said the Constitution and the hydrocarbons law back the judicial decision. He said the content of articles 25, 27 and 28 of the Constitution was “very clear in pointing out that monopolies are prohibited in Mexico, except in some strategic areas reserved for the public sector.

“The Constitution fully identifies what they are and, with regard to the scope of the CFE, only in the transmission and distribution of electricity does it enjoy exclusivity. The rest of the activities in the value chains of the energy sector can be carried out by the private sector, and they must be performed under competitive conditions.”

Former Comisión Reguladora de Energía (CRE) Commissioner Francisco Barnés told NGI’s Mexico GPI that “the government is taking an incorrect measure that will slow down the use of natural gas in the country.” He called the proposed rule change “a serious strategic error.”

The legal action is one in a series of legal complaints filed against the Mexican government during the term of President Andrés Manuel López Obradror.

The president has sought to favor state firms in the energy sector. He has also tried to undo many of the changes that came about during the country’s energy reform of 2013 and 2014. Courts have generally taken the side of the private sector companies.

Last year, Judge Gómez Fierro ruled against a decree that would have removed the obligation for CFE to purchase power via competitive auctions. The same judge also suspended an amendment to the hydrocarbons law. In another blow to the president’s plans, a proposed constitutional overhaul of Mexico’s electric power sector failed to garner the supermajority of votes needed to pass the lower house in an April vote.

But earlier this year, Mexico’s Supreme Court ruled that key components of legislation passed in 2021 to overhaul the country’s electric industry law do not violate the constitution. The decision now faces other challenges in lower courts.

U.S. officials, including Ambassador to Mexico Ken Salazar, Special Presidential Envoy for Climate John Kerry and U.S. Trade Representative Katherine Tai have expressed concern about change’s to Mexico’s energy laws, and the impacts they might have on the United States-Mexico-Canada-Agreement, or USMCA.