Mexico’s Energy Minister Rocío Nahle said on Wednesday refineries and petrochemicals were a focus of energy as the country prepares to announce a multi-billion-dollar energy infrastructure plan. 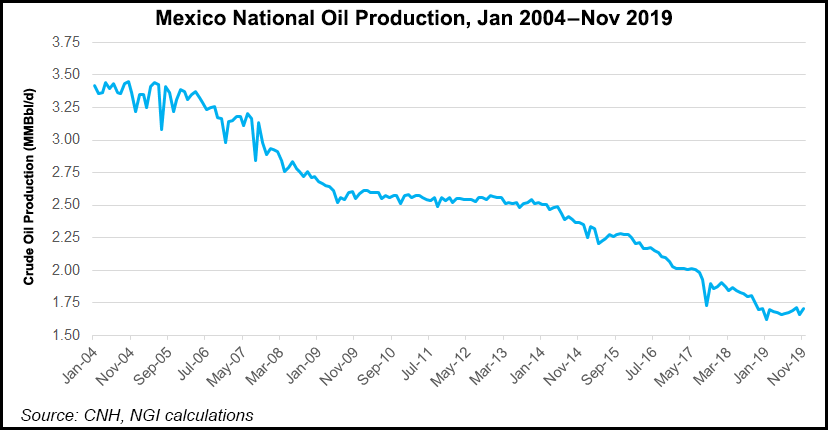 “The president brought us together and asked us for a list of everything we need in the country for energy,” Nahle told Mexico’s radio station Radio Formula. “We are going well, are very advanced and now the president is going to go through our list.”

Nahle, who said that the country would recuperate its refining capabilities during this administration, said there would be room for the private sector to invest in Mexico’s oil and gas sector in the plan.

President Andrés Manuel López Obrador said Thursday the package would be announced in the next 10 days after consultation with some energy sector players, including state oil firm Petroleos Mexicanos (Pemex), state utility Comision Federal de Electricidad (CFE), the president’s chief of staff Alfonso Romo and Nahle. The package is reportedly worth $92 billion in projects.

Nahle also reiterated that there would be no more oil and gas rounds or farmouts “for the moment” in Mexico, but that in the upstream segment, oilfield service contracts would continue to provide opportunities for private firms.

By far the biggest energy infrastructure project in Mexico is the 340,000 b/d Dos Bocas refinery underway in the president’s home state of Tabasco. Nahle said the project remains on track.

In February, she took a team of engineers to India to visit the Jamnagar refinery to develop knowhow for Dos Bocas. She said since the trip, she’s certain that the refinery will be built on time and hit the $8 billion budget.

“They also did their refinery in the same timeframe as we are doing,” she said.

Some analysts have criticized the Dos Bocas refinery, which accounts for about 13% of projected Pemex capital expenditure from 2019-2023, as being wasteful and a job creation program for the president. It also is said to take money away from Pemex efforts to halt years of declining oil and gas production.

“Most analysts expect the project to cost around $12-15 billion, compared to the authorities’ $8 billion estimate, and completion to take longer than the current target of mid-2022,” the International Monetary Fund said in a report late last year.

The energy minister said refurbishing of the nation’s six other refineries, where utilization rates fell below 40% in 2019, is a priority, not only as a way to attain the president’s goal of achieving energy sovereignty but also because “it’s a really good business.

“We are currently importing 70% of our gasoline,” Nahle said. “That’s why we need to get our refineries going. Our refineries were in bad shape when this government came in. We are now fixing them. And with Dos Bocas, we will get close to self-sufficiency.”

In addition, petrochemical complexes needed to be developed in Mexico especially during a time of low oil prices, to “add value” to Mexico’s oil and gas production.

As an example, Nahle mentioned the Pajaritos fertilizer plant in Veracruz, which Pemex bought in what was considered a controversial purchase even though it was out of service. The plant began operating last month using feed gas from the Sur de Texas-Tuxpan marine pipeline.

“It’s a responsibility that we’ve assumed,” Nahle said. “In five years, we want to leave something stable for the country and all Mexicans.”