Mexico plans to offer 30 blocks for deepwater exploration in the fourth auction of the Round 2 series in what one analyst said was “an all-out effort” by the nation’s energy authorities to follow up on recent upstream auction successes as part of the 2013 energy reform. 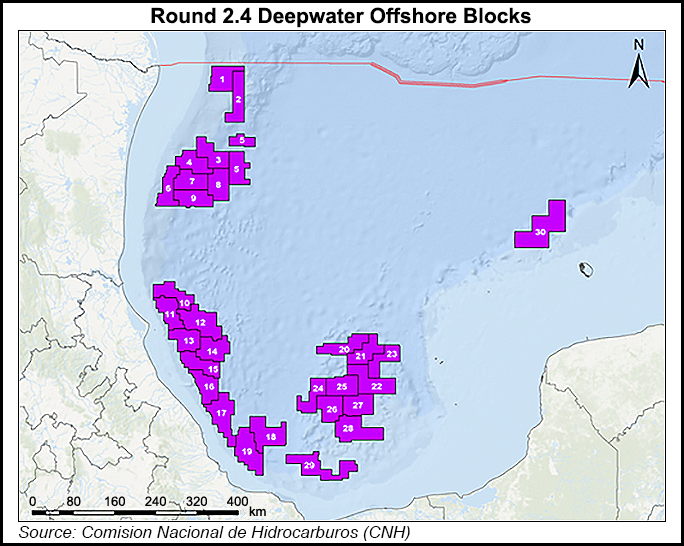 Several of the blocks on offer in Round 2.4 scheduled Jan. 31 would include natural gas-heavy areas, Mexico’s Energy Secretary Pedro Joaquin Caldwell said Wednesday. Using what appeared to be a back-of-an-envelope calculation, Mexican authorities said the auction could raise about $31 billion.

The auction is scheduled a month later than earlier planned. However, industry insiders said the rescheduling was not a sign of trouble.

“The delay was a very positive sign,” said Arturo Carranza, an energy consultant for Mexico’s National Institute for Public Administration. “As information emerged on the blocks on offer, the authorities realized that it was much more positive than they had originally envisaged, and they needed to adjust the terms of the auction accordingly.”

Already, the mood of the ministry and the National Hydrocarbons Commission, or CNH, has been buoyed by the Zama 1 find in shallow waters of the southern end of the Gulf of Mexico (GOM). The discovery by Houston-based Talos Talos Energy LLC and its partners may hold potential reserves of 1.5-2 billion boe.

Round 2.4 will be the second deepwater auction. The 30 blocks on offer are estimated to have potential reserves of 4.2 billion boe within 76,000 square kilometers.

Mexican officials have said they plan to have one more auction as part of Round 2, which will feature blocks with “nonconventional sources,” including shale, but no date has been set.

The areas covered in Round 2.4 include the Perdido Fold Belt, near the U.S.-Mexico maritime border; the pre-salt Salina Basin further south in the GOM; and Cordilleras off the coast of Veracruz. Cordilleras is a natural gas discovery by Mexico’s state-owned operator Petroleos Mexicanos (Pemex), while another field, Lakach, was discovered in 2008 but saw development halted for budgetary reasons ahead of the energy reform.

Also included in 2.4 is an offshore block on the Yucatan Platform, never previously mentioned as a major prospect. Mexico’s Deputy Secretary of Energy for Hydrocarbons Aldo Flores said at Wednesday’s presentation that the Yucatan Platform might be regarded as a dark horse, but extensive seismic studies point to potential reserves. Pemex in the early 1970s drilled 10 exploratory wells into the platform in a quest for potential oil reserves.

Stay up to date with NGI as our Thought Leaders analyze and report on Mexico’s deregulating natural gas market in our new NGI’s Mexico Gas Price Indexnewsletter, which includes news, prices and relevant market data.