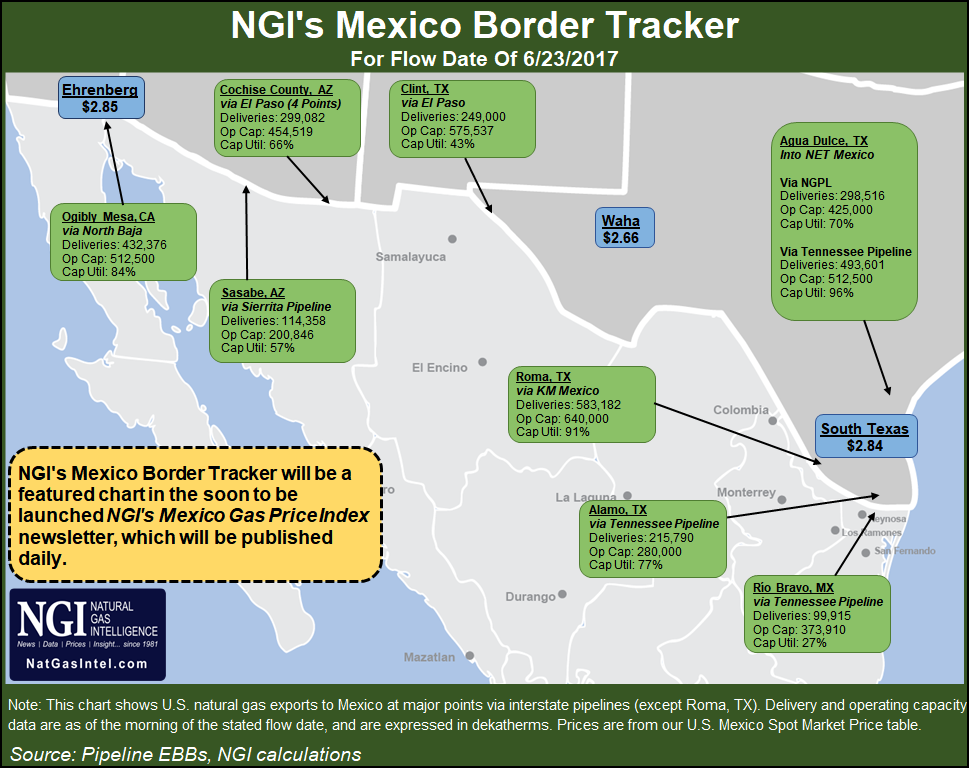 The type of daily gas sales the system records won’t begin for another week, July 1 at the earliest, when Mexico’s new capacity reservation market model enters into force. However, the regulator’s digital reporting platform went live at the beginning of the year, and local marketers have been familiarizing themselves with the system and its mandatory reporting requirements.

“Some marketers have told us that they see some possible areas for improvement in how the information is reported,” CRE’s Meney de la Peza, head of the natural gas unit, told NGI. “What they are most concerned about are certain variables being requested that they see as very burdensome to report. In some cases we think that they are correct,” in which case the rules would be modified.

A draft of the updated reporting requirements is to be made public in the coming weeks, according to de la Peza.

“Our main concern is that the information be useful for participants, that it reflect market conditions, and that it not create any additional regulatory burdens for the companies,” she said.

Check back with NGI as our Thought Leaders analyze and report on Mexico’s deregulating natural gas market in a soon to be published daily newsletter — NGI’s Mexico Gas Price Index, which will include news, prices and relevant market data.

The daily reporting system is designed to capture data on day-ahead spot sales in the gas market. For each transaction of this type, marketers must report the volume, price per molecule, storage and transportation costs, and several other variables, according to the requirements, which CRE issued in December. After 6 p.m. Zona Centro (Central Time), the regulator would compile the information submitted for the day and publish it in a report that would appear on its website the following day. In addition to the daily information, marketers must submit a monthly report on their sales.

The Mexican government is keen to ensure participants have access to transparent data on prices and other market conditions. Officials view the information, which is obtained through the transaction reporting system and an electronic bulletin board that tracks capacity and flows in the national pipeline system, as fundamental to developing an open and competitive gas market, following decades of dominance by the state oil company, Petroleos Mexicanos (Pemex).

CRE would post the first daily transaction report as soon as marketers begin registering spot sales. In theory, these transactions could occur by July 1, but it may take longer depending on how the market evolves.

“What some marketers and buyers have told us, for example, is that they are going to sign a contract with Pemex to deliver a base quantity of gas for the entire month,” de la Peza said. “But they are also going to want to cover their demand peaks with spot purchases from another marketer.”

The daily report published on CRE’s website is to include averages of the prices and volumes moved each day, with sensitive information withheld that could identify marketers or be harmful to competition. Initially, the report would provide an average price for all transactions across the entire country.

“As soon as there is a higher volume of information being sent to CRE and we are able to identify distinct trends in different regions, we will start publishing price data by region,” de la Peza said. “We don’t want to determine the regions ex ante, but rather rely on the information that is reported to help us identify which ones are most relevant.”

CRE expects third parties to eventually use data gleaned from the daily transaction reports to calculate local price indexes and evaluate market conditions at specific hubs or regions in the Mexican gas market. But as regulators and industry players each noted, it is going to take time for the market to begin generating the liquidity necessary for robust price indexes.

“The Mexican market today is still not yet sufficiently dynamic, and there aren’t yet any large volumes of spot sales,” IEnova’s Tania Ortiz Mena told NGI. She is executive vice president of development for the Mexican subsidiary of Sempra Energy. “The majority of current transactions are long-term, for one or two years.”

The Mexican Energy Secretariat (Sener) has identified four possible hubs on the existing network that could be used to create indexes: Los Ramones, on the state border of Nuevo Leon and Tamaulipas; Encino in the state of Chihuahua; the Bajio region north of Mexico City; and Cactus, in the state of Chiapas. A series of new pipeline projects, including the $2.1 billion undersea Sur de Texas-Tuxpan pipeline scheduled to come online in 2018, should also create new arbitration points for the market in the coming years.

“The most liquid hubs will, by necessity, be at the convergence of various pipelines that transport gas from different sources,” Ortiz Mena said. “One of these places that, to me, would perhaps seem to stand out is Ojinaga-Encino…But it’s still very early.”

“I think that Mexico has to concentrate more on creating the conditions to create a more liquid and dynamic market, and not be thinking about a Mexico index,” she added. “That will come as a consequence.”

Gas prices in northern and central Mexico, where there are various import points along the border with the United States, should continue to be indexed to international prices, Ortiz Mena said. In the south, by contrast, Pemex is the sole supplier of gas, mostly from its domestic fields.

In mid-June,CRE eliminated the regulated price cap on Pemex’s first-hand gas sales, or VPM, throughout Mexico, a decision it said would allow agents other than the national oil company to provide supply options. At least nine companies have licenses to produce gas in southern Mexico. CRE also expects that the deregulated prices, now determined by the forces of supply and demand, may help Pemex revitalize its southern gas fields, whose output has declined in recent years.

“We believe that a liberalized price will allow Pemex to get started on several projects to increase production in the south, and not necessarily through investments that are very costly or long term,” CRE’s de la Peza said. “Specifically, Pemex has plans to reduce gas venting and reduce the nitrogen content of its gas.”