The Mexican energy regulator plans to publish prices for six natural gas trading regions, with the first report due later this month. 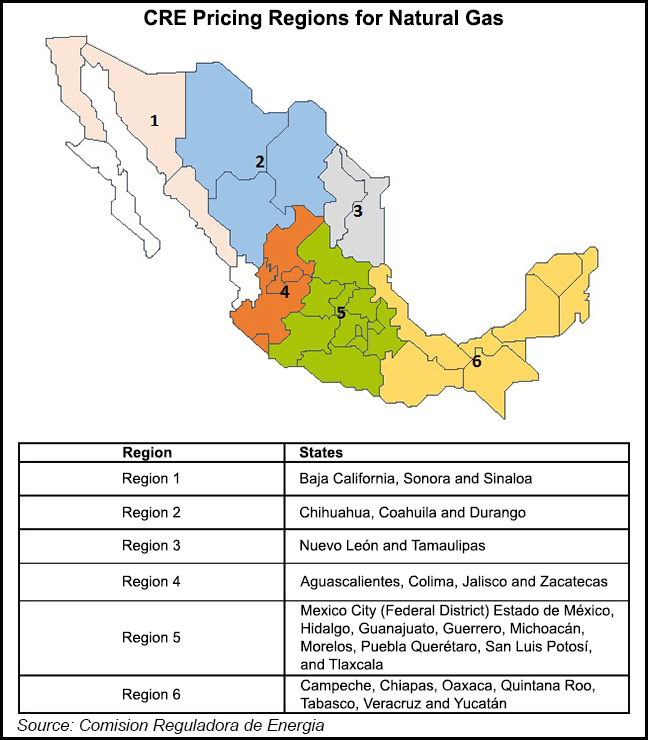 The Comision Reguladora de Energia (CRE) last week published a regulatory accord identifying the six regions, which encompass the Federal District and all but two of Mexico’s 31 states. Initially, the regulator plans to release a monthly index showing an average price of all trades billed in each region during the prior month.

The CRE started publishing a national version of this index, known as the IPGN, last August. The index is calculated using data captured in the post-transaction reports that natural gas marketers operating in Mexico are required to file each month.

When the IPGN initially was published last summer, CRE said it would begin releasing regional prices once it had collected enough transactional data to identify specific trading areas and liquidity points within the Mexican gas market.

“Generating regional price indexes will provide an analytical tool for the commission to identify potential entry barriers and, in general, adverse conditions for creating competition in the natural gas market,” according to the regulator.

Regions 1-3 cover the northern states of Mexico, while regions 4-6 encompass the central-southern states. The index regions exclude the west coast states of Nayarit and Baja California Sur, where there is no known gas marketing activity, according to the CRE.

The northeast region 2 includes the industrialized state of Nuevo Leon, whose capital city, Monterrey, is expected to be the site of Mexico’s first gas trading hub. The central region 5 encompasses some of the most densely populated areas, including Mexico City.

According to the accord, the design of the six regions takes into account:

The regions also consider the tariff zones and flows on the Sistrangas, Mexico’s largest gas pipeline network. Several areas somewhat overlap with the six tariff zones on the national system, while others appear to correlate with privately owned pipelines outside of Sistrangas.

A proposed redesign of Sistrangas tariff regime would expand the number of zones on that system to nine later this year.

The CRE indexes, also known as price reports, are intended to be indicative and temporary. CRE officials have said they expect to cease publication once the market is able to develop indexes.

“The CRE price report is exactly what it says it is: an indication of where gas is pricing in Mexico,” Tenaska Marketing Ventures Inc.’s Geoff Street, director of marketing, told NGI’s Mexico GPI. “It is not a reference index to be used on a transaction.”

Most, if not all, transactions in Mexican gas market are priced to U.S. indexes plus transport costs, according to Street.

“Until such time as there are fixed price transactions occurring in Mexico on a regular basis and buyers and sellers decide they want to reduce their risk of buying the high or selling the low, it seems unlikely that gas will trade commercially at any index other than those currently utilized in the United States,” he said.

Per the CRE accord, the publication of regional indexes is also intended to help gas buyers make “informed decisions” and to send market signals that help promote investment in pipeline infrastructure and boost competition among marketers.

“For a person not involved in the market or who doesn’t have access to the U.S. index information, the report might be useful in estimating what they’re paying for gas,” Street said.

“Ultimately, the Mexican market has a long way to go before specifically Mexican indices are needed commercially. I think everyone involved hopes it doesn’t take a long time to get there.”

Apart from the IPGN reports, the CRE also intends to create a set of forward-looking price indexes, using data culled from the daily trading reports that marketers are also required to file. Updated daily reporting requirements are set to kick in later this month.

Once the number of reported daily deals increases, the CRE plans to release a daily index that would show the average price of all trades scheduled for next-day flow, as well as a monthly index of trades with flow dates on the following month.

The new indexes would eventually be broken down by region. To do so, the CRE could — and expects to — use the same regions it outlined, but it is also able to redesign them at any time, according to a source at the regulator.