The Mexican energy regulator has issued a draft regulation with proposed changes to its reporting system for natural gas marketers, as well as the methodologies for several new price indexes. 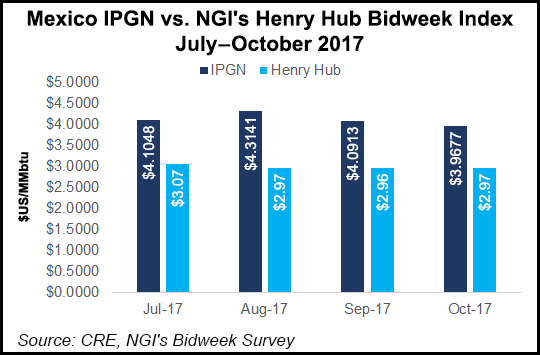 The Comision Reguladora de Energia (CRE) currently publishes a national monthly price index known as the IPGN, based on data captured in the monthly post-transaction reports that Mexican gas marketers are required to file. Marketers must also submit daily reports on trading activity when it occurs.

Earlier this year, the CRE said it would modify the daily reporting rules, releasing a draft resolution on Nov. 8 for public comment. The comment period usually takes up to two months, and CRE may modify the draft before its final approval.

“The goal with these proposed changes is to simplify how natural gas marketers report the trades they schedule each day, and to publicize how the CRE will use that information,” a spokesperson for the regulator told NGI.

The draft includes the methodologies for calculating a new set of forward-looking price indexes that would be based on the daily reports. Like with the IPGN, CRE expects initially to release the indexes as national aggregates and eventually publish regional indexes once liquid trading points emerge in Mexico’s still incipient natural gas market.

According to the draft, CRE would use the data to generate a daily index as well as a new monthly index. The daily index would show an average price of all trades scheduled for next-day flow. The new monthly index, in turn, would be based on trades with flow dates during the next month. It would not supplant the also-monthly IPGN, given that each index uses different data.

The IPGN “is calculated by taking an average volume and price for transactions that natural gas marketers have billed during the previous month,” the CRE spokesperson said. “It is not based on trades for flow on a later date, as would be the case with these new rules.”

The new monthly index is somewhat similar to a bidweek index in the U.S. gas market, but only in the sense that it captures data on trades for flow next month, according to CRE. It would not be limited to trades occurring during the final week of each month.

However, “once we have more data on the market’s behavior and as it starts to mature, the CRE will evaluate whether it could create an index that provides the Mexican market with similar information as bidweek indexes do in the United States,” the spokesperson said.

The proposed regulations also leave open the possibility that CRE could publish indexes with a different periodicity — for example, weekly or biweekly — although the draft does not include the methodology for calculating any of these. The regulator has said it plans to cease publishing its indexes once private market participants develop their own.

According to the draft, CRE would publish the proposed daily indexes, with data from the previous day’s trades, after the start of each flow day, which runs from 9 a.m. to 8:59 a.m. Central Mexico time. The new monthly indexes would be released after 9 a.m. on the first business day of each month.

The CRE spokesperson said the regulator would begin issuing a national monthly index as soon as the new rules take effect, while the publication of daily and regional prices would depend on market conditions. Currently, most gas trades in Mexico are scheduled on a monthly basis.

To simplify the daily price reports, the draft resolution would also eliminate several variables that marketers must currently provide to the CRE, including marketing margins and the storage, distribution and transportation costs for each trade.

Under the new rules, marketers would only have to report a final transaction price, consisting of the price per molecule plus delivery costs, along with a handful of other variables, including volume, type of buyer, start and end flow dates, delivery point and transaction type (sale or purchase). In addition, companies would report prices in the currency used for each trade, ending the current rule that prices be submitted in pesos/gigajoules (GJ).

Separately, the CRE released on Nov. 6 a draft resolution that would extend the deadline for the monthly reports used to generate the IPGN, from the 10th business day after the close of each month to the 16th calendar day. The new change was proposed at the request of marketers, which told the regulator that they needed more time to bill some of their trades.

The IPGN was first published in August, based on transaction data for July. The most recent index, for October, reported an average price of 70.42 pesos/GJ ($3.97/MMBtu).