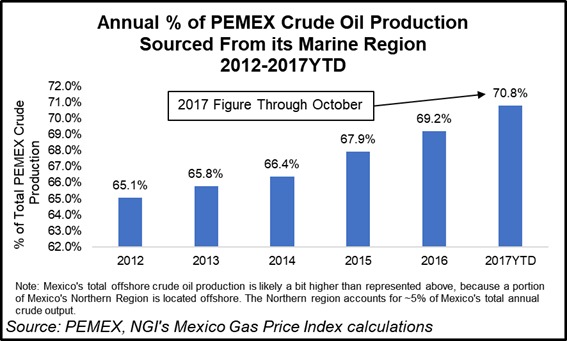 The agreement, which took effect this month, establishes coordination, collaboration and information exchange mechanisms for the Comision Nacional de Hidrocarburos (CNH) and the Secretaria de Marina (Semar). The goal is to improve the safety and security conditions for offshore E&Ps, as well as to boost CNH’s regulatory oversight capabilities.

“The two entities will conduct joint actions using technological tools that will allow CNH to monitor oil and natural gas activity,” according to government officials. “This will also help the regulator to detect unauthorized activity.”

The collaboration agreement centers on the use of satellites to oversee offshore drilling and exploration.

CNH plans to implement a Center for Satellite Monitoring and Oversight of Petroleum Activities. Technical teams at the center would analyze satellite images to check for deviations from the exploration, development and production programs, as well as activities authorized by the upstream regulator.

In recent years, the oil and gas industry has deployed unmanned aerial systems (UAS), or drones, to inspect offshore infrastructure, among other uses.

In Mexico, one potential UAS application is in the midstream business, where oil and gas pipelines are often targeted for theft. This month, Canadian drone developer SkyX Systems Corp. reported that it had flown an autonomous data mission over 100 kilometers of gas pipeline in Mexico for an unnamed client.

A spokesperson for CNH told NGI that the monitoring agreement with Semar was open to the use of other technologies, although at the moment there were no specific plans involving drones.

The regulator oversees 130,346 square kilometers (50,327 square miles) of offshore and onshore E&P blocks, according to officials. Of the total area, nearly 80% corresponds to the 462 blocks assigned to Pemex after the energy reforms began in 2013. The remaining acreage, about 27,700 square kilometers, is from the E&P contracts awarded in Mexico’s first two rounds of licensing auctions.

To date, most E&P activity in Mexico is offshore. In October, the country produced 1.9 million b/d of oil, 82% from offshore areas, according to CNH data. Associated natural gas from offshore wells contributed about half of the 4.79 Bcf/d (including nitrogen content) produced over the same month.

Of the seven licensing tenders held so far, four have been for offshore blocks in shallow and deepwater areas. The government has scheduled a second deepwater auction for Jan. 31, to be held in conjunction with the farmout of Pemex’s Nobilis-Maximino project in the Gulf of Mexico’s Perdido Fold Belt. A new shallow water auction — Mexico’s fourth — is scheduled for April.

Pemex remains the principal operator in Mexico as well. The state company accounted for 87% of the 73 wells drilled between August 2014, when the country’s new hydrocarbons law took effect, and September 2017, according a report presented to CNH commissioners in early November.