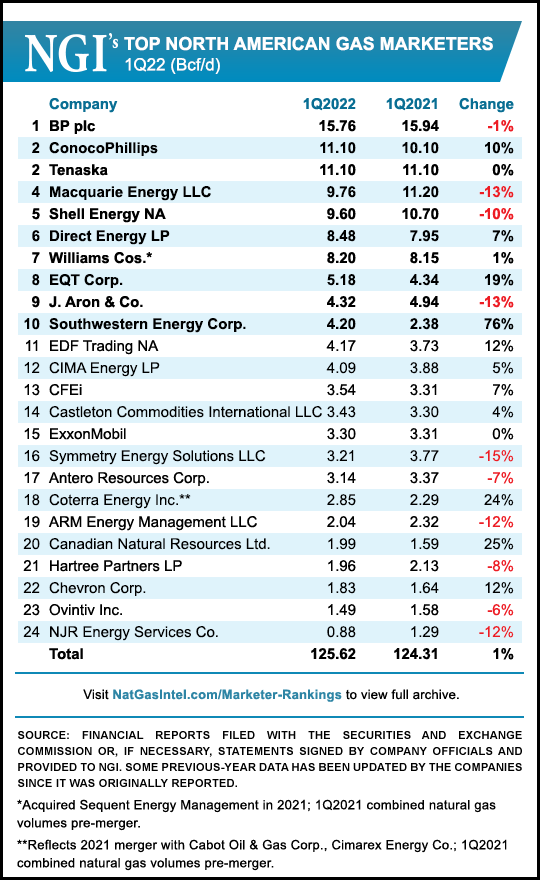 CFEi, a fuel procurement and marketing arm of state-owned power utility Comisión Federal de Electricidad (CFE), transacted 3.54 Bcf/d of gas in the first quarter, up from 3.31 Bcf/d in the same quarter last year. That made it the continent’s 13th largest marketer by volume, according to the survey.

CFE has sought to continue expanding its natural gas import capacity from the United States in order to supply its gas-fired power plants and grow its domestic gas marketing business through subsidiary CFEnergía.

A proposed amendment to the terms and conditions on the Sistrangas pipeline network could also mean a much larger role for CFE in the gas market.

U.S.-to-Mexico exports of natural gas by pipeline averaged 5.9 Bcf/d in 2021, up from 5.45 Bcf/d in 2020, according to the U.S. Energy Information Administration (EIA). Pipeline flows to Mexico (excluding non-public intrastate flows) have hovered around 6 Bcf/d this month, according to NGI data.

Sales Up Across North America

Indeed, after peaking in the winter, production during the spring months proved choppy amid annual spring maintenance projects. Output has wavered between 92 Bcf and 96 Bcf much of the season. While EIA expects U.S. dry natural gas production to rise from an average of 95.7 Bcf/d this month to 97.9 Bcf/d for the second half of 2022, market participants said the increase is paramount to ensure a balanced market ahead of next winter.