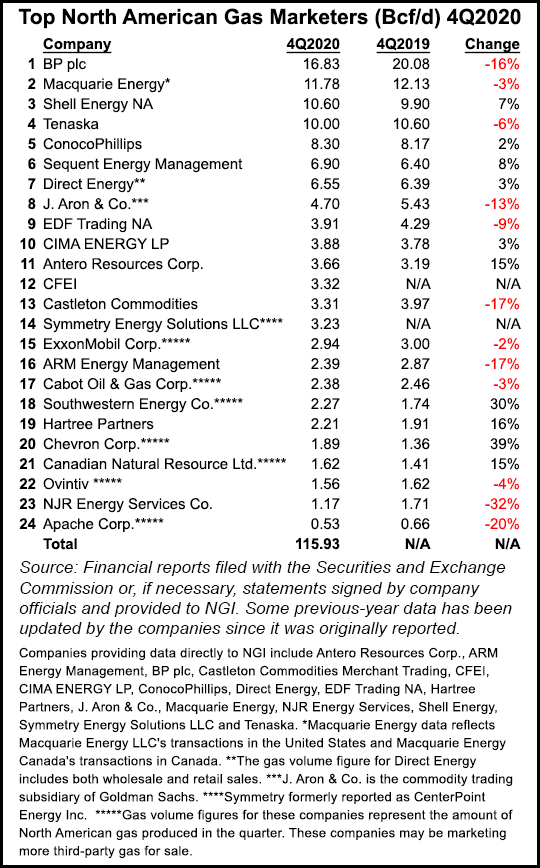 Through CFEi and its domestic counterpart CFEnergía, CFE has supplanted state oil company Petróleos Mexicanos (Pemex) in recent years as the dominant player in the country’s natural gas market.

Amid declining gas production by Pemex, CFE has anchored a massive buildout of natural gas pipelines to import the molecule from the United States.

The rankings follow the fourth survey of natural gas sellers and buyers in Mexico conducted by NGI’s Mexico GPI. Respondents to the Mexico survey said that 64% of the gas they buy and sell in Mexico is either done as a difference to a daily or monthly U.S. index, or is negotiated as a bidweek basis differential to the Henry Hub. That’s up from the 40-47% range from the first three surveys held over the past two years.

The Agua Dulce hub in South Texas, which was recently added to NGI’s Forward Look, has emerged as “easily the largest natural gas supply area for Mexico and home to the most impressive infrastructure dedicated to Mexico,” according to Gadex consultancy founder Eduardo Prud’homme.

The 24 gas marketers included in the latest survey reported combined sales transactions of 115.93 Bcf/d for 4Q2020.

The 22 gas marketers covered in the survey for which year-earlier data were available reported total sales transactions of 109.38 Bcf/d for the latest quarter, down from 113.07 for 4Q2019.

A number of the largest gas marketers led the downward trend as production declined in response to the demand destruction caused by the coronavirus pandemic, hampering marketer activity in the latest quarter as it did throughout much of 2020.

Fourth quarter dry gas production fell 5.7% year/year, U.S. Energy Information Administration (EIA) data show. That followed a year/year falloff of 4.4% in the prior quarter. Production was tied to the steep drop-off in the U.S. rig count, which peaked at 793 on March 6, just prior to the pandemic’s onset last year, but dropped to a low of 244 by Aug. 14. Rig counts have since recovered ground to above 400.

“There is always a several month lag between rig counts and production, so it’s certainly no surprise production levels continued to fall last year, even with a rebound in drilling activity later in the year,” said NGI’s Patrick Rau, director of Strategy & Research.

On the demand side, the U.S. winter got off to a slow start as average temperatures across the country during 4Q2020 were 3.6% warmer than normal, according to National Oceanic and Atmospheric Administration data. Robust feed gas deliveries into U.S. liquefaction plants helped offset lighter domestic demand. Overall, however, total U.S. gas consumption was down 4.1% year/year this past October through December.

In the latest survey, half of the top 10 marketers and a dozen companies overall reported lower numbers in 4Q2020 than in the year-earlier period.

“The combination of vaccine rollouts and more markets gradually opening up signaled that it was time to get prepared to meet some pent-up demand, as we come out” of the pandemic, trader Mike Matousek of U.S. Global Investors Inc., told NGI.

EIA expects production to average 91.5 Bcf/d for 2021, on par with 2020. Federal researchers noted, however, that monthly average production in 2020 hit record levels in 1Q2020, before plummeting in April after virus outbreaks, skewing the year/year comparison. Production is not expected to return to 2019 levels before 2023.

Associated gas production is also expected to slowly increase this year alongside a recovery in oil production. Oil output in the United States started to pick up in November and, while choppy, has continued to advance over several weeks to date this year.

Demand, of course, would need to keep pace.

Harsh blasts of winter this year — both domestically and in key export destination Asia — have already bolstered natural gas demand early in 2021.

“Demand has proven to be quite robust so far this year, thanks to the combination of extreme cold temperatures in Asia, and our own bout with freezing temps in February,” Rau said, referring to the Arctic freeze that gripped much of the Lower 48. Stronger economic activity and demand beyond that created by weather, however, will be needed to drive marketer volumes notably higher this year, he said.

That noted, beginning with 2Q2021 results, year/year gas marketer results could start to improve, reflecting a post-pandemic recovery. Still, it could take several quarters — or even years — to surpass marketer volumes prior to the pandemic.

“And any 2021 outlook should be viewed with a lot of caution,” Matousek said. “How do we know the vaccines will end this thing? Or at least how do we know this won’t take all year to get through?

“Everyone is starting to get pretty bullish,” he added. “If everyone is banking on a whole bunch of pent-up demand getting unleashed and it doesn’t happen, well, that’s almost scary.”