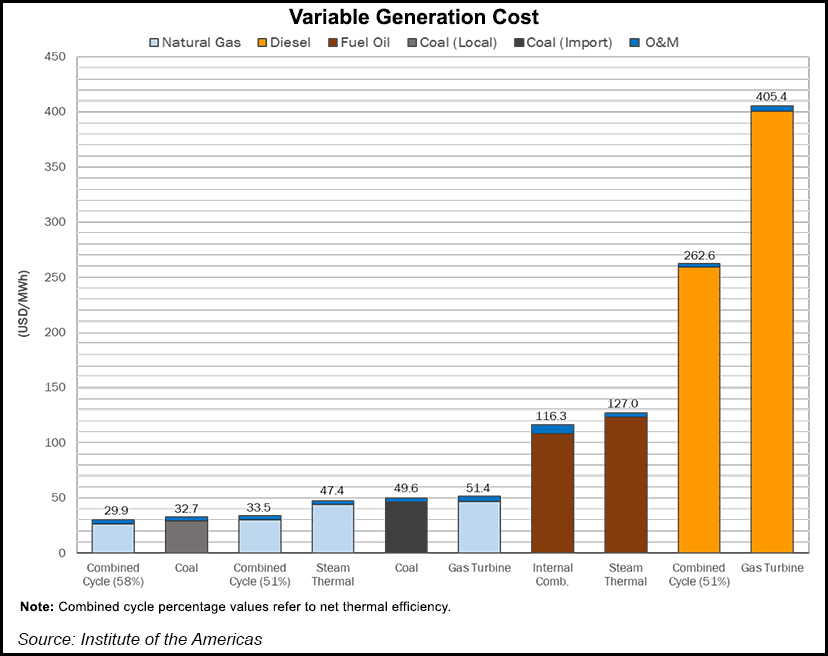 “CFE must accelerate the modernization of its generation system by installing new combined-cycle power plants, repowering its hydroelectric plants, and taking advantage of its natural gas-fired steam power plants to bolster grid resiliency to support increased wind and solar generation…so that obsolete coal and fuel oil-fired plants can be retired as soon as possible,” Barnes and Salazar said.

They argued that CFE can also promote the energy transition by purchasing clean energy in the auctions, which have been halted under President Andrés Manuel López Obrador.

López Obrador and CFE General Director Manuel Bartlett Díaz claim that CFE has incurred unnecessary losses as a result, an argument they have used to push a proposed constitutional overhaul of the sector.

The legislation, which the executive branch sent to Mexico’s Congress in September, would end the auctions as well as the current merit-based dispatch order based on variable generation costs that has allowed private renewable and gas-fired generators to thrive.

In reality, the reform would entail higher costs and emissions for CFE, Barnes and Salazar said, as it would promote the burning of fuel oil as the marginal generation source.

“Mexico has a surplus production of domestic high-sulfur fuel oil,” Barnes and Salazar said. “Because of international agreements, this surplus can no longer be exported for the production of bunker oil for maritime vessels.”

To provide an outlet for the excess fuel oil, CFE has been using it to power dual fuel generating units at combined-cycle power plants such as the Tula complex north of Mexico City, the authors said.

“The administration claims that investing in clean energy in Mexico is too expensive, but the Mexican people cannot afford to continue subsidizing the energy sector with their health in order to get rid of the dirty fuel oil produced in Mexican refineries, that no longer can be exported to international markets and which is much more expensive,” said Barnes.

The variable cost of producing power from CFE’s fuel oil-fired internal combustion units is estimated to be more than four times that of the combined cycle natural gas units that likely would be replaced in the dispatch order, according to the authors.

Carbon dioxide equivalent (CO2e) emissions from the fuel oil units, meanwhile, are nearly double that of their gas-fired plants, according to the study.

“Power plants fueled by coal or fuel oil instead of natural gas generate not only more greenhouse gas emissions, but also much larger amounts of other harmful pollutants” such as sulfur dioxide, nitrogen oxides and particulate matter, Barnes and Salazar said. “Imposing the use of fuel oil instead of natural gas or imported coal in dual fuel power plants, as has been done in the last couple of years, [causes] important economic losses as well as significant damage to human health and the environment.”

To promote cleaner and more efficient generation, authorities must preserve the auction mechanism set forth in the LIE, “which has allowed CFE to contract clean energy under increasingly competitive conditions,” the researchers said.

They recommended that, “The economic dispatch process based on marginal costs must also be preserved, with some minor adjustments to avoid impacting CFE’s subsidiary in charge of basic supply (e.g. power plants that have a supply contract with CFE should be brought on line based on the contract-designated electricity price, rather than their marginal cost).”

The former commissioners stressed the importance of investing in transmission and distribution networks as well, “in order to eliminate current restrictions that force the use of more expensive, less efficient power plants instead of taking full advantage of the system’s most efficient plants.”

The authors also called for removing the “various regulatory and non-regulatory barriers recently imposed by the current administration to new permits for wind and solar power plants,” as well as the remaining barriers for installing distributed generation systems.