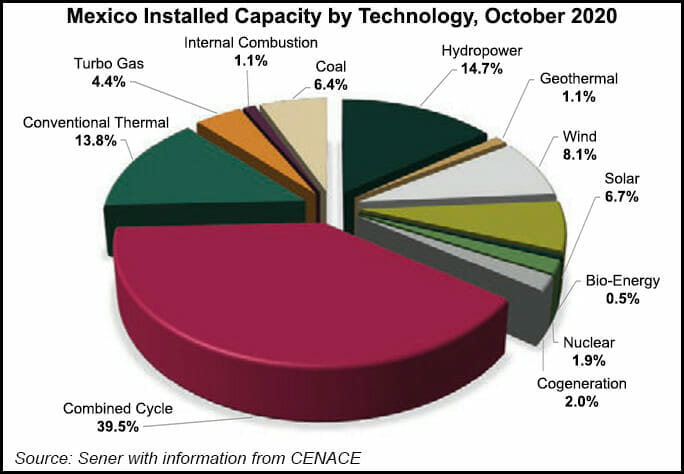 The plants, part of CFE’s 2021-2025 business plan, “will be located in strategic regions with the purpose of strengthening CFE and guaranteeing Mexico’s energy security,” the company said.

Mérida and Valladolid are in Yucatan state, where gas supply has been constrained in recent years. Supply conditions improved last September when Engie SA completed the Cuxtal I interconnection linking its Mayakan pipeline system on the Yucatan Peninsula with Mexico’s Sistrangas national pipeline grid.

Engie is planning to expand the 250 MMcf/d Mayakan system through the Cuxtal II project, which could see capacity expanded to more than 500 MMcf/d.

The port of Tuxpan in Veracruz state is connected to both Sistrangas and to the 2.6 Bcf/d Sur de Texas-Tuxpan subsea pipeline owned by TC Energy Corp. and Infraestructura Energética Nova.

The González Ortega plant is envisioned for Baja California state, which receives gas via pipeline from the United States and in the form of liquefied natural gas (LNG) via the Energía Costa Azul terminal.*

Baja California Sur, meanwhile, is isolated from both the U.S. and Mexico pipeline networks.

New Fortress Energy is developing a small-scale LNG import terminal in Baja California Sur’s port of Pichilingue, which the company has said it aims to complete by the end of this year.

The San Luis Río Colorado plant is planned for the northwestern state of Sonora.

The projects are to be awarded in three packages of two projects each, according to CFE.
CFE said it presented the proposed projects to a gathering of Mexican and international firms, which “showed interest and sent their pre-registration documents to participate” in the tender.

The plants would be funded by the Fideicomiso Maestro de Inversión, or master investment fund, approved by CFE’s board last July. The fund was created to fulfill President Andrés Manuel López Obrador’s mandate to strengthen and “rescue” CFE by restoring its power generation market share to 54%.

López Obrador and the director general of CFE, Manuel Bartlett Díaz, have expressed vehement opposition to the 2013-2014 energy reform, which allowed international firms to compete directly with CFE in the generation segment. They also have criticized the independent power producer (IPP) scheme, which has been in effect since 1994. Under the IPP model, generators sell their output to a sole offtaker, CFE.

In related news, a Mexican federal court judge on Thursday suspended the implementation of a controversial power sector law that would give priority to CFE in the electricity dispatch order over private sector generators.

After swift approval by both houses of congress, the law had been published Tuesday (March 9) in Mexico’s Federal Register.

Numerous groups, including the U.S. Chamber of Commerce, Mexico’s Consejo Coordinador Empresarial, the Global Wind Energy Council and the Global Solar Council have spoken out against the law. Opponents claim the law would impede Mexico’s clean energy transition and violate free trade pacts, such as the United States-Mexico-Canada-Agreement.

*An earlier version of this story misstated the planned location of the González Ortega project.