A U.S. subsidiary of Mexico’s state power company Comisión Federal de Electricidad (CFE) posted a 14% year/year increase in pipeline natural gas exports from the United States to Mexico during the second quarter, according to the U.S. Department of Energy. 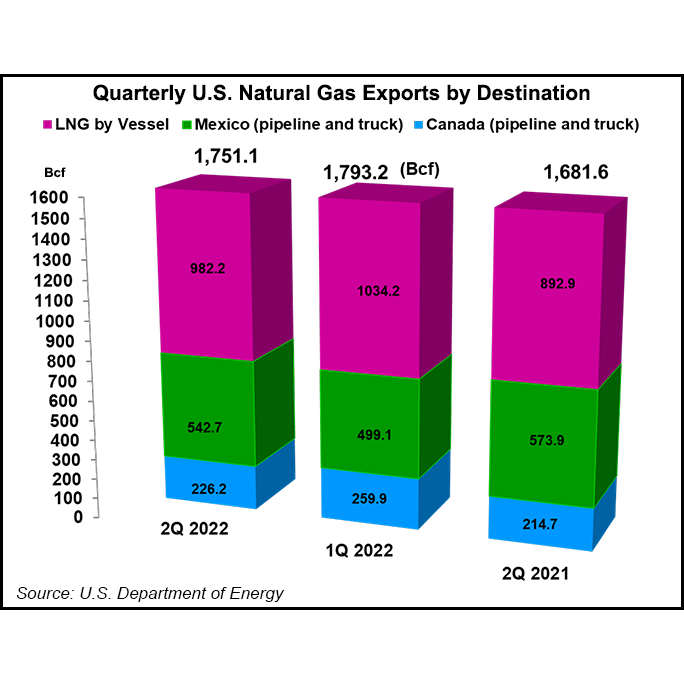 Amid stagnant production in Mexico, CFE sources gas from the United States in order to fuel the company’s growing fleet of gas-fired power plants. It also markets gas to third parties within Mexico.

CFEi was the No. 12 marketer by volume in NGI’s latest quarterly survey of North American marketers and traders.

Pemex Transformación Industrial, a subsidiary of state oil company Petróleos Mexicanos (Pemex) exported 60,829 MMcf or 668 MMcf/d from the United States during the period, down from 89,218 MMcf (980 MMcf/d) a year earlier, DOE data show.

Mexico was the destination for 70.6% of U.S. pipeline exports, with the remaining 29.4% going to Canada.

The United States exported gas to Mexico via 19 exit points along the border during the second quarter. About 61% of exports transited from one of four Texas border cities: Rio Grande City and Brownsville in South Texas, and Presidio and San Elizario in West Texas.

Rio Grande City was the winner, accounting for 127.6 Bcf or 1.4 Bcf/d. Brownsville is the starting point of the 2.6 Bcf/d Sur de Texas-Tuxpan offshore pipeline.

Exports to Mexico via the Permian Basin in West Texas doubled from 0.6 Bcf/d in 2019 to 1.2 Bcf/d in 2021, driven by infrastructure coming online in Mexico, according to a recent note by the U.S. Energy Information Administration.

Also speaking at the LDC event was former CFEi CEO Guillermo Turrent. He said the partnerships are positive news, but cautioned that capacity expansions would be needed to accommodate all the new projects.