CFEnergia will provide ArcelorMittal with 160MMcf/d over the duration of the 12-month contract. The steelmaker is Mexico’s largest industrial consumer of natural gas, according to the release.

“This is the first time in its history that CFE, empowered by the tools it received under the energy reforms, will sell natural gas to ArcelorMittal,” the power company said.

ArcelorMittal operates six facilities in Mexico with a total steel production capacity of 6.5 million tons/year. Its base of operations is the Pacific port city of Lazaro Cardenas in Michoacan state, some 220 miles from the Manzanillo LNG import terminal.

In May, the Luxembourg-based steel company won 161,773 GJ/d in the first open season for domestic capacity on the Sistrangas national pipeline system in Mexico.

The 2013 energy reforms have allowed CFE to expand beyond its core power business to seek out additional sources of revenue. In 2015, the utility created two fuel marketing and trading units, CFEnergia and CFE Internacional (CFEi), the latter of which focuses on imports.

CFEnergia, in turn, markets around 3 Bcf/d of natural gas in Mexico. Its main focus is securing fuel for CFE’s fleet of thermoelectric power plants, which the utility is in the process of converting from oil fuels to natural gas.

Fuel sales to third parties in Mexico accounted for about 1% of the 213 billion pesos ($11.8 billion) in revenues that CFE recorded during the first six months of 2017, according to its unaudited second quarter results.

“3 Bcf/d puts us in the top 13 companies in U.S. gas marketing industry,” Guillermo Turrent said at the US-Mexico Natural Gas Forum, held August 14-16 in San Antonio, TX. He is CEO of both CFEnergia and CFEi.

“Over the next 3-4 years, we’ll probably be in the top 5, with all of the demand as [new] pipelines are fully utilized and we are able to keep market share,” he said.

CFEnergia and CFEi are using transport contracts as collateral in their supply agreements, according to Turrent, since the parent company is reluctant to take on additional credit exposure after sponsoring a massive build-out of Mexico’s natural gas pipeline infrastructure.

“We’re basically using transportation as a commodity,” Turrent said. “What we’ll say is that if CFEnergia or CFEi fails to perform in this contract, they will release this capacity to you.”

“We’ve done it in such a way that the banks like it, and it’s a good way for us to limit our credit exposure for the two marketing and trading arms of CFE,” he added.

Since late 2012, CFE has tendered some 6,400km of new pipeline projects, most of which are due for completion in 2018. The pipelines are all anchored by 25-year contracts with CFE and will supply natural gas to a series of combined-cycle power projects it has awarded to private developers. 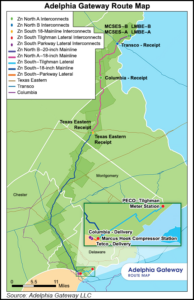