Mexico’s state power utility, the Comisión Federal de Electricidad (CFE), has approved the construction of three natural gas-fired combined cycle power plants with total capacity of 1,720MW. The projects will be built in the center and northeast of the country, the company said in a statement. 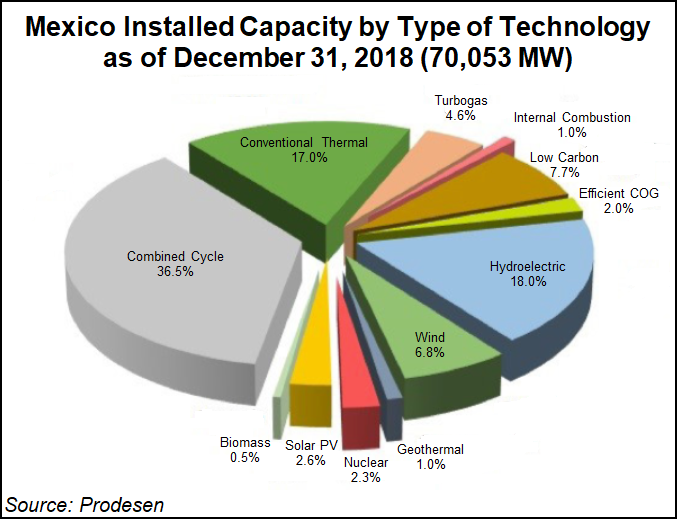 News of other natural gas-fired power plants is expected soon. The company said earlier this year it will announce tenders for construction of five combined-cycle plants with total capacity of 3,400MW by the first quarter of 2020.

Manuel Bartlett, director general of the CFE, said these and other new plants would raise the state’s share of Mexico’s total power generation to 54% by 2024, when the term for the current administration of President Andrés Manuel López Obrador will come to an end.

At present, the CFE’s 157 power plants have a combined effective capacity of 43GW.

CFE officials have mentioned that they aim to conclude all construction in three years, but that target could be over-ambitious, Mark Repsher, energy market expert at PA Consulting told NGI’s Mexico GPI.

“That’s not to under play the CFE’s capacity to undertake such a program. But there are two big issues with which they’re trying to do.

“One is the timing, which appears to be very accelerated, taking account of the experience of such plans being carried out by the CFE and private developers in the past. Then it took about five to six years to build a plant.”

The other problem is money.

The CFE reported a net loss in this year’s first quarter of 13.9 billion pesos ($716 million). The CFE’s balance sheet would not be able to support these projects and the government doesn’t have an endless reserve of money, Repsher said.

However, there appears to be an element of pragmatism to Bartlett’s ideology. His statism makes headlines, “but if you peek behind the curtains construction of the new plants will have to be achieved under some sort of joint venture with the private sector.”

Repsher sees load growth in Mexico at about 3% each year.

“In the 2020-27 period,” Repsher said, “we see the need for some 10 gigawatts of combined cycle capacity in the Mexican market, so that’s not out of line with what the CFE is proposing to do, though with a timeline a little bit longer, taking into account load growth rates and retirements of plants.

“And our general assumption is that most of the projects will come out of the private sector.”

Mexico expects to add an estimated 29,294 MW of combined-cycle gas-fired power generation capacity over the next 15 years, according to the 2019-2033 Prodesen power sector development plan published in late May by energy ministry Sener.

The projected capacity additions compare with a forecast of 28,105 MW for the 2018-2032 period outlined in last year’s Prodesen plan under the previous government. Sener is required to update the document every year.

Amid surging production of inexpensive gas in the United States, Mexico has undertaken a massive buildout of gas pipelines since 2012, and has sought to switch from fuel oil to gas in the power sector. The recent end to a pipeline conflict between the CFE and pipeline developers should help to further the spread of natural gas throughout Mexico.

“Whether the CFE or Iberdrola or whoever, building the combined cycles is going to create a severe uptick for demand in natural gas in the country,” said Repsher, adding that San Diego-based Cisterra, a subsidiary of Blackstone, and Spain’s Grupo Cobra and Australia’s Macquarie Capital have shown interest in the Mexican power market.

“And they are probably peeking not only at combined cycles but installations, renewables, they’re really looking at the whole playing field,” said Repsher.