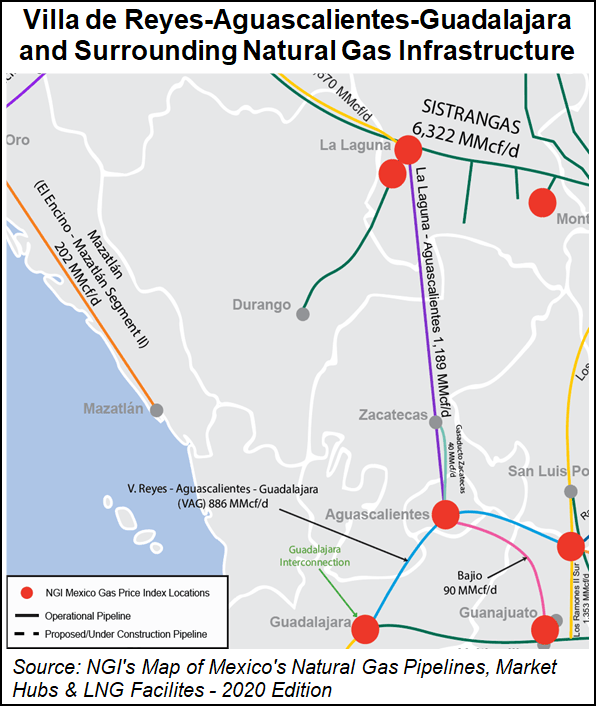 VAG constitutes the final leg of Fermaca’s larger Waha-to-Guadalajara or “Wahalajara” system, which transports gas from the Permian Basin in West Texas to the industrial center of Guadalajara in the Bahío region of central-western Mexico.

CFE is the anchor customer for Wahalajara under a long-term, take-or-pay firm transport capacity agreement.

The completed system will allow the region to access “the cheapest natural gas in the world,” CFE said.

The 388-kilometer (241-mile), 36-inch diameter VAG segment will supply gas directly to the cities and surrounding areas of San Luis Potosí, Aguascalientes, and Guadalajara, CFE said, and through its interconnections reach areas such as Colima, Michoacán and central Mexico, the state-owned company said.

The system also allows CFE, through fuel marketing subsidiary CFEnergía, to expand access to customers such as steelmaker ArcelorMittal SA, the largest industrial gas consumer in the country.

CFE said its current supply contract with ArcelorMittal “represents for CFEnergía revenue of more than $456 million.”

In total, CFE expects to save $182 million on its gas import bill in 2021 because of the new infrastructure.

CFE hailed the project as aligning with President Andrés Manuel López Obrador’s “energy sovereignty” mandate, and said it would contribute to industrial development.

Fermaca CEO Manuel Calvillo said “as a 100% Mexican company, we are committed to the well being of Mexicans and the economic growth of our country. Our natural gas pipeline network allows us to bring development, energy for industry, opportunities for growth and better living conditions for Mexican families.”

Wahalajara is expected to provide a needed outlet for pent-up associated gas volumes at Waha in West Texas, and to help stabilize prices at the notoriously volatile hub.

Day-ahead spot prices at Waha averaged minus 3.0 cents on Friday after falling 39.0 cents day/day amid cooler forecasts in the western United States and subsequent plunging prices throughout the region.

Pipeline natural gas exports from the United States to Mexico have continued to rise, even as the coronavirus pandemic has ravaged both countries’ economies.

The U.S. Energy Information Administration said Monday the United States in 2019 exported more gas by pipeline than it imported for the first time since at least 1985, thanks to rising demand from Mexico and increased pipeline capacity to both Mexico and Canada.

Fermaca was one of several pipeline developers with whom CFE demanded contract renegotiations last year.

López Obrador and CFE general director Manuel Bartlett Díaz alleged the take-or-pay clauses of the contracts that anchored the pipelines’ construction were unfair to CFE.Most notably, the dustup delayed the in-service date of the 2.6 Bcf/d Sur de Texas-Tuxpan pipeline before an agreement was reached with pipeline owners TC Energy Corp. and Infraestructura Energética Nova (IEnova).