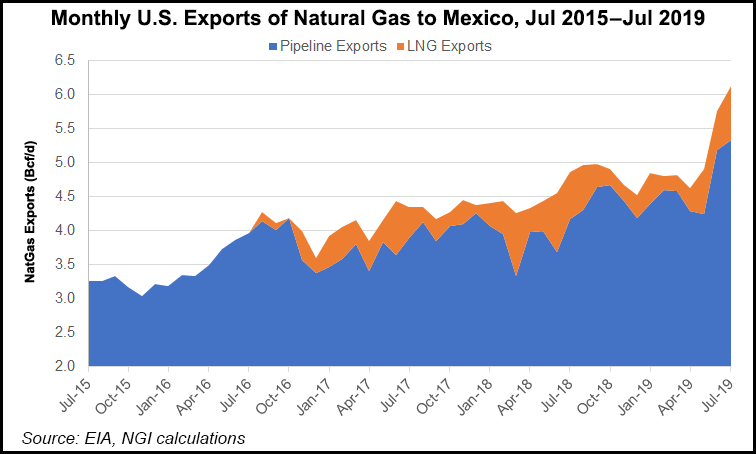 The announcement came last week at a press conference headed by the CFE CEO, Manuel Bartlett, and comes just days after the 2.6 Bcf/d Sur de Texas-Tuxpan natural gas pipeline went into operation, the first of many long-delayed natural gas pipelines expected to come online in the next few years.

The CFE’s corporate financial director, José Antonio Rojas, told the conference that Hacienda (the Finance Ministry) had approved plans for the tenders, as has the CFE board, which is chaired by Energy Minister Rocío Nahle.

Rojas said that the plants combined are expected to generate 3,405 MW and represent a total investment of $2.4 billion. And, he added, “they will be developed under the Pidiregas scheme.”

Pidiregas is a public-private investment scheme devised as a means of providing an injection of private capital to alleviate the strained financial circumstances of government firms. This year alone, the CFE has already pencilled in more than $8 billion in Pidiregas projects.

Rojas said that, in chronological order, the tenders for the new units will begin with an 860 MW combined-cycle plant in Salamanca, Guanajuato, and in the state capital of San Luis Potosí. Both lie in central Mexico.

Tenders for the first three plants are to be held “as soon as possible,” Rojas said.

A 642 MW combined-cycle plant has been earmarked for Lerdo, some 50 miles west of Mexico City and in the State of Mexico, according to the plans.

A 500 MW plant, whose technology has yet to be defined, is to be located in San Luis Río Colorado, Sonora, across the border from Arizona in the United States.

Finally, the CFE plans a new power plant for energy-starved Peninsula of Yucatán, where the state capital, Mérida, has been slated for a 500 MW combined cycle facility.

The issue of getting sufficient supplies of gas to existing plants in Yucatán however has yet to be resolved, let alone those for the new plant.

Miguel Santiago Reyes, CEO of CFEnergía, the state company’s marketing arm, suggested that the state oil company Petróleos Mexicanos (Pemex) could inject the under-utilized Mayakán pipeline with gas by means of a swap from somewhere else in Mexico given the new availability of imported gas via the marine pipeline.

The power projects are seen as key to reactivating an economy that, though stable, is stuck. The most recent predictions by analysts suggest that this year’s growth is unlikely to reach more than 1%. President Andrés Manuel López Obrador has pledged growth of 4% during his 2018-2024 term.

In his press conference Wednesday morning, the president said that some 1,600 infrastructure projects were currently in consideration worth billions of dollars.

“This is really important, because it would help us to spur economic growth,” he said.

Salazar and Del Valle have made it very clear that they want his presidency to succeed. So too has Slim, despite his early spat with López Obrador in the early days of his presidency, when he was clearly unsettled by the president’s decision to cancel the partially-built $15 billion airport for the capital. Salazar, Del Valle and Slim, who was key to brokering the truce that led to the end of the pipeline conflict between CFE and private developers, all have important business interests in Mexican energy.

Mexico expects to add an estimated 29,294 MW of combined-cycle gas-fired power generation capacity over the next 15 years, according to the 2019-2033 Prodesen power sector development plan published in late May by energy ministry Sener.

The projected capacity additions compare with a forecast of 28,105 MW for the 2018-2032 period outlined in last year’s Prodesen plan under the previous government. Sener is required to update the document every year.