Mexico’s CFE International LLC (CFEi) is suing two of its former executives in a Texas court in relation to natural gas contracts awarded to a U.S. firm. 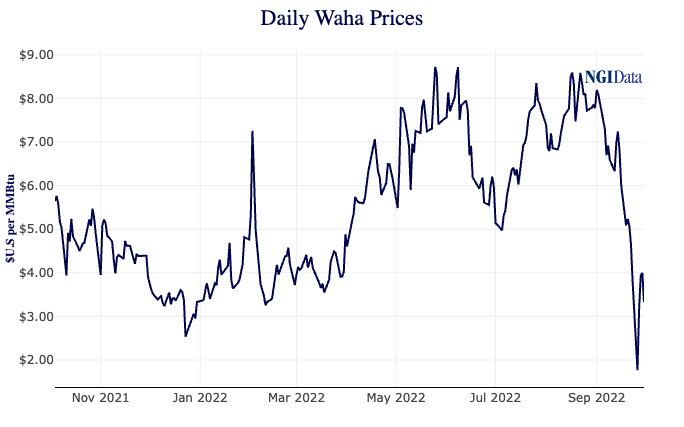 CFEi is alleging that under the previous government, former executives “awarded billions of dollars of unnecessary and overpriced natural gas supply and pipeline contracts” to WhiteWater Midstream LLC through non-competitive processes, and in violation of the executives’ fiduciary duties to CFEi.

WhiteWater, which is not named as a defendant in the civil complaint, has denied that any impropriety occurred in the awarding of the contracts.

“CFE’s claims have no merit and follow explicit threats made by CFE officials related to their attempt to renegotiate the terms of legitimate, market-based contracts,” a WhiteWater spokesperson told NGI.

Meanwhile, WhiteWater has said that CFE is in breach of contract for nonpayment for gas deliveries during Winter Storm Uri in February 2021, when natural gas prices skyrocketed.

“CFE failed to meet its obligations, arbitration was initiated by WhiteWater and the company is continuing to pursue its rights via that process,” the spokesperson added.

CFEi, for its part, is seeking at least $1 million in monetary damages from the former executives and “actual damages in an amount far in excess” of $1 million, according to the complaint filed in Harris County, TX.

The contracts in question include one for the construction of a natural gas pipeline in West Texas connecting an existing pipeline with the Waha header in order to supply CFEi with gas sourced from Waha.

According to the complaint, CFEi could have sourced gas from companies that already had access to the Waha header via existing pipelines. “Indeed, several such companies submitted bids” in response to a request for offer (RFO) procurement process launched for the project by CFEi, the company said.

The complaint also references two natural gas supply contracts with WhiteWater for up to 1 Bcf/d each for 15-year terms, one in West Texas and the other in South Texas.

In each case, according to the complaint, WhiteWater secured the contract despite other firms offering to supply the same volumes under more favorable terms.

CFEi is a major player in the North American market. CFEi’s total marketed volumes averaged 3.8 Bcf/d during the second quarter, according to a recent NGI survey.

Most of the disagreements have been resolved amicably, and companies involved continue to work with CFE on developing new natural gas infrastructure.