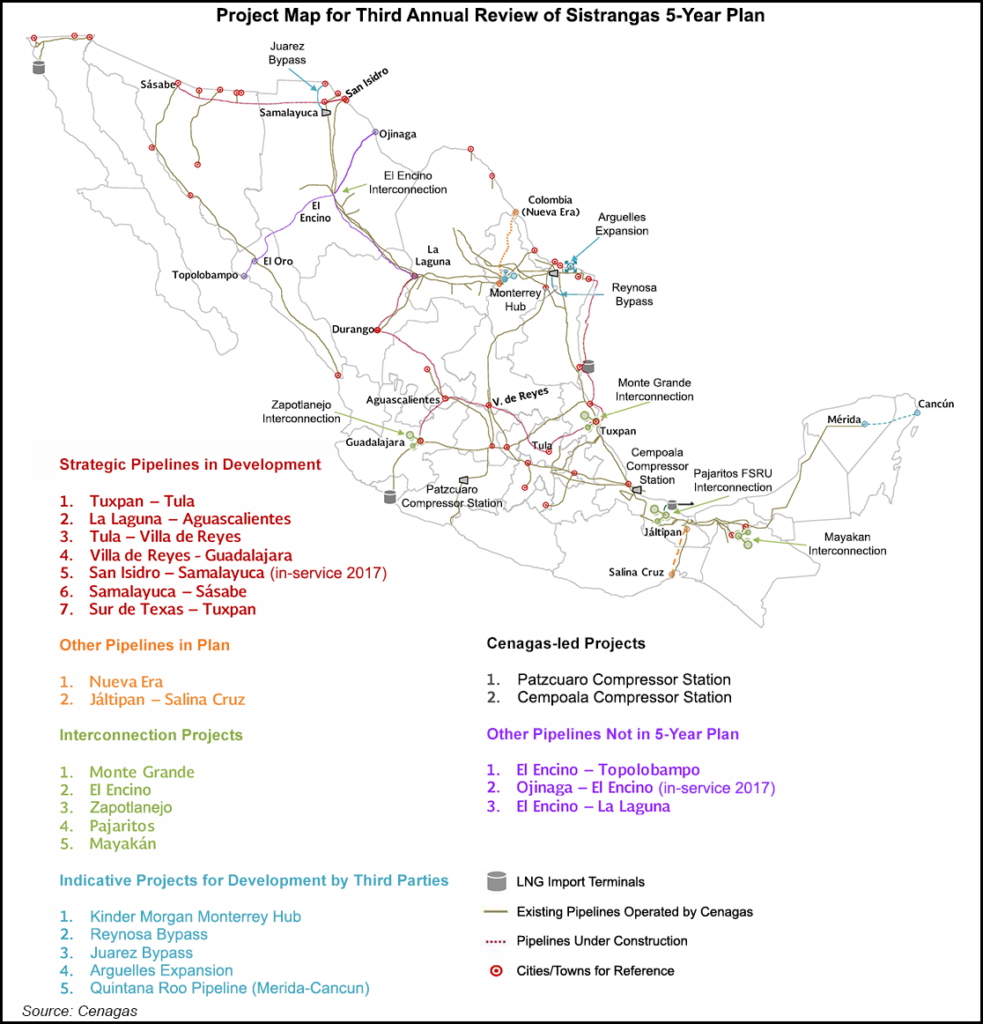 Cenagas, which operates the Sistrangas national pipeline network, will use the results of the consulta publica, or public consultation, to draft the first iteration of its 2019-2024 transport expansion plan.

Energy ministry Sener approved Cenagas’s third and final revision of the 2015-2019 expansion plan in March 2018. Cenagas is required to update the five-year plan annually as part of a larger mandate to ensure the optimal use of Mexico’s pipeline grid.

The expansion plan mainly centers around projects outside the Sistrangas network that are tendered to private sector developers. These projects include the seven delayed pipelines commissioned by state power utility ComisiÃ³n Federal de Electricidad (CFE) that have drawn criticism from President AndrÃ©s Manuel LÃ³pez Obrador.

He and CFE general director Manuel Bartlett have said that CFE should not have to make fixed capacity payments to the developers of the delayed projects, which face force majeure setbacks ranging from lawsuits to adverse weather conditions.

Consulta Publica 2019, which concludes on April 4, will include seven informational forums in different regions of the country.

The consultation is non-binding, and does not constitute an open season.

The idea is “to have a commercial perspective,” Eduardo Prud’homme, the former head of Cenagas’ technical and planning unit and an NGI contributor, told NGI’s Mexico GPI, describing the consulta publica as “the first non-binding step before [starting] a binding open season.”

“The consulta Cenagas was a good idea to start the notion of Cenagas as a central planner in the gas industry and displace Pemex,” he said.

The process is open to actors throughout the gas supply chain, including end-users, producers, transporters, distributors, and marketers. Interested parties can click here to formally express interest in the consultation, and learn more about the process.

The third revision of the 2015-2019 plan incorporated five interconnection projects to link the Sistrangas with non-Sistrangas infrastructure, as well as an underground gas storage project for which Cenagas was preparing to launch a tender when the government changed hands on December 1.

The Consulta Publica helps Cenagas identify which projects to discard from the five-year plan, based on the feedback from potential offtakers, Prud’homme said.

The new administration has not indicated if or when it plans to proceed with the storage tender.

Guaymas-El Oro entered operation in 2017, but has been shut off for two years amid a local dispute with a faction of the local Yaqui indigenous community.

The startup dates for Tuxpan-Tula and Tula-Villa de Reyes remains unclear, due to an impasse with local authorities. The other five projects are all officially slated to enter operation this year.