Mexico produced 5.334 Bcf/d of natural gas in April, state oil and natural gas company Petroleos Mexicanos (Pemex) reported, a drop of 9.9% from the 5.921 Bcf/d recorded a year ago. 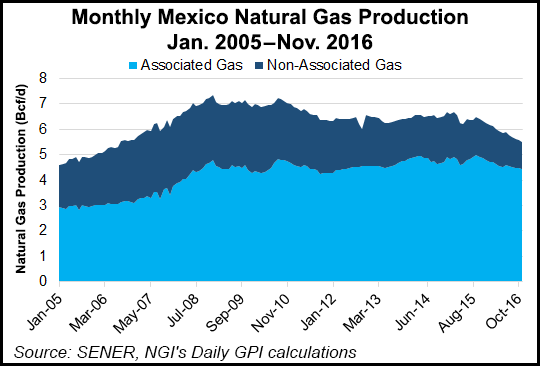 April’s natural gas production figure also represents a small decrease from the 5.383 Bcf/d that was accounted for during March 2017.

Pemex has historically regarded gas as a byproduct of oil exploration and production. A decline in gas prices reinforced that tendency, particularly as earnings from oil production have been used to prop up the country’s finances. Until recently, oil earnings accounted for about one-third, of the state’s income.

By contrast, the reduction in gas prices spurred the construction by CFE of combined-cycle power plants and conversion of oil-fired units.

Mexico’s gas production peaked in 2009 at 7.03 Bcf/d. Since then, production in the once-prolific dry-gas basins of Burgos and Veracruz has declined sharply. The Burgos Basin lies across the border from South Texas; Veracruz is in the southern Gulf of Mexico region.

Burgos peaked at 1.515 Bcf/d in 2009. Last April it turned out 698 MMcf/d. Veracruz peaked at 957 MMcf/d in 2008; in April it produced 280 MMcf/d. In the case of Burgos in particular, part of the problem has been the presence of organized crime in the area, where Pemex engineers and employees of contractors have been targeted.

Today, the Cantarell field is Mexico’s leading producer of natural gas, at 1.278 Bcf/d, but the gas is heavily polluted with nitrogen that was used for injection in a bid to to reach a crude production peak of 2.38 million b/d in 1994, which made it the most productive offshore field of its time.