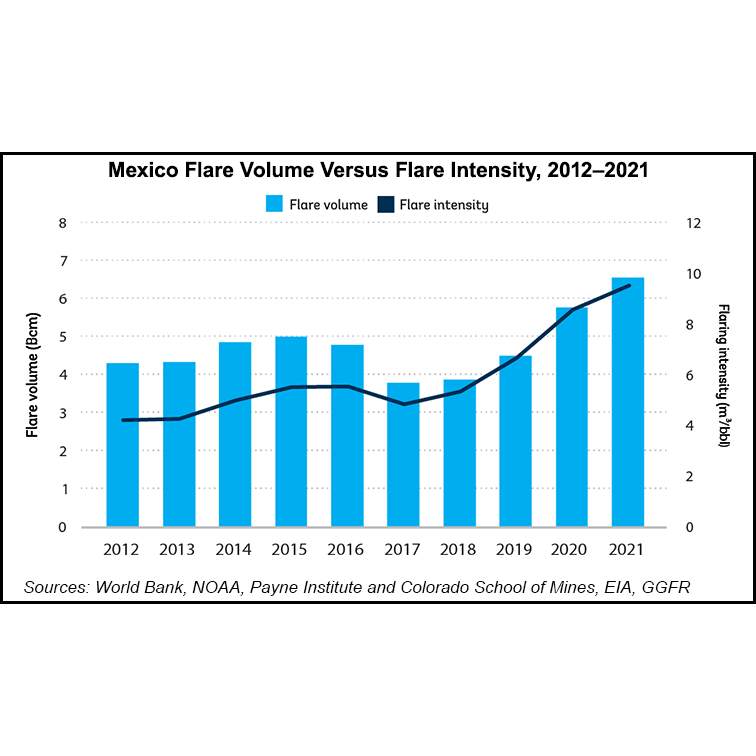 The investment is one of 10 actions Mexico is undertaking to fight climate change, the president said in a video address to the Major Economies Forum on Energy and Climate (MEF) convened by U.S. President Joe Biden.

As part of the event, Mexico joined the United States, the European Union and eight other major economies in joining the Global Methane Pledge Energy Pathway. The initiative encourages countries  “to capture the maximum potential of cost-effective methane mitigation in the oil and gas sector” and to eliminate routine flaring of natural gas “as soon as possible, and no later than 2030,” the White House said.

López Obrador, commonly known by his initials AMLO, did not provide a timetable for disbursement of the $2 billion or achieving the 98% drop in emissions.

Methane leaks and flaring remain rampant in Mexico despite increasing global pressure to curb both.

A recent study led by scientists from Spain’s Universitat Politècnica de València found that an offshore platform in Mexico’s offshore Zaap field released about 40,000 metric tons of methane into the atmosphere during “a 17-day ultra-emission event” in December 2021. The leak was equivalent to about 3% of Mexico’s annual oil and gas emissions.

Last year, a study led by the Environmental Defense Fund found that Pemex natural gas processing facilities were emitting “exceptionally high levels of methane pollution” at 10 times the rate being reported by the government.

“Despite oil production declining over the last 10 years, Mexico has increased flaring by over 50%, with a sharp uptick since 2018, rising from 3.8 Bcm to 6.5 Bcm in 2021,” researchers noted. “This increase suggests oil production is occurring at wells with higher gas-to-oil ratios and, with no outlet for the gas, the additional gas produced is flared.”

López Obrador campaigned on a pledge to reverse declining oil output at Pemex, though production has continued to drop amid the natural decline of its maturing legacy fields.

World Bank researchers said that “in the Marine Region, where the highest gas volumes are flared, the use of nitrogen for artificial lift results in the production of gas with a high nitrogen content, which cannot be accepted in the domestic gas network. As a result, a large amount of this gas is flared both offshore and at onshore gas processing plants.”

Other steps highlighted by López Obrador include the modernization of 16 hydroelectric plants owned by state power company Comisión Federal de Electricidad (CFE), with the goal of increasing their collective output by 2,085 GWh/y. CFE also is developing a 1 GW photovoltaic solar park in Sonora state, the president highlighted.

Critics including environmentalists, renewable energy trade groups and the U.S. State Department have accused López Obrador of hindering the energy transition through controversial reforms, namely in the power sector. Legislation passed in 2021, for example, gives preferential treatment to CFE in the electricity dispatch order over privately owned renewable assets.

Concerns have also been raised about increased production of fuel oil by Pemex refineries, and burning of fuel oil by CFE in its power plants. A report this month by the Mexico Evalua think tank noted that CFE used 34.7% more fuel oil in 2021 than in 2020.

Although López Obrador’s relationship with the private energy sector has often been adversarial, he highlighted recent talks with 17 U.S. energy companies, which he said have committed to adding 1,854 MW of solar and wind capacity in Mexico.

“As a result of these agreements, we are exploring the creation of solar parks on the border of Mexico with the United States, as well as the construction of transmission networks to allow the export of electricity to California” and other U.S. states, said López Obrador.

He also noted the ongoing modernization of Pemex’s six operating oil refineries in Mexico, its recent acquisition of Shell plc’s operating stake in the Deer Park refinery in Texas, and the Dos Bocas refinery under construction in Tabasco state.

The overhaul of Mexico’s refining system also includes two new coker units, one of which is under construction at Pemex’s Tula refinery. Construction on another is set to begin shortly at the Salina Cruz refinery in Oaxaca state.

Mexico also is aiming for zero-emission vehicles to account for half of all vehicles produced in the country by 2030, López Obrador said. He cited recent legislation to nationalize lithium extraction as crucial to achieving this goal.

He also reiterated the country’s goal of having 35% of its electricity come from clean sources by 2024.