Mexico’s state-owned electric utility said it has started to the bidding process for nearly $10 billion in energy infrastructure projects, including eight natural gas pipelines, one of which would transport gas under the Gulf of Mexico (GOM) from South Texas to the Mexican Gulf Coast. 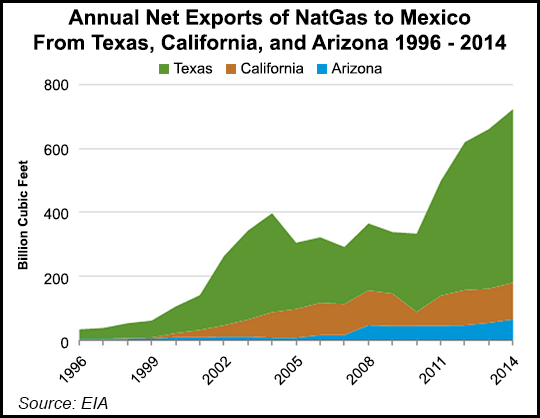 On Monday, the Comision Federal de Electricidad (CFE) said the 24 infrastructure projects call for adding more than 2,385 kilometers (1,482 miles) of natural gas pipelines to Mexico’s national gas pipeline system. Other parts of the tender would see an additional 1.4 GW of installed capacity and 3,084 kilometers (1,916.3 miles) of electric transmission and distribution lines added to the national power grid.

Collectively, the utility said it could receive investment bids of $9.84 billion.

CFE Director Enrique Ochoa Reza said the eight natural gas pipelines in the latest tender, as well as another 11 pipelines currently under construction from previous tenders, would help meet President Enrique Pena Nieto’s goal of a 75% increase in mileage of the national gas pipeline system by December 2018, when he leaves office (see Daily GPI, May 1).

According to the translated CFE statement, Mexico Secretary of Energy Pedro Joaquin Coldwell added that the new gas pipelines “will allow us to meet the energy requirements of the central, eastern and western regions of the country…This pipeline network will allow major industrial and commercial customers to cut costs, make companies more competitive, and the country as a whole will be more attractive for the construction of new factories,” (see Daily GPI, June 2a).

The biggest natural gas pipeline project is the South Texas-Tuxpan Pipeline, a 42-inch diameter line that would run 800 kilometers (497.1 miles) under the GOM from South Texas to Tuxpan, in the state of Veracruz. The pipeline, valued at $3.1 billion, would have 2.6 Bcf/d of capacity and have interconnections with the Nueces-Brownsville and Tuxpan-Tula pipelines.

The other seven gas pipeline projects are the:

The utility expects the Topolobampo Branch Pipeline to be in service by March 2018, followed by the South Texas-Tuxpan and Nueces-Brownsville pipelines in June 2018.

CFE added that since the Nueces-Brownsville Pipeline “will be located in the United States, it will be tendered in accordance with the rules of that country, through a request for proposal.”

The remaining 16 infrastructure projects include construction of four power plants, three transmission lines and substations, and nine electricity distribution projects, according to CFE.

Earlier this month, Texas Eastern Transmission LP filed paperwork with FERC for a project to transform its existing Line 16 system into bidirectional service, giving it the ability to provide gas to CFE (see Daily GPI, June 2b). Spectra Energy Partners told the Federal Energy Regulatory Commission that it plans to provide 400,000 Dth/d of new incremental service to the utility, an anchor customer [CP15-499].

Last year, Mexico’s Congress enacted legislation introduced by Nieto to reform the nation’s energy policies and break some of the monopolistic power of state-owned Petroleos Mexicanos (Pemex) (see Daily GPI, Aug. 7, 2014; May 2, 2014). Among the reforms was a directive allowing outside investment in Mexico’s energy sector.

In March, private equity firms BlackRock and First Reserve agreed to invest about $900 million for a 45% stake in the second phase of Pemex’s Los Ramones pipeline project, which would carry gas produced in the United States to markets in Mexico (see Daily GPI, March 27). First Reserve and Pemex then announced a separate $1 billion agreement in April to build infrastructure across the country (see Daily GPI, April 7).