With more than 50 million vehicles on Mexican roads, Andres Alfonso Bayona Insignares, President of the Mexican Association of Vehicular, Compressed and Liquid Natural Gas and Biogas, sees “a tremendous amount of development opportunities” for vehicular natural gas as a transitional fuel. 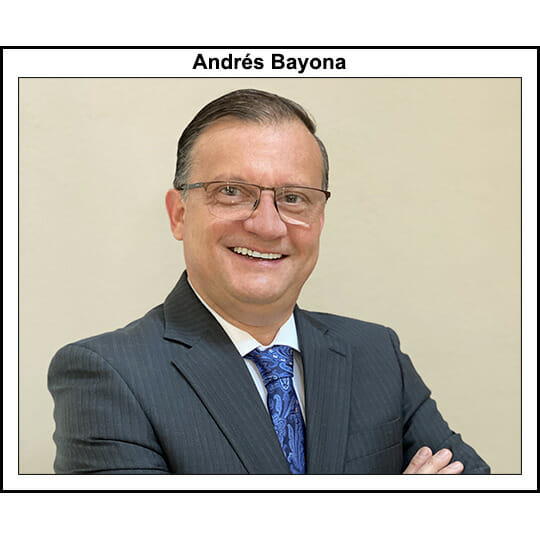 “Initially, we are focused on locating small niches in the market and, from my perspective, a niche we should target is the fleets of high consumption vehicles, such as buses,” Bayona told NGI’s Mexico GPI. “Some cities in Mexico are now starting to roll out fleets of buses required for mass transit that are using vehicular natural gas, which presents an important opportunity for growth. Additionally, there is a big opportunity in the market for tractor trailers” to convert to vehicular natural gas, he said.

Bayona, who has been President of the Mexican Association of Vehicular, Compressed and Liquid Natural Gas and Biogas since 2014, is also a partner and CEO of Promotora Energética E3, which he founded in 2011. Promotora Energética E3 is dedicated to the development of vehicular natural gas projects, virtual natural gas pipelines, LNG and biogas projects in Mexico and Latin America.

An industrial engineer by trade, Bayona has 32 years of experience in the industry and specializes in the development of renewable energies, such as natural gas, biogas and hydrogen. He holds an MBA and undergraduate degree in industrial engineering from the Universidad del Norte in Barranquilla, Colombia.

NGI: How big is the vehicular natural gas market in Mexico, and how has it been developing in recent years?

Bayona: We gave a presentation to the Energy Ministry (Sener), members of the Economy Ministry and other entities last year and, what I discussed with them, is that the vehicular natural gas market in Mexico is an incipient market that has a tremendous amount of opportunities, similar to other markets that are in transition towards other energy sources, such as electricity or hydrogen-powered automobiles. Currently, the Mexican market is growing by 1 or 2 million each year. So, the first important point to mention is that, with more than 50 million vehicles in the market, that number won’t be entirely converted to electric vehicles in five or 10 or 20 years.

So, currently we have an opportunity in the vehicle market given the global energy transition that includes natural gas as a key component. As we know, natural gas is considered to be the primary fuel that will be used as we transition to other sources such as electricity or hydrogen powered vehicles. With that understanding — and with a vehicular market of 50 million automobiles — we’ve conducted studies and determined where we should first focus efforts as we undergo this transition. We feel there is a very clear opportunity for natural gas among vehicles that require high fuel consumption, which is an area of the market we’ve concentrated our efforts on initially.

NGI: What is the plan forward to transition high fuel consumption vehicles to vehicular natural gas?

Bayona: Initially, we are focused on locating small niches in the market and, from my perspective, one we should target is the fleets of high consumption vehicles, such as buses. The transition to vehicular natural gas is already starting in places like Monterrey, for example, as well as Guadlajara in Jalisco, and also some of the passenger buses known as “combis” in Mexico City. Some cities in Mexico are now starting to roll out fleets of buses required for mass transit that are using vehicular natural gas, which presents an important opportunity for growth. Additionally, there is a big opportunity in the market for tractor trailers. With tractor trailers, as we know, fuel consumption is massive and a full tank of gasoline can be in the thousands of liters. And given the amount of transit and mileage that tractor trailers cover each year, it’s sometimes as much as 8,000-kilometers each month, for example. With that amount of consumption, there’s great opportunity for vehicular natural gas. So, in addition to buses, tractor trailers are another niche market that presents a development area for vehicular natural gas.

In large cities, as we know there are significant issues with contamination and thus there is another opportunity to utilize vehicular natural gas for fleets of taxis or utility vehicles that are used to distribute merchandise or goods, such as industrial trucks, or vehicles that deliver Bimbo products, for example. So, these are really the niche markets where I see good opportunities for the penetration of vehicular natural gas in Mexico.

Currently, I’d estimate there are more than 1,500 tractor trailers or heavyweight vehicles in Mexico using vehicular natural gas for fuel, and that is a number that is continuing to grow.

NGI: You mentioned contamination in the major cities in Mexico. What sort of impact would a transition to vehicular natural gas have on the environment and air quality?

Bayona: In terms of the environment, natural gas presents a great opportunity as a transitional fuel that would also drive an ecological transition. This has to do with the chemical composition of natural gas. The use of vehicular natural gas is less contaminating to the environment and is historically cheaper to develop than fossil fuels such as oil, gasoline and diesel, so there’s also an economic benefit to its use as a vehicular fuel.

NGI: Your role also includes biogas and renewable natural gas. How large are those markets in Mexico and how do you perceive their growth potential?

Bayona: There is an incredible opportunity to develop renewable natural gas, RNG, in Mexico, though unfortunately, there is currently no real market for RNG in Mexico. There is very little awareness and very little knowledge about it, and in regards to national authorities, there is no real understanding of the market and its potential value.

There is a lack of understanding of the opportunity that renewable natural gas could represent for the country, and that is evidenced by the amount of flaring in Mexico that is contaminating and generates pollution. In Europe and the U.S., renewable natural gas and biogas are experiencing a boom, though here in Mexico it remains unknown, and there isn’t even any existing regulation related to it. I think there are excellent opportunities to develop biomethane via biogas, though, to date, there is some interest by investors, though almost no tangible development. It’s a big opportunity, but aside from a few isolated projects, it’s still a dormant market.

NGI: Regarding the vehicular natural gas used in Mexico currently, where does it come from? Is it largely imported, or is any of it produced here in Mexico?

Bayona: As is well known, 70-80% of the natural gas consumed in Mexico is imported from the U.S. There are more than 20 interconnecting pipelines between the U.S. and Mexico, and that is where the large majority of the natural gas is sourced from. Currently, Mexico has a complete dependency on the U.S. for natural gas, and I don’t see that changing any time in the future.

There is small production of liquefied natural gas in Manzanillo and a regasification plant in Ensenada in Baja California, so the amount of LNG that Mexico imports is going to decline, but in terms of natural gas dependency from the U.S., there’s really no way that dynamic will change for a long time. Even if Mexico were to begin to develop shale gas, it would take 10 or 20 years to really begin to reduce the dependency on the U.S.

NGI: With global fuel prices so high currently, how does that impact vehicular natural gas prices?

NGI: One final question: Regarding the recent request by Sener to require private companies to purchase natural gas from state-owned entities, how does that affect the market?