Mexico, the United States and Canada continue to work through their trade policy differences as the world’s energy supply becomes an increasing piece of geopolitical gamesmanship. 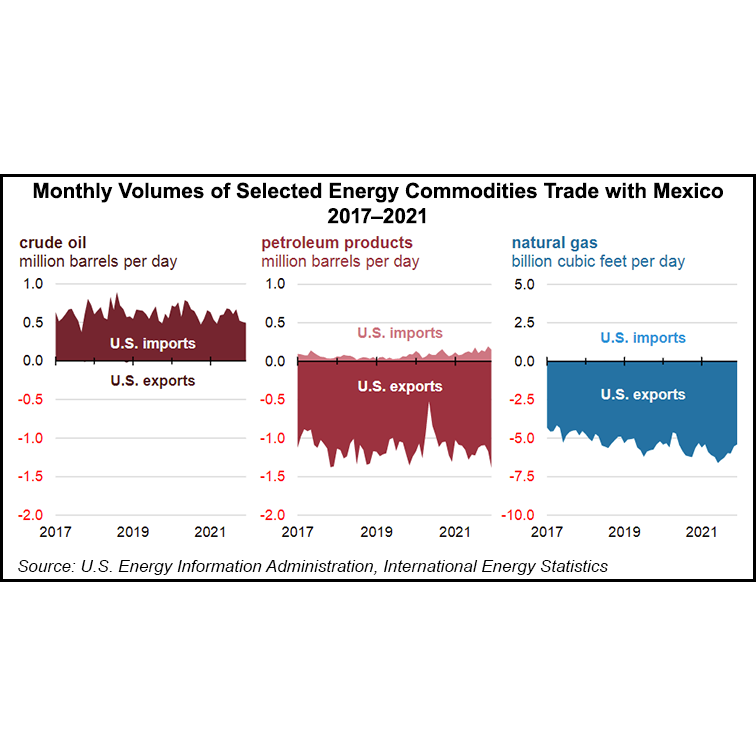 It has been 75 days since U.S. Trade Representative (USTR) Katherine Tai announced that her office was requesting dispute settlement consultations with Mexico centered around energy. Under rules of the United States-Mexico-Canada-Agreement, or USMCA, Tai can now call for establishing a dispute settlement panel to determine violations and potential penalties.

On Monday, however, Mexico’s Economy Ministry said that dialogue had been “productive” and would “continue with mutual efforts to get to a solution” that was satisfactory for all involved parties.

A USTR spokesperson told NGI’s Mexico GPI, “We hope to maintain this positive momentum to resolve these concerns raised by U.S. energy producers and to advance North American competitiveness.”

The complaints revolve around unfair treatment of U.S. and Canadian firms in the Mexican energy sector. These include a directive that Sistrangas pipeline users would have to source their gas from Mexican state firms. There are also objections to rules that grant Comisión Federal de Electricidad (CFE) priority in power generation, along with permitting problems that prevent international energy firms from operating freely in the country.

Before news of the extension in talks, Miriam Grunstein and Tony Payan of Rice University’s Baker Institute said a consultation panel would take about 300 days, prolonging the dispute well into 2023. “If no resolution is achieved, the plaintiffs can suspend trade benefits to the offender in such a way that is equivalent to the impact on the plaintiff’s investors,” they said. “This means that the U.S. and Canada, in effect, could impose tariffs on Mexican goods and services of their choice.”

The Rice experts said President Andrés López Obrador “appears unconcerned about not only the rights and needs of investors, but also his own commitment to free trade and the penalties that may befall Mexico.”

Analysts have also suggested that Mexico would lose its case should it get to a consultation process. “The fact that Canada joined the dispute against Mexico further legitimizes Washington’s position,” Grunstein and Payan said.

There has, however, been a noticeable change in tone recently as all parties work to support regional trade opportunities in light of the war in Europe and the general breakdown of supply chains post-pandemic.

Energy expert Carlos Flores told NGI’s Mexico GPI that “the most probable scenario that I see is that the consultations won’t arrive at the panel stage and that a middle ground is found in the negotiations process.” He said such an agreement would be one “in which the U.S. finds a way to recuperate part of what they’ve lost and where Mexico also emerges feeling as if they too won in the negotiations.”

Mexico and the United States are major trading partners in energy. The value of cross-border energy trade reached a nine-year high of $42 billion in 2021, according to the U.S. Energy Information Administration. Mexico, meanwhile, sources 80-90% of its natural gas needs on most days from north of the border.

The extension in talks coincides with news that President Biden has promised continued exports of natural gas by the United States to its trading partners.

There have been rumors, however, that the Biden administration might ban refined products exports in a bid to keep prices at the pumps in check. This would have direct ramifications for Mexico, and indeed, across Latin America.

In a letter addressed to U.S. Energy Secretary Jennifer Granholm, the American Petroleum Institute (API) said banning “or otherwise restricting exports of refined petroleum products could have immediate and severe impacts on our industry’s ability to reliably supply fuels in the United States, Europe, and especially Latin America.”

Latin America, including Mexico, is the primary market of U.S. refiners with exports totaling more than 1 million b/d.

API said, “If the U.S. were to retreat from our trade relationship and choke off energy supplies, Latin American countries would face a choice between fuel scarcity and destabilization or acquiring product from new sources, namely Russia or China.

“We also note that, with our enthusiastic support, the U.S. Trade Representative has requested consultations with Mexico over their treatment of U.S. energy companies. The U.S. should not undermine efforts to facilitate market access for U.S. energy, which is precisely what export restrictions would do.”