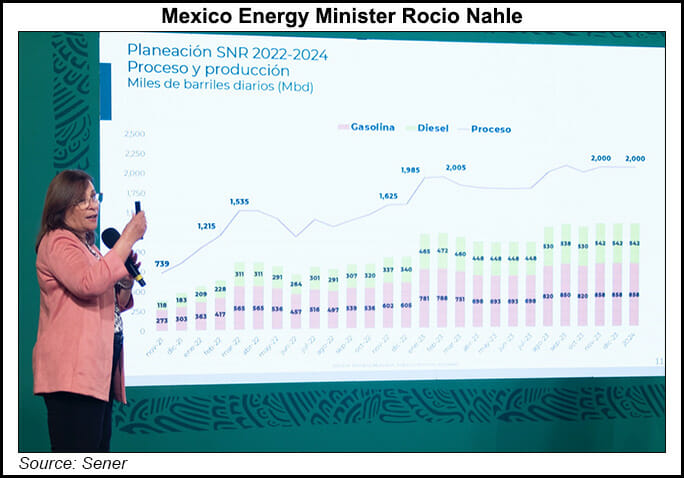 With a three-year plan focused heavily on the downstream, the two officials said Mexico was set to achieve the long-promised aim of self-sufficiency in refined crude. Driven by the construction of the 340,000 b/d Dos Bocas refinery in Tabasco, the addition of the 340,000 b/d Deer Park refinery in Texas, and 100,000 b/d of new refining capacity at the Cangrejera petrochemical complex in Veracruz, Mexico would be able to process all its crude in Pemex facilities in 2023, Nahle said.

The target is high compared to what the country is doing now. Pemex refineries processed 695,000 b/d of crude during the third quarter, with utilization of 42.4%, up five percentage points from the year-earlier period. Deer Park’s utilization rate has averaged above 80% in recent years, according to Pemex.

Natural gas, which normally plays second fiddle to oil in Mexico’s energy planning, was also mentioned during the press conference. Oropeza said the focus in the next three years would be on upgrades at the Nuevo Pemex and Cactus natural gas processing centers.

“We are going to carry out the maintenance and rehabilitation of these plants in order to increase their current processing capacity which will mean more dry gas, liquefied petroleum gas, ethane and naphtha,” he said.

The government also plans to restart exploration and production work at the Lakach deepwater gas field in the Gulf of Mexico. Lakach contains proved and probable resources, i.e. 2P reserves, of close to 1 Tcf. It was discovered in 2008 and saw development halted for budgetary reasons ahead of the 2013-2014 energy reform.

Oropeza said development would occur in an “association with private sector firms,” and Pemex “would be able to recoup not all but most of its initial investment.” Lakach was initially expected to produce 400 MMcf/d and is the only Pemex deepwater project “where wells were drilled,” the Pemex CEO said.

Other points in the energy plan include increasing Mexico’s production of fertilizers to meet about 49% of domestic needs by 2024. A fuel commercialization subsidiary also is set to be created.  In addition, there would be continued state help to pay back Pemex debt as well as new labor contracts for Pemex workers and “no layoffs,” López Obrador said.