The Mexican natural gas industry is developing several projects to reinforce the supply balance in the southeastern part of the country to take advantage of U.S. import capacity due to come onstream by the end of the year. 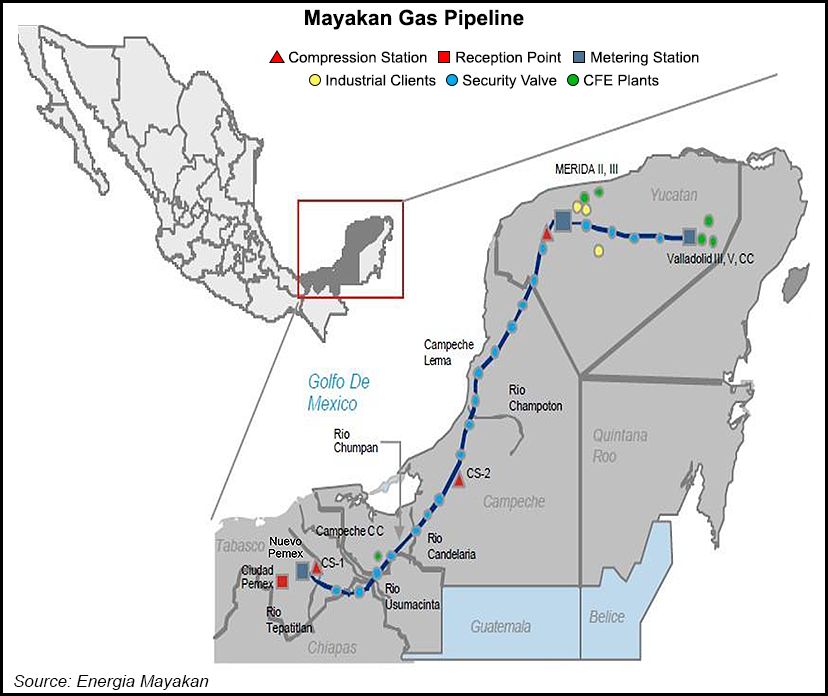 The Centro de Control del Gas Natural (Cenagas), the operator of the Sistrangas pipeline system, is involved in two projects in the region. The first is to renovate a compressor station in Veracruz to allow gas in central Mexico to move further south.

“We anticipate that the southeast will start receiving imported gas,” Cenagas’s Eduardo Prud’homme, head of the technical and planning unit, said on a conference call. “So we are working on reconfiguring our system so that the Cempoala compressor station is able to reverse the flows that currently go from the southern zone to the gulf zone” on the Sistrangas, which is Mexico’s largest gas transport network.

For the second project, Cenagas is evaluating an interconnection request from the privately owned Mayakan pipeline on the southern Yucatan peninsula. Sistrangas and Mayakan each receive gas from the Nuevo Pemex gas processing plant, one of three such facilities in the region, but they are not interconnected.

“The analogy would be that the processing plan acts like a hinge,” Prud’homme said. “What it does not inject into Sistrangas can then be sent to Mayakan. We are going to connect the two systems so that Mayakan can have more operational flexibility.”

The southeast, and in particular the Yucatan peninsula, suffers from recurring gas supply shortages. Imports from the United States do not reach the southeast pipelines, which are supplied mostly with associated gas from the oilfields off of the southern coast.

Output at the offshore fields, operated by Petroleos Mexicanos (Pemex), has been on the decline, and most of the gas injected into the region’s gas pipelines is shipped north to demand centers in central Mexico.

Both the Cempoala and Mayakan projects are intended to coincide with the expected December startup of the 2.6 Bcf/d Sur de Texas-Tuxpan undersea pipeline, which would move gas from the South Texas border to the port of Tuxpan in central Mexico.

The project, a joint venture between TransCanada Corp. and Infraestructura Energetica Nova, the Mexico unit of Sempra Energy, would free up supply in central Mexico and allow U.S. imports to flow further south. It is anchored by transport agreements with state power company Comision Federal de Electricidad (CFE) and also includes a 500 MMcf/d bidirectional interconnection to the Cactus-San Fernando pipeline on Sistrangas.

Separately, Pemex and CFE are developing another project to ease the gas shortages in the southeast, in this case with liquefied natural gas (LNG). At the end of last year, CFEnergia, the fuel marketing affiliate of CFE, said it was planning tenders to acquire LNG and use a rented floating storage regasification unit (FSRU) at the port of Pajaritos in Veracruz.

Gas delivered at Pajaritos would move into central Mexico, displacing gas from the southeast that could instead flow into the Yucatan peninsula. Cenagas is evaluating two possible interconnections related to the FSRU project, according to regulatory documents filed earlier this year.

The transport unit at Cenagas is conducting basic engineering studies for the Cempoala and Mayakan projects, according to Prud’homme.

The operator may eventually hold an open season for capacity on Sistrangas to move gas south, he added. Currently, the capacity allocated on that part of the system is for south-to-north flows, from the southern zone to the gulf zone on the Sistrangas.

“The routes from north-to-south currently don’t exist,” Prud’homme said. “We are going to work on the physical part, and on the commercial side we will have to determine a mechanism to assign that capacity.”

A subsidiary of France’s Engie SA operates the Mayakan pipeline. In service since 1999, it was one of the first private sector-led pipelines to come online after a partial liberalization of the Mexican energy sector in the mid-1990s. Engie completed an expansion project on the pipeline in 2016.

The 780-kilometer (485-mile) pipeline begins in Tabasco at the Nuevo Pemex plant and runs north through Chiapas and Campeche before terminating at the city of Valladolid, Yucatan, in the northern half of the peninsula.

Engie has proposed another expansion project, estimated to cost $300 million, to extend Mayakan into the state of Quintana Roo. Last year, the firm issued a call for expressions of interest to gauge transport demand in the peninsula, the first step in a tentative plan to hold an open season. If there is enough interest, Engie aims to put the 160-kilometer (99-mile) expansion in service by 2020.

The Mayakan pipeline is currently anchored by 243 MMcf/d transport contract with CFE to supply five combined-cycle power plants, which are the main consumers of gas in the Yucatan region. However, Spain-based Gas Natural Fenosa recently obtained permits to operate as a local gas distribution company on the peninsula.

Cenagas is evaluating two other interconnections with private pipelines in western Mexico that would allow U.S. gas imports from the Waha Hub in the Permian Basin to flow into the Sistrangas.

One would be at El Encino in the northwestern state of Chihuahua, with the La Laguna pipeline, which is slated for startup this year. The other is further south at Zapotlanejo, outside of Guadalajara, with the Villa de Reyes-Aguascalientes-Guadalajara pipeline, expected to begin service by October. Mexico City-based Fermaca is developing both projects.

“We’re talking with other pipelines as well,” Prud’homme said.

Cenagas is also studying a third interconnection project that would boost imports at the Texas border at Reynosa in northeast Mexico. The project entails building a 350 MMcf/d lateral from the cross-border pipelines in the area to the EstaciÃ³n 19 compressor station on the Sistrangas.

At Reynosa, the Sistrangas currently receives gas from the Kinder Morgan Border Pipeline in McAllen, TX, and with Tennessee Gas Pipeline in Hidalgo, TX.