Mexican energy regulators are putting together a package of natural gas regulatory reforms intended to facilitate the emergence of a secondary capacity market, as well as simplify pipeline open seasons. 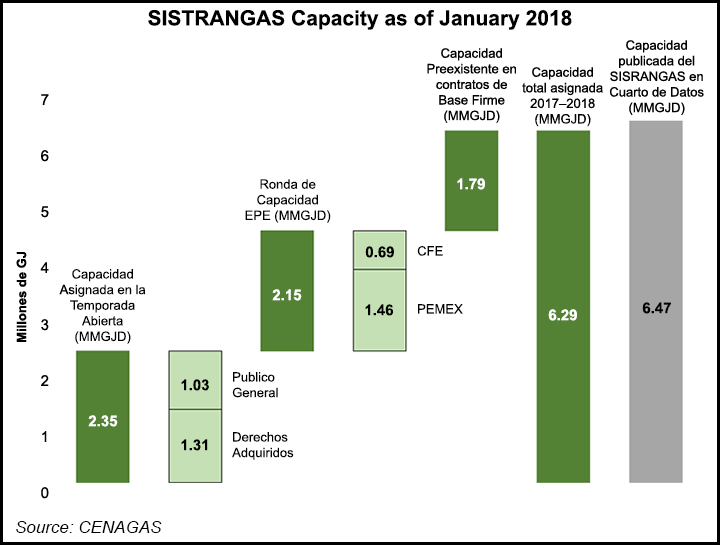 The Comision Reguladora de Energia (CRE) issued a draft in November that would modify the gas sector’s open access pipeline regulations, known as the DACG per the Spanish acronym. The proposal, which remains out for public comment, focuses on the DACG rules for open seasons and capacity releases.

“With the open seasons, it is the same mechanism but markedly simplified,” a CRE spokesperson told NGI’s Mexico GPI. “As for the secondary market, the proposal improves and refines the existing rules — for example, providing more clarity on the types of capacity releases and the responsibilities of users — but it also incorporates new elements that will contribute to the market’s competitive development.”

The proposed rule changes include a one-time approval from the CRE that would allow pipelines to hold multiple open seasons without needing the regulator to authorize each one, as is currently the case.

The revisions to the secondary market rules cover much more ground, including:

The CRE has also proposed a minimum utilization rate of 80% for firm capacity pipeline reservations. Per the current open access rules, it is mandatory for Mexican shippers to release unused capacity.

“Defining this would be very positive” for the market, JosÃ© MarÃ­a Lujambio told NGI’s Mexico GPI. He is energy practice director at U.S.-Mexico law firm Cacheaux, Cavazos & Newton LLP. “If there is no CRE rule for that, it’s left at the liberty of the terms and conditions of each permit holder. This rule will bring certainty to all players.”

The proposed minimum rate is a per quarter average. A shipper using 60% of its reserved firm capacity during a quarter could thus be required to place 20% into the secondary market, under the revised rules.

The CRE has yet to produce a final version of the revised DACG rules. The draft proposal has received comments from various market participants, most of them pipeline companies, including TransCanada Corp., Infraestructura Energetica Nova (IEnova) and Kinder Morgan Inc.

“Through the consultation process we have identified some areas for improvement that will add clarity on the regulatory modifications, but we have not detected any need for substantial changes in the goals of the proposal,” the CRE spokesperson said.

Mexican authorities began setting up the framework for a secondary capacity market in the gas sector not long after the 2013-2014 energy reforms began, although trading remains limited to date.

“Capacity release markets only work if there are parties who want that capacity, and that may not be quite the case until a more vibrant, liquid spot market emerges,” said NGI’s Patrick Rau, director of Strategy and Research. “One thing that would help as well is the development of independent exploration and production companies that produce meaningful quantities of gas in Mexico.”

CRE sees a market emerging “very soon.” The regulator first published the DACG open access regulations at the beginning of 2016, unbundling transportation from natural gas sales on pipelines. The DACG also include guidelines for pipeline EBBs and terms and conditions of service, as well as rules for storage operators.

Last year authorities rolled out a capacity reservation system in which private shippers were able to contract capacity on Mexico’s largest pipeline system, the Sistrangas. Those contracts entered into force in July.

Private shippers currently hold about 16% of the capacity available on the 6.4 Bcf/d Sistrangas, while the remainder is allocated among Mexico’s state energy giants, Petroleos Mexicanos (Pemex) and the Comision Federal de Electricidad (CFE), as well as independent power producers.

Some gaps remain in Mexican pipeline regulations, and they would need to be filled in as the gas market begins to see more trading of capacity rights. The DACG open access regulations, for example, do not apply to Sistrangas, which is an integrated system comprised of the national SNG pipeline system and six private pipelines.

The operator of Sistrangas, state-owned Centro Nacional de Control del Gas Natural (Cenagas), is still waiting for CRE to issue regulations for integrated pipelines, although it expects them to be similar to the existing rules.

“Our understanding, based on the CRE’s work calendar, is that the DACG for integrated systems will be ready around midyear,” said Cenagas’ Eduardo Prud’homme, head of the technical and planning unit. He recently discussed the DACG in a conference call. “With those in place we would have a more established framework for how we will assign capacity in the future.”

For now, Cenagas is following the existing regulations as closely as possible. The operator has also decided to allow shippers to renew theirexisting capacity contracts, which expire July 1, postponing a second Sistrangas open season until later this year at the earliest.

On the other hand, the revised DACG secondary market rules would apply to shippers with capacity on the privately owned pipelines being developed outside of Sistrangas.

Since 2012, Mexico has undertaken a historic buildout of its gas transport infrastructure, tendering projects to private developers in the northwest and central regions and along the northeast coast. Several of the pipelines came in service last year, while the remainder are expected to start up by early 2019.

State power company CFE is the anchor customer for the majority of these pipelines. The utility, through its marketing affiliate CFEnergia, is looking to commercialize the transportation capacity on these pipelines to third parties.