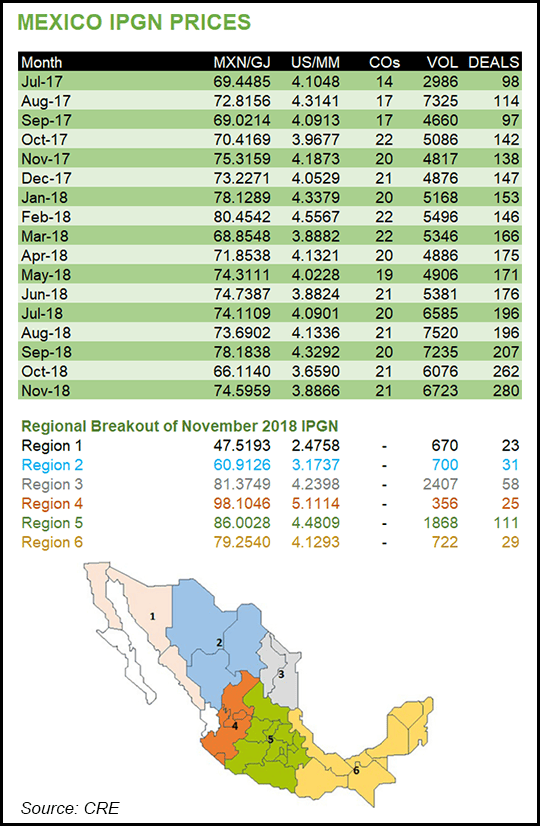 The number of transactions is the highest reported since CRE began publishing the IPGN in July 2017.

Transactions are priced using U.S. indexes, such as Henry Hub or Houston Ship Channel, plus the cost of transportation. Pipeline imports from the United States have quadrupled since 2004, and are expected to continue rising through at least 2020, according to the Energy Information Administration (EIA).

CRE intends to discontinue the IPGN and hand off the reins to third-party price-reporting agencies once the market attains sufficient liquidity for Mexico to develop its own indexes.

“For now, there simply aren’t enough fixed-price deals upon which to base indexes in Mexico,” said NGI’s Patrick Rau, director of strategy and research. “Several things need to happen to remedy that, in my opinion.

“The Mexico market needs to continue to advance the energy reform, which includes things like opening more pipeline capacity to marketers from the U.S. into Mexico, the continued evolution of electronic bulletin boards, capacity release, finishing the pipeline grid in Mexico, connecting private pipelines to the Cenagas system, and the willingness of end-users to do more fixed price deals.”

He added, “Having more independent producers within Mexico, and the presence of commercial storage facilities, would certainly help as well.”

Mexico’s dry gas output has “fallen 38% since 2012 because of declining reserves, a low price environment, and limited exploration and production of new wells,” EIA said earlier this month, a trend that portends continued dependence on imports and pricing linked to U.S. indexes.

President AndrÃ©s Manuel LÃ³pez Obrador has criticized the 2013 reform and pledged to ensure that Pemex and CFE are the protagonists of Mexico’s energy sector, as opposed to the private sector. CFE’s new CEO, Manuel Bartlett, a close ally of the president, has also questioned the logic of making CFE the anchor customer for gas pipelines built by the private sector since 2012.

For the upstream, LÃ³pez Obrador has suspended bid rounds for three years and instead pledged to reverse the oil and gas output decline by giving Pemex a bigger exploration and production (E&P) budget.

Government officials have not indicated whether initiatives to release pipeline capacity currently held by CFE and Pemex will continue, nor whether authorities will continue with the previous administration’s plan to add 45 Bcf of underground natural gas storage capacity by 2026.

Both LÃ³pez Obrador and Bartlett have made clear, however, that they oppose the idea of CFE — Mexico’s largest power generator and gas purchaser — purchasing fuel or electricity from the private sector, a philosophy at odds with the development of open natural gas and power markets.

“The creation of a market, both for natural gas and [liquid] fuels is very important…I would say it’s almost as important as producing fuels or producing gas, and almost nothing has been said about that,” consultant Luis Miguel Labardini, a partner at Mexico City-based energy consultancy Marcos y Asociados, told NGI’s Mexico GPI.

“I hope that doesn’t mean that everything is going to be stopped where it is…because we need a process of further liberalization for the market to be efficient.”

CRE’s ability to regulate and develop that market could be impeded by budget cuts proposed by LÃ³pez Obrador, which led to CRE laying off 60% of its workforce.

In a statement earlier this month, CRE called on Mexico’s lower congressional house to approve the necessary budgetary resources for Mexico’s energy regulators to effectively carry out their duties.

With limited global supplies and robust demand entering the peak winter season, Raymond James analysts this week boosted their already bullish natural gas price forecasts for this year and 2022. Analysts J.R. Weston and John Freeman said they raised their full-year 2021 Henry Hub average price forecast 6% to $3.70/MMBtu and their expectation for next…