Mexican imports of natural gas from the United States will increase at least 25% by 2024, according to a recent presentation by Commissioner HÃ©ctor Moreira of the country’s upstream regulator ComisiÃ³n Nacional de Hidrocarburos (CNH). 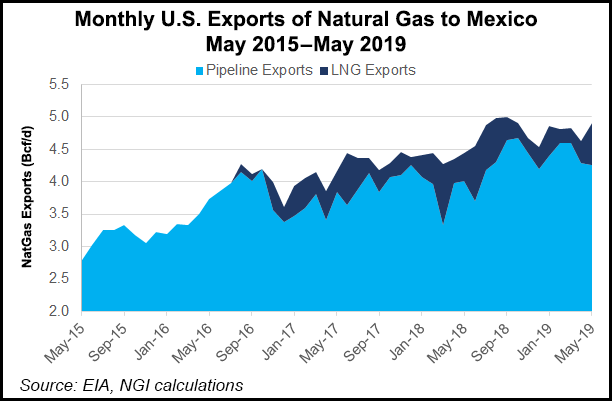 Natural gas exports to Mexico from the United States are forecast to reach more than 6.74 Bcf/d in 2024, 25.5% more than 2017 levels of 5.37 Bcf/d, according to estimates from the country’s Energy Ministry presented by Moreira. During the same period, Mexico natural gas production is forecast to increase only 6.6% to 4.08 Bcf/d by 2024, compared to 3.83 Bcf/d in 2017, according to the presentation.

Today, one-half of domestic production is used by state oil firm PetrÃ³leos Mexicanos (Pemex) for its operations and for pressure at fields.

At least 81% of local demand is forecast to be imported by 2024. Currently, 94% of Mexico’s natural gas imports come from the United States, the highest percentage dependency in the world from one country.

In Moreira’s presentation, which he gave to the country’s senate and titled “Natural Gas and National Security: A Challenge for Mexico,” the CNH Commissioner and former Pemex board member highlighted that Mexico only has two days’ worth of natural gas storage available, which leaves the country vulnerable to potential electricity outages or shortages.

The director of pipeline system operator Cenagas, Elvira Daniel Kabbaz, said last week that Cenagas will continue the previous government’s natural gas storage policy. The goal is to have 10 Bcf of storage capacity by 2021, and 30 Bcf by 2024, Daniel said.

“Natural gas has allowed the Mexican economy to become more competitive,” Medina said. “There was a time period of ”critical alerts’ when industrial companies had to reduce their activity because there wasn’t sufficient capacity of natural gas and they had to pay extremely high prices for LNG [liquified natural gas]. Natural gas is vital for Mexico.”

Natural gas consumption has increased 32% in the last 12 years, dating back to 2007, according to the CNH. In that time, the gap between national production and demand has widened to more than 5.4 Bcf/d, requiring a hefty increase in imports. Current demand for natural gas is more than 8 Bcf/d, with Cenagas forecasting that to increase to 14.5 Bcf/d by 2024.

To increase production and reduce dependency on imports for natural gas, the CNH recommends more bidding rounds to allow for private companies to invest, explore and produce hydrocarbons, additional joint ventures with Pemex to boost production, and the allocation of financial resources by Pemex to develop priority fields.

But Pemex’s 2019-2023 business plan, released in July, did not include joint-venture partnerships with other operators in the upstream segment.

Before the plan’s publication, LÃ³pez Obrador suspended bid rounds, farmout tenders for stakes in Pemex acreage, and the migration of oilfield services (OFS) contracts to exploration and extraction contracts.

“The principal obstacles in the sector are uncertainty and the lack of a long-term vision,” Medina said. “It seems that investors don’t know how to read the signals of the government and that puts them in an uncomfortable position given the macroeconomic environment and amount of worldwide competition for capital.”

But there was some good news for the natural gas sector in August. Private companies and investors in Mexico’s natural gas industry welcomed the August 27 announcement by President AndrÃ©s Manuel LÃ³pez Obrador that pipeline contract disputes had been resolved between the ComisiÃ³n Federal de Electricidad (CFE) and private companies after months of negotiations, clearing the way for more imports from the United States.

The cross-border marine pipeline, which will have capacity of 2.6 Bcf/d and send natural gas from the south of Texas to the Tuxpan port, will enter into operation next week, according to LÃ³pez Obrador.

“The south Texas-Tuxpan pipeline is key for the supply of gas to Mexico,” Medina said. “Mexico can’t afford to close its doors to the cheapest gas in the hemisphere.”