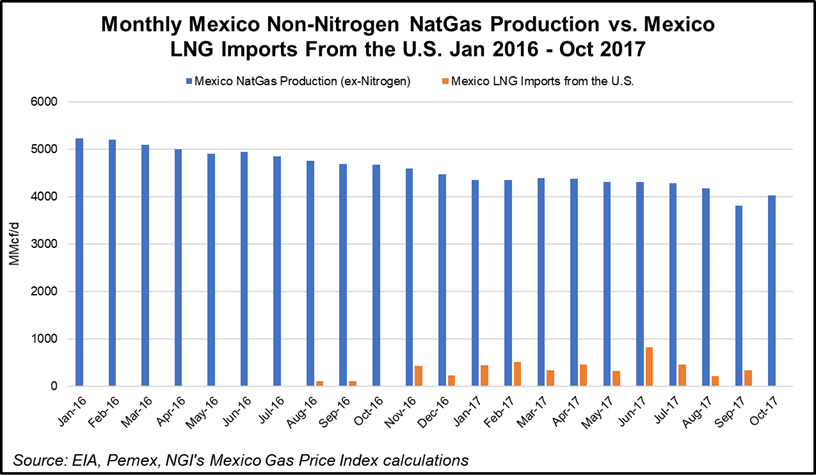 The LNG is required because of delays in Mexico’s ambitious program to expand infrastructure to handle fast-growing imports by pipeline from the United States.

The LNG tenders are to be announced within two weeks to supply not only CFE but also state-owned Petroleos Mexicanos (Pemex), he said.

“The first process is for the acquisition of physical LNG to be delivered into the port of Pajaritos in Coatzacoalcos,” Turrent told NGI. Coatzacoalcos is in the southern Gulf of Mexico state of Veracruz.

“This will be a three-four year purchase” for about 2.5 million metric tons/year (mmty) of LNG. “This purchase will be 50% for Pemex’s needs and 50% for CFE needs. An extra 2 mmty will be purchased on a quarterly basis as needed,” he added.

The second tender would be to rent a floating storage regasification unit (FSRU) and to construct and operate a 14-kilometer (8.7-mile) pipeline that would be connected to the main natural gas pipeline grid.

The FSRU rental “is expected to be for a term of three to five years,” Turrent said.

“Once gas is available, it will move into the middle of the country and will displace gas from southeast, which will instead supply gas to Yucatan” on the southern peninsula, he added.
Transparencia Mexicana, the Mexican arm of Transparency International, is to supervise both tenders, according to Turrent.

Mexico has three LNG terminals now in operation. The Altamira LNG facility is on the Gulf Coast, while Manzanillo is sited on the central Pacific, and Energia Costa Azul is near Ensenada in Baja California. Two of the LNG facilities — Altamira and Manzanillo — were running at about 80% of their capacity in late November.