Mexico is gearing up to auction emerging unconventional resources through Round 2.5, and while oil is a top priority for prospectors, the country also wants to encourage more natural gas development, a top official said Monday. 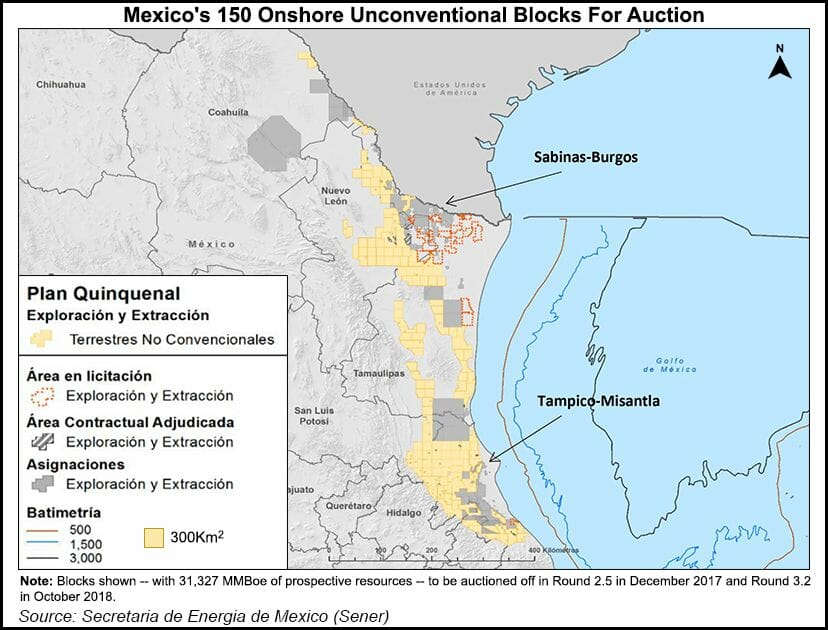 On the opening day of the LDC Gas Forum’s U.S.-Mexico Natural Gas Forum in San Antonio, Hector Moreira Rodriguez of the National Hydrocarbons Commission (CNH) provided more details about Round 2.5, an auction of “nonconventional resources.”

“Mexico has important unconventional hydrocarbon resources, and we are in a privileged position to start developing them,” Moreira said. “We have the resources but we have not exploited them.”

Round 2.5 would be the fifth bidding in the second round. Twenty-five onshore areas were assigned in July potentially holding “a lot of gas,” Moreira said. “The plan will be announced in the coming months, with the opening of bids planned in early 2018…This is nonconventional, the first time such areas have been offered.”

Mexico again would be looking for license agreements with private exploration and production (E&P) companies, not production sharing or profit sharing agreements. A “long evaluation phase” is planned to develop the shale and tight resources, with agreements “as flexible as possible” to ensure development.

One way to encourage investment in the shale and tight resources would be through an attractive fiscal model, Moreira said. Also, regulations have to incorporate the lessons learned as Mexico moves toward “international standards of regulation, more similar to the United States and Canada.”

The model won’t be ready overnight, nor will development ramp up quickly.
“We still have to do three major things,” Moreira said. “I can’t tell you it’s ready, that it’s hunky dory. It’s not.”

Mexico experts are uncertain how much shale and tight gas the country actually has.
“Nobody really knows,” he said. The U.S. Energy Information Administration has estimated Mexico may have round 545 Tcf of gas and 13 billion bbl of oil. CNH has calculated a “smaller amount of natural gas and a higher amount of oil,” but a large percentage of the estimated resources are in northeastern Mexico. The country also has vast areas that haven’t been tested.

Asked how fast Mexico may be able to expand its gas business, Moreira said it won’t be in a year — or even in five.

“It will not take a couple of years…How long will it take to go from 1 Bcf, to 2 Bcf to 3 Bcf? I see it in 10 years. It’s not that easy. We have a lot of areas to complete to develop 4 Bcf/d…It’s not going to happen tomorrow or the year after, but it will come. July bidding was very successful and we are seeing interest that was not there before.”

Mexico remains challenged in understanding the “quality and the knowledge” of its shale and tight resource geology. As well, the country lacks a broad regulatory framework.

In addition, “economic and commercial conditions” have to be in place as Mexico still lacks an established oilfield service industry. Oil and gas prices also have to be strong enough to encourage investors to take part.

“Another thing we have to consider is that free market prices are beginning next year,” Moreira said. “When prices were fixed, we could negotiate. Now negotiations are about how to protect prices” and ensure there is enough to back the available capital.

It’s an effort worthy of pursuit, Moreira said. The country need look no further than to the U.S. onshore to comprehend the vast potential Mexico may hold in its shale and tight resources

The Eagle Ford extends into Mexico, and other Texas formations likely extend as well.

“To the border we have the Eagle Ford, which is producing quite a lot, and the Permian, which is producing even better. These two areas being developed in the U.S. we see as extremely productive. The question is, do they extend into Mexico? It would be funny if they didn’t, if they stopped at the border.

“What we see is that the Eagle Ford extends into Northeast Mexico, and we have two more formations similar to the Eagle Ford all the way to Veracruz. It’s a huge area that must have quite a bit of nonconventional resources.”

Some geologists question how far south the underlying Permian formations extend. For example, Chihuahua is “straight south of the Permian,” and it may hold extensive reserves. Mexico is currently relying more on U.S. pipeline imports and liquefied natural gas (LNG) imports from Central America to feed gas demand, even though the country may rank No. 6 worldwide for shale gas reserves, Moreira said.

“Mexico needs more and more gas…It’s surprising — or deplorable — that a nation with such resources has to import LNG from Peru, importing LNG gas at quite a high price. Why? Because consumption is far more than we expected…”

Mexico’s initial auctions mostly drew on keen interest in exploring the offshore, and the number of offshore rigs working in the country reached a 10-year high in June. However, during July, in the second and third auctions of Round Two, gas-rich blocks dominated the action.

A move toward building Mexico’s gas reserves could not come too soon, Moreira said. Production from the country’s principal gas basins — Burgos, Sabinas, Burro-Picachos and Veracruz — is at a 15-year low. As of April, Mexico was importing 81% of the gas it consumes, most via pipeline from the United States.

Most E&Ps are in the hunt for oil, but Moreira said gas resources deserve their due. He thinks oil and gas exploration should be separated, each with individual incentives to encourage prospecting.

“We have the resources. We have not exploited them. We just have produced the oil in the ground and not brought the gas out.”

Mexico has to develop a “shale industry, which does not exist in Mexico,” Moreira said. “We don’t have the supply, the equipment, the lines, the technicians. We have to deal with all of that. But fortunately, the learning has already been done across the border.”

The five-year plan to 2015-2019 includes assigning more areas for bidding.

“We will add nominations to the five-year plan,” he said. An evaluation is to be held three months before the announcement of each bid to determine what to include in the tenders. “What is happening now is that we announce the bidding process and companies can nominate areas. They have the information and they want to add areas.”