Mexico’s natural gas pipeline contracts — criticized for months by President AndrÃ©s Manuel LÃ³pez Obrador as abusive and one-sided — have, in the span of days, become a government talking point to demonstrate a warming to private and foreign investment in the energy industry. 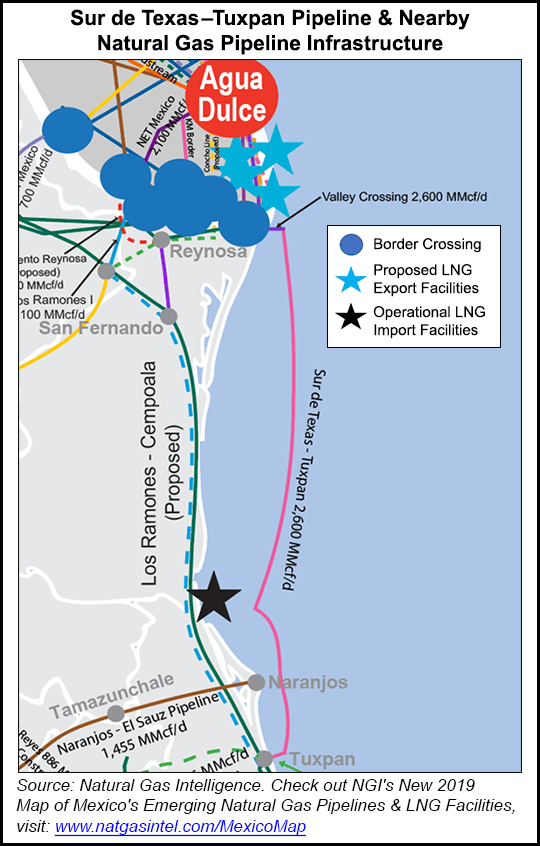 The shift in rhetoric from LÃ³pez Obrador and his administration has members of the business sector hopeful for an improved relationship between private energy interests and the current government, Lourdes Melgar, the country’s deputy energy minister from 2014-2016, told NGI’s Mexico GPI.

During his First Government Address or Informe de Gobierno, akin to a State of the Union speech, LÃ³pez Obrador celebrated last week’s renegotiated terms of the natural gas pipeline contracts and thanked private companies and business leaders for their cooperation in the process. On Aug. 27, after months of negotiations, Mexican state utility ComisiÃ³n Federal de Electricidad (CFE) reached a deal with TC Energy Corp, Infraestructura EnergÃ©tica Nova (IEnova) and Grupo Carso, whose billionaire CEO Carlos Slim was instrumental to brokering the truce.

Since entering office in December, LÃ³pez Obrador criticized the natural gas pipeline contracts signed during the previous administration as damaging to Mexico, repeatedly calling them unfair. His grievances with the contracts were echoed by CFE’s CEO Manuel Bartlett, who has been highly critical of executives at foreign and national pipeline firms.

Since the announcement of the renegotiated terms, however, the government has changed tune.

“We have to thank the will of the business leaders to arrive at this agreement through dialogue, putting national interest first while considering the interests of the companies as well,” LÃ³pez Obrador said during his Aug. 27 press conference to announce the deal. “Many thanks to the directors, men and women that manage the companies that constructed these natural gas pipelines.”

In his address on Sept. 1, the president reiterated that private investment is necessary for development in the energy sector and for the supply of natural gas to the country.

Another indication of a possible shift in stance came from Energy Minister RocÃ­o Nahle. On Aug. 29, Nahle tweeted a photo of herself with Slim and wrote that they had “a very productive and technical meeting” about the “vision of the energy policy designed in the government.” She added that the two completely agree upon continuing to add value to the energy sector to advance development opportunities.

“When the agreement of the pipelines was reached, what we saw is that the group within the administration that has a more pro-business position or more pro-energy reform position won over those that are more nationalistic or orthodox,” Melgar said. “That’s an important message to send.”

She also mentioned LÃ³pez Obrador’s Aug. 28 meeting with Claudio Descalzi, CEO of Italian oil producer Eni SpA, as an additional representation of the government’s efforts to placate international energy participants and demonstrate a willingness to work together.

“I think the president is beginning to listen to other people,” Melgar said. “The fact that he met and had a picture taken with the CEO of Eni, that’s more than just a picture, there was a conversation there. I’m sure he’s having conversations with other business people” who want to help him and see the energy sector succeed, she said.

The pipeline contract renegotiations were seen as credit positive for CFE and private natural gas companies, according to a report by rating agency Moody’s Investor Service.

Despite the positive outcome, the country still suffered reputational blemishes with investors during the negotiations that will take time to repair, Pablo ZÃ¡rate, managing director of the Strategic Communications Division of FTI Consulting in Mexico, told NGI’s Mexico GPI. The long negotiation process triggered “anxieties among the international investment community that are difficult to fully assuage over time,” ZÃ¡rate said.

He added that Mexico needs to work to send a clear, consistent message to investors to rectify any harm to credibility as a result of the natural gas contract renegotiations.

“We are paying a price in terms of confidence in Mexico as an investment place and in terms of how much the Mexican government is really going to respect existing contracts,” she said. “I think we paid a price in our relationship with the United States and in particular with the state of Texas. Fortunately, we will be able to move on, I think. And I hope.”