Natural gas production in Mexico totaled 3.87 Bcf/d in June, up from 3.59 Bcf/d in June 2020, according to the latest data from upstream regulator Comisión Nacional de Hidrocarburos (CNH). 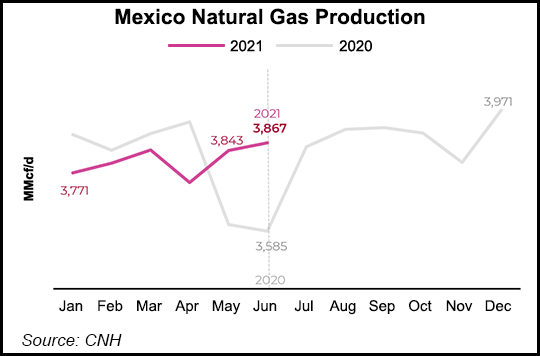 The figure was also up compared to May, when Mexico produced 3.84 Bcf/d.

While production is showing a slight uptick, Mexican imports of natural gas from the United States are reaching record levels, adding upward pressure to surging U.S. benchmark gas prices. Also increasing is flared gas at Pemex, impacting the amount of gas that makes it to market.

As revealed in its recently released 2021-2025 business plan, Pemex is forecasting a base-case scenario increase of natural gas production to 4.19 Bcf/d this year from 3.64 Bcf/d realized in 2020.

The production ramp-up relies heavily on new fields, including Ixachi and Quesqui, Pemex said. The two fields are part of what Pemex executives deem “priority” areas, where development has picked up this year but overall has been slower than advertised.

In June, gas-rich Ixachi in Veracruz state was the third-largest producing field in Mexico, with output of 201 MMcf/d. This was up from 70 MMcf/d in the same month a year ago. Nearby Quesqui produced 196 MMcf/d in June, up from 29 MMcf/d in June 2020.

The offshore Maloob field in the Gulf of Mexico was the biggest producing natural gas asset in Mexico in June at 312 MMcf/d. This was up from 220 MMcf/d in the year-ago month. Maloob is part of the Ku, Maloob and Zaap (KMZ) megafield, Mexico’s main hydrocarbons producing area and home to the brief, raging offshore fire that made international headlines earlier this month.

Although Pemex has managed to slow the decline in production under the current government, it has not recorded a year/year increase in natural gas output since 2009, when full-year average production peaked at 6.53 Bcf/d.

Meanwhile, analysts have said Pemex is poorly positioned to take advantage of higher commodities prices, in particular as it relates to exporting crude oil. Mexico’s oil production averaged 1.68 million b/d in June, up from 1.62 million b/d a year ago, but flat compared to May.

Mexican private sector hydrocarbons organization Amexhi, meanwhile, said this week that 2020 was the most fruitful year for its members in terms of oil and gas finds. Six contracts yielded discoveries worth 505 million boe, it said.