The first of three upstream auctions so far announced in Round Three of Mexico’s 2013-14 energy reform is to be held on Tuesday, featuring areas believed to have a high proportion of natural gas. 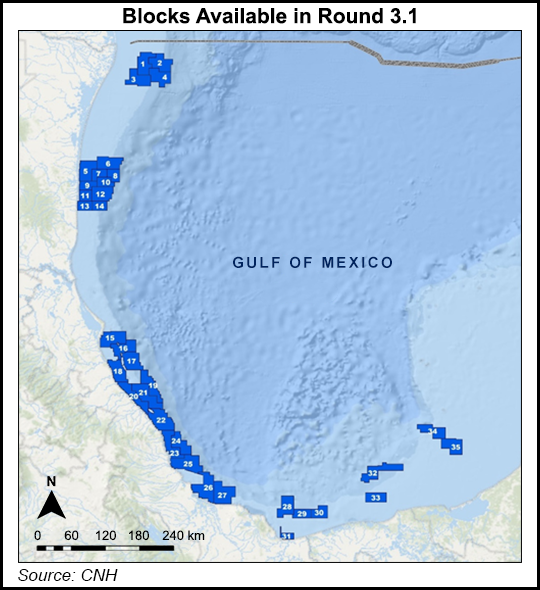 Round 3.1 offers 35 blocks under production-sharing contracts in shallow waters of the southern Gulf of Mexico.

The blocks are divided into three sectors: the Burgos Basin’s paleochannel (blocks 1-14); the Tampico-Misantla and Veracruz basins (blocks 15-27), and the southeastern basins (blocks 28-35).

Offshore blocks in Burgos, Mexico’s leading producer of non-associated natural gas, have never before been on offer under the reform. State-owned Petroleos Mexicanos (Pemex) did some exploratory offshore development in Burgos decades ago, but without success.

The government expects Round 3.1 to attract about $3.8 billion of foreign investment, in addition to the $153 billion of Rounds One and Two. The prospective resources on offer are said to contain 9.87 billion boe in resources.

In the last auction, the fourth of Round Two, Royal Dutch Shell plc was awarded nine of 29 blocks, thus making it one of the favorites for 3.1. Shell also is one of the leading producers in the U.S. Gulf of Mexico. However, there is expected to be strong competition.

Twenty-one companies are authorized to take part in the auction, and they represent 14 nations.

At a Friday session of the Mexican regulator, the National Hydrocarbons Commission (CNH), the nation’s proven (1P) reserves were confirmed as 8.484 billion boe, including 6.464 billion bbl of crude and 10.002 Tcf of natural gas.

The updated 1P reserves incorporated several discoveries by Pemex and one each by Eni and Hokchi Energy. The reserves added by the two private operators were in shallow water blocks awarded during 2015 for Round 1.2, which offered offshore acreage with previously discovered fields.

“This is the first time in the country that operators other than Pemex came to the commission and presented us with reserve figures certified by a third party,” CNH commissioner Sergio Pimentel Vargas said during the session.

Applications, meanwhile, have seen an unenthusiastic response by the international oil and gas industry for the second auction, Round 3.2, of the upstream series launched by the 2013-14 energy reform. However, it is still early days as bids open on July 25.

The invitation for Round 3.3, the third auction in the third round, was published earlier this month in El Diario Oficial, the Mexican equivalent of the Federal Register. Access to the data room opened on March 5. Presentation and the opening of bids is due Sept. 5.