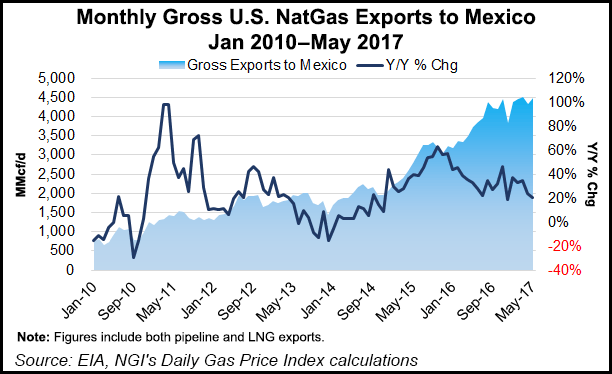 The Burgos Basin is the largest producer of non-associated gas. The basin is south of Texas in the northeastern states of Tamaulipas and Nuevo LeÃ³n. Sabinas lies nearby in Coahuila state, as does the Burro-Picacho platform. The Veracruz Basin is in the southern Gulf state of Veracruz.

In June, Mexico produced 5.253 Bcf/d of natural gas, of which 1.030 Bcf/d was non-associated. The figure for non-associated gas was the lowest recorded since 2002, and 57% less than in 2007, industry regulatory CNH reported.

PEP said July production in the Burgos Basin was 0.704 Bcf/d, almost exactly the same average as in the first six months of the year, but also almost exactly one-half of its output a decade ago.

The July figures also showed that, at 1.986 million b/d, Pemex is below the psychological barrier of 2 million b/d for the first time since 1981, with the exception of one month in 1995 when production was severely interrupted by storms. Mexico’s crude output peaked at just under 3.4 million b/d in 2004.

Drilling in the non-associated gas basins has fallen steadily since 2006 and to date this year, not one well has been drilled. The CNH said the decline is related to the 55% plummet in gas prices over the last decade.

Thus far, gas production by the private sector is negligible, amounting to 41 MMcf/d in June.

In April, Mexico imported 81% of the gas it consumes, most via pipeline from the United States, according to CNH. Previously, senior officials had used a ballpark figure of about two-thirds for imports.

Gas pipeline trade to Mexico from the United States continues to escalate, according to the U.S. Energy Information Administration. Mexico gas exports reached near-record levels through May, averaging 4.04 Bcf/d, compared to an average 3.78 Bcf/d for full-year 2016, EIA said. Mexican exports have been increasing since 2010, when pipeline exports across the southern border averaged 0.91 Bcf/d.

A senior CNH statistician explained that the new gas figures include production by Mexico’s state-owned Petroleos Mexicanos (Pemex), minus consumption by Pemex for use at its petrochemical plants and other purposes, “but is not subject to market prices for market forces.”

What remains, said the CNH statistician, amounts to the size of demand in the Mexican market, and 81% of it is now being satisfied by imports.

A turnaround for Mexico’s gas production may be on the horizon. In early July, Mexico held a natural gas-heavy Round 2.2 lease auction, where seven of the 10 exploration blocks found bidders in what one analyst called “aggressive” action. Round 2.2 was historic as it marked the first upstream auction featuring natural gas since Mexico’s 2014 energy reform.

In view of the current low prices for gas, several analysts had predicted that Round 2.2 might be a snoozefest, but the actual auction included fierce bidding on some of the blocks. “Holy wow!” GMEC’s Gonzalo Monroy, director of the Mexico City-based consultancy, tweeted at the time. “Round 2.2 proves to be quite a success.”

Not only that, a Canadian-Mexican consortium was the big winner. Sun God Energia, a unit of Canada’s Sun God Resources, together with Mexico’s Jaguar E&P, won six of the seven blocks that were taken. All but one of the seven blocks taken in the auction were in the gassy Burgos.