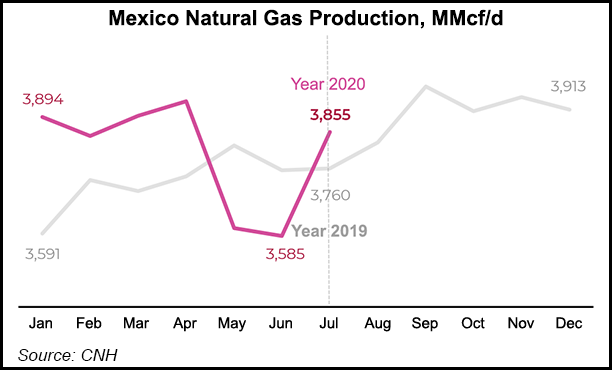 Mexico needs to work towards developing its vast natural gas resources as it pivots to building an energy matrix around gas and renewables, according to a series of industry panelists who spoke virtually Tuesday at the Mexico Gas Summit.

“We depend on natural gas. If we are going to compete internationally, we need to have readily available gas,” said Héctor Moreira Rodríguez, Commissioner at Comisión Nacional de Hidrocarburos (CNH). He added that Mexico has 224 Tcf of prospective resources, “enough gas for 100 years.”

According to CNH information, Mexico is projected to increase natural gas production by 50% in 2027, reaching a plateau of 5.5 Bcf/d, “but that’s not nearly enough,” Moreira said.

As it stands, Mexico’s demand for natural gas exceeds 10 Bcf/d, with imports from the United States accounting for about 70% of the total when consumption by state giant Petróleos Mexicanos (Pemex) is excluded from the figure, according to CNH.

CNH is in charge of upstream permitting in Mexico along with providing a database of sector information.

According to CNH, 58% of Mexican power generation is natural gas-fired, with natural gas accounting for most petrochemical output in the country.

“The world is changing its fuel use and we are moving to a world of natural gas and renewables,” Moreira said.

Rogelio Montemayor, president of the Energy Cluster of Coahuila, said investment in the energy sector could help Mexico out of the economic crisis caused by the coronavirus.

“We are facing a great paradox,” he said. “In terms of gas, there is no option to replace our gas imports. We face an enormous vulnerability there. We don’t have storage options. We are subject to an incident that could put us in a very vulnerable situation.

“On the other hand, there is an urgency to get new investments, due to the economic crisis,” he added. “And one of those sectors that could help Mexico get out of this rapidly is the energy sector.”

Montemayor said the current government’s cancellation of oil and gas rounds and farmouts, along with renewable energy auctions, limit the scope of new investment, but “I am confident that this will change because reality will make the government revise its policy.”

He said that new infrastructure was needed near the U.S. border in Coahuila and “we could develop a program to use the services on the other side of the border. We could be very competitive.”

Some 70% of higher upstream costs in Mexico lie in regulatory issues, Montemayor said, “which has a solution.” He said that the import of dry gas stripped of other components that could be used in petrochemicals also made imports less cost-effective than they seemed.

Meanwhile, private sector operators who secured licenses during the previous administration said they were finding success in natural gas in Mexico.

Warren Levy, the CEO of Jaguar E&P, said his company has drilled four successful wells this year, and it plans to drill more than 25 wells next year. Jaguar has the largest acreage position onshore of all private exploration and production (E&P) companies in Mexico.

“There is undoubtedly a preference to buy local gas in Mexico,” he said. He said his company expects “world class discoveries” in the next year to 18 months.

Jaguar is sitting on 13 Tcf of gas potential, Levy said, and “one Tcf can replace nine months of imports.” He said that the company is second behind Pemex in requesting permits from CNH.

Ricardo Ferreiro, country head at Tecpetrol México, said his company is “being creative” and “very lean” to compete with low natural gas prices.

He said with the right planning, partners, focus, and contract model, E&P companies can be successful in Mexico.

One problem is that although hydraulic fracturing (fracking) is technically legal, the government in Mexico City is against it. Most of Mexico’s natural gas resources are unconventional.

“You have the basins, the resources, the experience, but right now you need the green light,” Ferreiro said. “For sure production could pick up quickly.”