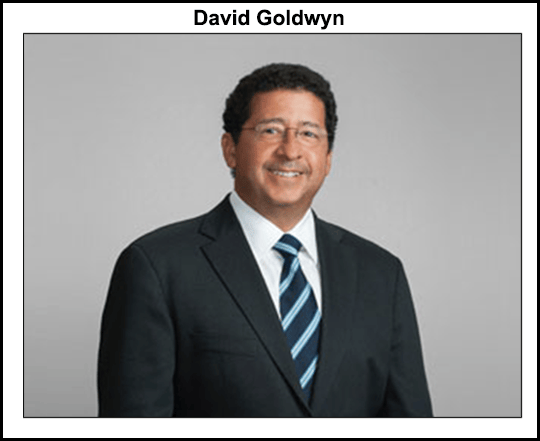 “I think the first thing you need is a fiscal framework which compensates people for building and having storage. And so that means you’ve got to either pay for the storage or you’ve got to let them earn market returns for when that storage is drawn on.”

Goldwyn is president of Goldwyn Global Strategies LLC (GGS), an international energy advisory consultancy and chairman of the Atlantic Council Global Energy Center’s Energy Advisory Board. He is a globally recognized thought leader, educator and policy innovator in energy security and extractive industry transparency. Goldwyn served as the U.S. State Department’s special envoy and coordinator for international energy affairs from 2009 to 2011 and assistant secretary of energy for international affairs (1999-2001), the only person to hold both the U.S. government’s international energy leadership positions.

Goldwyn: I think the first thing you need is a fiscal framework, which compensates people for building and having storage. And so that means you’ve got to either pay for the storage or you’ve got to let them earn market returns for when that storage is drawn on. So that compensates them for the cost of building the storage if you want to have it in private hands. There’s probably no reason for Mexico to pay for, own and manage its own gas storage. If the Comisión Federal de Electricidad (CFE) wants to do that, it could, it just needs to find the money, which it doesn’t have, which is why it doesn’t do it.

So, they need to create the right fiscal framework and create incentive to do it, and I am sure that the gas suppliers or frankly, the gas consumers in Mexico, would find a way to finance that.

NGI: Mexico currently imports about 70-80% of its needs in the US. Do you see this dependence increasing in the next few years?

Goldwyn: In a word, yes. I think Mexico’s dependence on imported gas will grow because demand will grow, because the gas is cheap, because the infrastructure has been built, because contracts are in force for that supply and because there’s no prospect of increasing the domestic supply of natural gas. And there’s no reason for increasing the domestic supply of natural gas essentially because of the fracking ban for Mexico’s vast shale reserves, which kind of mirror the Woodford [Oklahoma shale play]. And they’re unlikely to get offshore gas unless some of these fields turn up gas instead of oil, which is not what a lot of the prospectors are looking for. So, in the next five to eight years, there’s virtually no prospect of increased domestic supply, so I think imports will grow.

NGI: What could Mexico do to become eventually less reliant on the United States for its energy needs?

Goldwyn: It’s an interesting question because there’s actually a completely different strategy available to Mexico that would help it achieve the autonomy that the president wants and would also achieve the objectives of stabilizing the finances of Petróleos Mexicanos (Pemex) and CFE.

In my view, and this is just a personal view, the first step would be to embrace electric vehicles. I say that because first, Mexico could be a place [where] electric vehicles are manufactured given its car manufacturing base and there will be a strong North American demand for that. But electric vehicles would also reduce Mexico’s dependence on petroleum products and gasoline. And, as I’ve learned, Pemex’s upstream operations are actually reasonably profitable, in some cases quite profitable. It’s Mexico’s downstream operations which are bankrupting the company.

So, you can solve that problem and you can justify reducing the level of investment Pemex needs to make in the downstream area by moving to electric vehicles. You would basically save Pemex, reduce dependence and probably reduce emissions all at the same time, as well as driving the vehicles that you make in your own country.

I think that’s a big step, but that requires increased electrification, which would be the second step. That would include expanding transmission, as Mexico has at times planned to do — including high voltage direct current transmission — so that they can wheel that electricity to all the consumers that need to charge their cars.

The third step is to ensure that electricity is affordable. You also want it to be low carbon and, if you don’t want to depend on your own gas or anybody else’s gas, it needs to be renewable. So that means there is a need to revive those solar and wind auctions and [increase] the demand. The fourth step is fixing the capacity market in Mexico so you can high grade renewable power but compensate CFE for the remainder of gas fired power and for maintaining the reserve capacity you need to address intermittency and grid stability.

There’ll be some areas where natural gas will be necessary for fertilizer and cement and all that high temperature heat, and that’s a case where maybe Mexico can import that gas and go into the hydrogen business. That’s pretty costly right now, but that would be a way for them to do it.

So, if you look at that, you can essentially redirect Pemex’s finances and CFE could focus on its transmission and distribution business, which is a very profitable line of business for CFE. It’s probably the most profitable part. They have residential business, which is a loss that the Finance Ministry partially compensates for. Generation is modestly profitable but now it faces these new challenges. CFE could focus its capital allocation on transmission, help its finances, lower carbon and reduce dependence. So, if I had the magic wand, that’s what I do.

NGI: Some companies have announced plans to shutter operations and cease investment in Mexico. Do you think that there could be more companies shuttering operations or looking elsewhere given all the changes we’ve seen in the sector recently?

Goldwyn: I think it’s early to tell whether the big companies are going to leave Mexico. They certainly don’t want to. Energy investors tend to be long-term investors when they can. And I think they’ll look to midterms and make an estimation on what the prospect of a second Morena term might mean for the investment climate in Mexico.

Today, if you took a snapshot or a poll, you would probably think that the likeliest option is that there will be a second Morena term given the level of disarray in the opposition parties PRI and PAN. It’s not a certainty, but something you’d have to think about. But I think it’s early to tell. Investors want to see the rule of law. They want to see integrity in regulation, and they will see whether that’s a prospect.

For the solar and wind companies, if your project has not gotten off the ground yet, then you need to think seriously about whether you’re going to be able to go forward. And if you can, you will wait until the judicial process matures and the elections pass before you make a decision. And for the other companies, I think they really need to see whether these problems can be worked out, which they hope is the case.

I think the real risk is whether manufacturing and other companies are able to stay or expand; the companies outside the energy sector. The automobile companies and the Wal-Marts, for example, have significant internal pressure to green their value chains and if they cannot have access to low carbon power as they manufacture their products and export them, it creates a serious risk and it may not be viable for them to expand their operations. I think that’s the real risk to Mexico, that they need to look at in terms of the investment climate.

There’s a lot of competition. President Biden, like Trump, wants all this manufacturing to come back to the United States. They’d love to have these plants built in the U.S. with union labor rather than built in Mexico. So, it’s a choice, and Mexico is going to have to compete.

NGI: What do you see as the biggest challenge currently in the Mexico-U.S. energy relationship?

Goldwyn: It’s lack of communication, and not for lack of trying on the U.S. part. The reality is that there is not a lot of dialogue between our ministries. There’s not a lot of desire for engagement or maybe capacity for engagement on the Mexican side. I know the folks at Energy Ministry Sener would love to have technical talks on a lot of these issues in electricity and storage and gas. I know that the State Department, I’m sure, would also want to engage in these talks. There’s just not a lot of interest so far and I think better communication would help. My own view is that we would be better off broadening the table and maybe having some multilateral conversations, maybe with the Inter-American Development Bank that would expose Mexico to how some peer countries have addressed some of the similar problems.

I actually wrote a paper last year for the Atlantic Council about a new energy strategy for the Western Hemisphere, which laid out a roadmap for how we can do this for the whole hemisphere. Part of the idea behind that was for countries like Mexico, where the bilateral conversation can be fraught, to be part of a multilateral conversation. But communication is the problem. More of it is needed and more of it will make things better.

Editor’s Note: NGI’s Mexico Gas Price Index, a leader tracking Mexico natural gas market reform, offers the above question-and-answer (Q&A) column as part of a regular interview series with experts in the Mexican natural gas market. Goldwyn is the 52nd expert to participate in the series. This is part two in a two-part interview.