Natural gas marketers in Mexico transacted an average volume of 6.69 Bcf/d during the second half of 2018 (2H2018), up 35% from the 4.96 Bcf/d averaged in the year-earlier period, with December deals surging, according to the latest IPGN monthly natural gas price index published by the ComisiÃ³n Reguladora de EnergÃ­a (CRE). 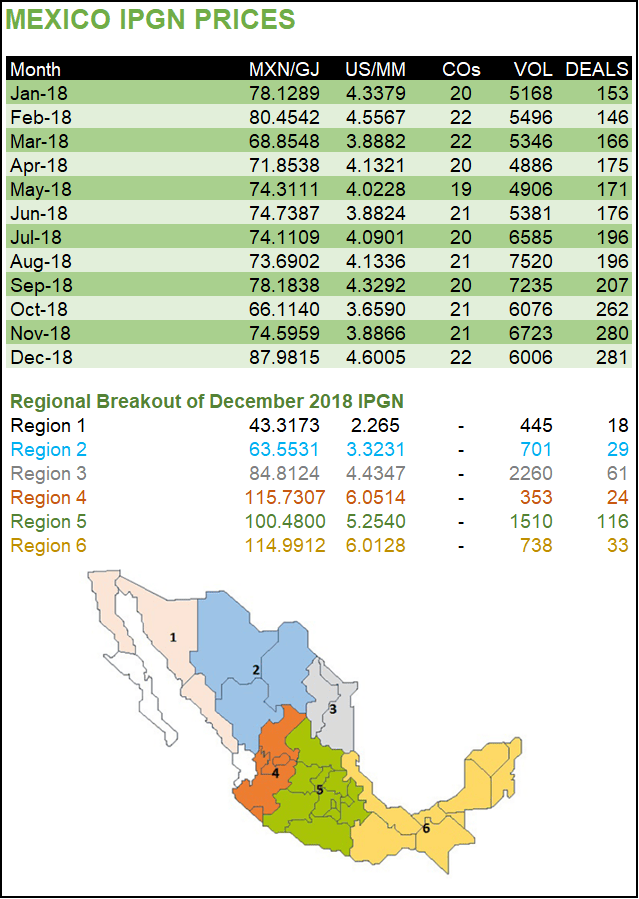 The IPGN, which CRE first published in July 2017, compiles post-transaction prices reported by marketers, and is designed to serve as a reference until Mexico’s nascent gas market attains enough liquidity and transparency for daily third-party indexes to emerge.

Because of Mexico’s growing reliance on pipeline imports from the United States, transactions in Mexico are typically priced using a U.S. benchmark such as Henry Hub or Houston Ship Channel, plus the cost of transporting the molecule.

“The growth in volumes and deals in Mexico during the second half of 2018 is impressive, and it shows that existing companies are becoming more comfortable with the new system,” NGI’s Patrick Rau, director of strategy and research, said. “But the key statistic in my mind is the number of companies that contribute data to CRE, and unfortunately, that has been stuck at either side of 20 for more than a year.”

U.S. natural gas pipeline exports to Mexico averaged 4.85 Bcf/d in October 2018, up 13% year-on-year, according to the Energy Information Administration (EIA).

In the reference case of EIA’s Annual Energy Outlook 2019 published earlier in January, U.S. pipeline and liquefied natural gas (LNG) exports to Canada and Mexico are expected to “increase until 2030 and then flatten through 2050,” with Mexican gas production not expected to begin displacing U.S. imports until 2030.

Mexico has added nearly 3,000 miles of new gas pipelines since 2012 to meet rising demand, driven mainly by the power sector.

The energy reform mandated the creation of a competitive, transparent natural gas market, in which private sector firms could compete on a level playing field against Pemex and CFE. Steps taken by the previous administration to achieve this goal include awarding capacity rights on the Sistrangas (Mexico’s legacy natural gas pipeline grid that was formerly controlled by Pemex), a tender for natural gas import capacity, a mandate for Pemex to cede 70% of its marketing contract portfolio, and publishing a natural gas storage policy.

The government of President AndrÃ©s Manuel LÃ³pez Obrador, who took office in December, has offered few concrete signals as to whether it will continue with these and other market-oriented policies in the natural gas segment.

“Total traded volumes within Mexico likely can only grow so much if more marketing companies do not establish a presence in the country,” Rau said, “and that probably will not happen to any large extent until things become more clear following [LÃ³pez Obrador] taking office in December.”

Pemex, which supplies essentially all of Mexico’s natural gas output, reported gross gas production of 3.81 Bcf/d in December, up from 3.76 Bcf/d in the preceding month, but down from a peak of 6.52 Bcf/d in 2009.

The IPGN breaks Mexico down into six trading regions. More than half of December’s traded volumes occurred in regions 3 and 5, which accounted for 37.6% and 25.1% of the total volume, respectively. Region 3 includes the northeastern border states of Tamaulipas and Nuevo LeÃ³n, which are adjacent to South Texas, while region 5 contains capital Mexico City.