After jumping on Monday, U.S. natural gas prices at locations key to Mexico came back to earth through Thursday on the back of weather-driven demand uncertainty. 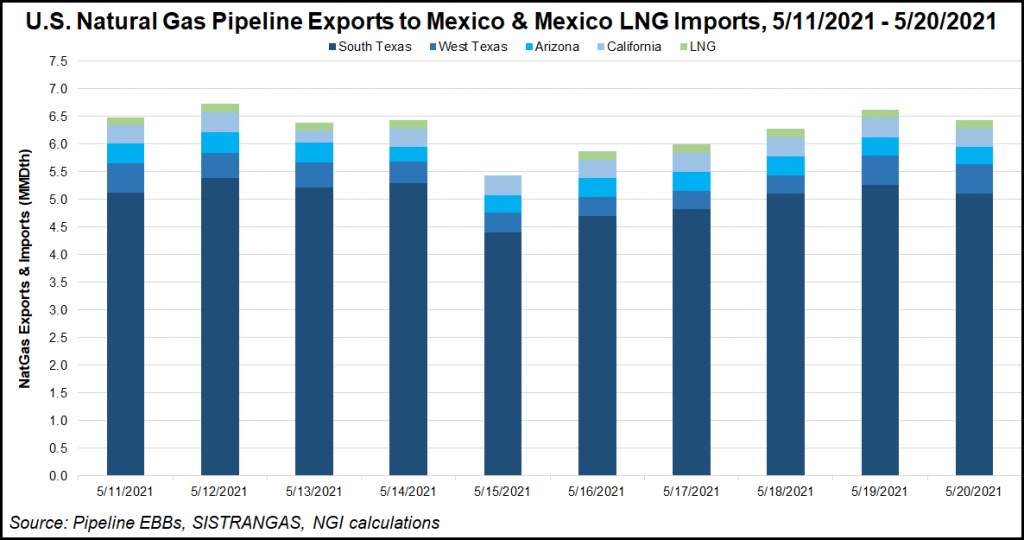 Import flows were highest on the Sur de Texas-Tuxpan marine pipeline, averaging over 900 MMcf/d over the past week.

The Mexican economy grew 0.4% in the first quarter. After contracting for two years, Mexico’s economy should grow by 4.5% this year, according to the latest Central Bank survey of economists.

The coronavirus outlook is also improving dramatically. New coronavirus cases in Mexico on Wednesday were 2,000, compared to 3,009 a week earlier on May 12, with 8.73% of the population fully vaccinated, according to data provided by Johns Hopkins University.

Mexico’s coronavirus czar Hugo López-Gatell said on Tuesday at least half of the Mexican population had developed Covid-19 immunity and he foresaw herd immunity by September.

Mexico gas production fed into the national pipeline system Sistrangas fell to 1.206 Bcf on Wednesday compared with 1.390 Bcf a week earlier (May 12). The processing centers at Nuevo Pemex (341 MMcf), Burgos (310 MMcf) and Cactus (227 MMcf) in the southeastern part of Mexico were the leading injection points.

The five-day line-pack average on the Sistrangas was 6.864 Bcf on Wednesday (May 19) compared with 6.910 Bcf a week earlier, according to the Gadex consultancy in Mexico City.

The ideal line pack for Sistrangas is 6.86-7.29 Bcf/d to guarantee sufficient pressure in the system. Demand on the Sistrangas fell week/week and was 4.488 Bcf on Wednesday (May 19) compared with 4.832 Bcf a week earlier.

In pipeline news, the Cempoala-Emiliano Zapata section of the Cempoala-Santa Ana pipeline is scheduled to undergo maintenance on Tuesday (May 25).

In Mexico, natural gas spot prices fell in the industrial northeast, with Los Ramones down 4.2 cents at close on Thursday to $3.120. Monterrey shed 4.1 cents to $3.035.

On the Yucatán Peninsula, the cash price at Mérida closed at $4.312 on Thursday, down 4.6 cents. The Merida price is estimated using the price at Cactus and adding pipeline transportation costs to Mérida via the Mayakan pipeline.

On Thursday, the U.S. Energy Information Administration (EIA) reported a high-side 71 Bcf build to underground storage for the week ending May 14.

The South Central build of 31 Bcf led all regions and included a 20 Bcf injection into nonsalt facilities and an increase of 11 Bcf into salts. This is the region most relevant to Mexico, which has no underground gas storage facilities.

This week, Mexico’s energy regulator Comision Reguladora de Energia (CRE) declared 139 oil and gas permits as expired. Most of those permits were for supplying fuels. The move is part of a new amendment to the nation’s Hydrocarbons Law, which grants the state sweeping powers to grant and revoke permits.

Analysts at Fitch Ratings said gas pipelines are less likely to be targeted under the new law than other segments of the hydrocarbons market. Next up are the June 6 midterm elections, which could have important ramifications for the energy sector.