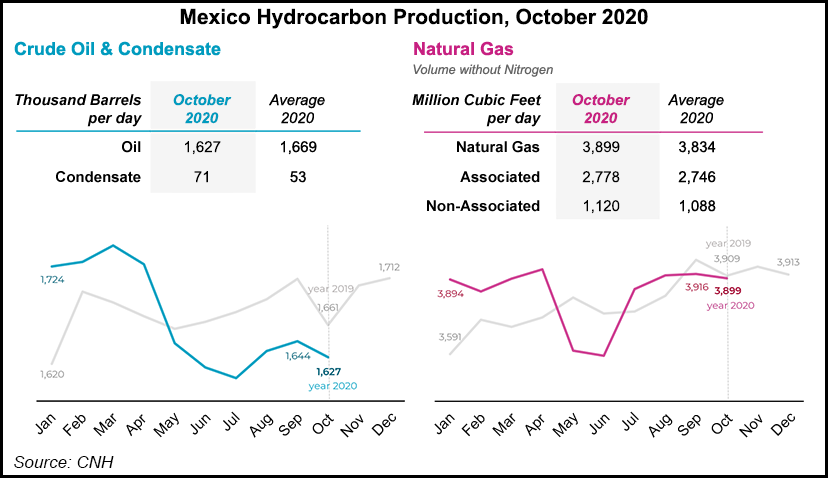 State oil company Petróleos Mexicanos (Pemex) accounted for 3.68 Bcf/d of the total, the same amount it produced in the year-ago month.

Dry gas production from Pemex processing centers averaged 2.18 Bcf/d, down from 2.3 Bcf/d in October 2019, according to company data.

The dry gas figure is a more precise reflection of the volumes that make it to the local market, as the figure does not include liquids, water and other impurities, nor the gas that Pemex re-injects into oil wells to increase pressure and stimulate production.

Private sector operators, for their part, produced 218.2 MMcf/d in October, down from 227 MMcf/d in the year-ago month, CNH data show.

Pemex has struggled to maintain oil and associated natural gas output in recent years, due in part to budgetary constraints and the natural decline of legacy shallow water fields such as Cantarell and Ku-Maloob-Zaap.

Although basins such as the Burgos, Tampico-Misantla and Veracruz hold immense prospective non-associated gas resources, Pemex has historically dedicated most of its upstream capital budget to oil-directed drilling, a trend that has continued under current president Andrés Manuel López Obrador.

“There is absolutely nothing on the table…this government is not doing anything to increase domestic production of gas,” energy analyst Rosaney Barrios told NGI’s Mexico GPI in a recent interview.

As a result, Mexico has increasingly relied on pipeline gas imports from the United States.

Genscape Inc. natural gas analyst Ricardo Falcón told NGI’s Mexico GPI on Monday that pipeline gas flows from the United States to Mexico were averaging close to 5.5 Bcf/d month-to-date in November, up slightly over 3% from November 2019.

The difference “is primarily associated with activity at the Wahalajara system, both via direct imports from the U.S. and through receipts from other Mexican pipelines with access to Permian gas molecules,” he said.

Due to Mexico’s dependence on U.S. gas, transactions in Mexico are typically linked to liquid U.S. trading locations such as Henry Hub, Waha or Houston Ship Channel.

Pemex reported crude oil exports of 908,000 b/d for October, their lowest level since 1980 according to local media.

Although President Andrés Manuel López Obrador has suspended bid rounds and farm-out tenders for stakes in Pemex-operated blocks, the secondary market for oil and gas acreage in Mexico remains active.

Under the agreement, which is pending regulatory approval, CNOOC Mexico will retain a 40% working interest and operatorship of the block, according to Mexico’s oil and gas association Amexhi.