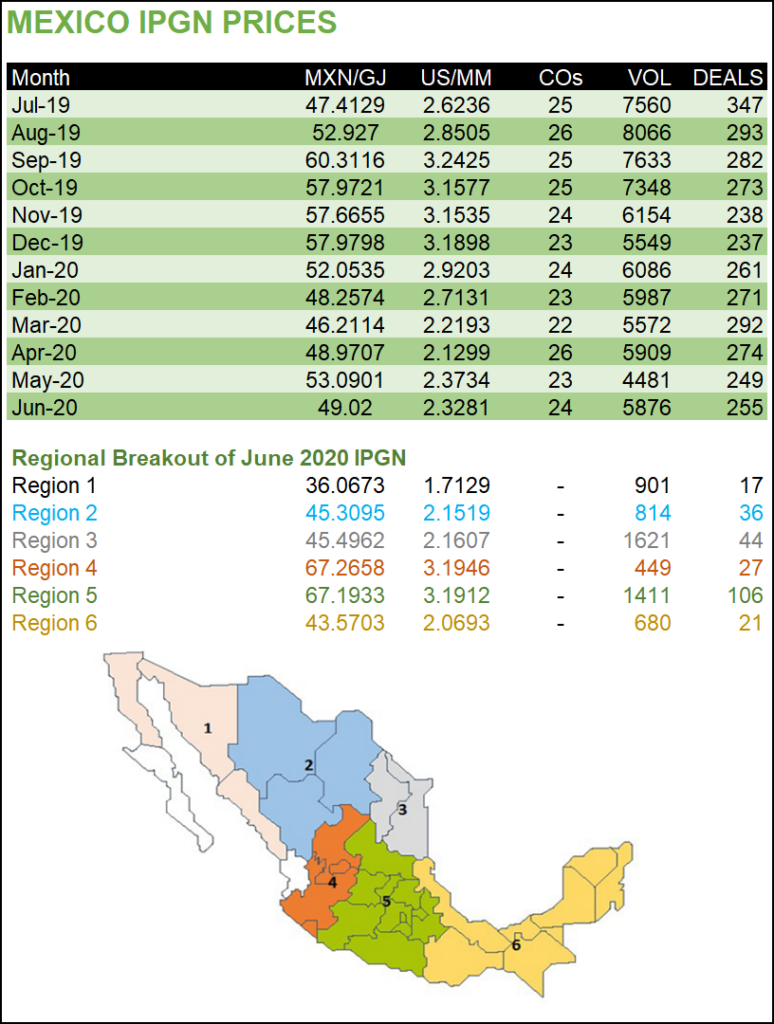 Marketers transacted 5.88 Bcf/d of the molecule, compared to 7.37 Bcf/d in the year-ago month, CRE data show.

CRE used 255 transactions from 24 companies to calculate this month’s index, versus 238 deals from 21 companies a year ago.

CRE started publishing the index in July 2017 under the framework of Mexico’s 2013-2014 energy reform, which liberalized the formerly state-dominated natural gas market.

The latest data comes amid surging pipeline gas imports from the United States, which averaged an all-time high 6.4 Bcf/d for the July 20-24 period, according to Genscape Inc.

Due to Mexico’s dependence on U.S. imports, a majority of gas transactions in Mexico are linked to U.S. pricing locations such as Henry Hub, Waha and Houston Ship Channel.

Following the recent completion of Fermaca’s Waha-to-Guadalajara pipeline, gas flows from West Texas to Mexico could average as much as 1.5 Bcf/d throughout the second half of 2020 and full-year 2021, about double the current amount, according to a recent analysis by Rystad Energy.

Mexico’s natural gas production averaged 3.58 Bcf/d in June, down from 3.76 Bcf/d a year ago, according to data from upstream oil and gas regulator Comisión Nacional de Hidrocarburos (CNH).

Output from projects operated by Pemex totaled 3.35 Bcf/d, down from 3.56 Bcf/d.

In related news, CNH published on Monday an agreement to suspend the deadlines associated with approved exploration, appraisal and development plans for operators in response to the Covid-19 pandemic.

CNH said it had received multiple requests from operators to suspend exploration and production activity, citing the pandemic and subsequent economic slowdown as grounds to declare force majeure.